Home » Car Reviews » Mini Is Working on an Electric JCW Model, but When Will We See It?

Mini Is Working on an Electric JCW Model, but When Will We See It?

We knew it wouldn’t be long after the Mini Cooper SE’s debut that we’d see a John Cooper Works version, and this week the Anglo-Germanic automaker has revealed that it is working on just such a vehicle.

But will we see them in this generation Cooper platform, or the next?

Mini says it is “working to develop concepts” for JCW models that are electric, amid plans to offer new gas and electric crossovers. The automaker is also working on a new electric city car that could be smaller in size than the basic Cooper hatch, in production since 2014. So there is still a role for gas-powered models to play in Mini’s lineup for the next few years, even as Mini redesigns much of its model range.

“John Cooper Works models with conventional combustion engines will still continue to have an important role to play, to make sure we’re addressing the wishes and needs of performance enthusiasts all around the world,” says Mini boss Bernd Körber. “With this new focus on electric performance, we’re also creating the opportunity to sharpen the distinctive profile of the John Cooper Works brand more than ever before.” 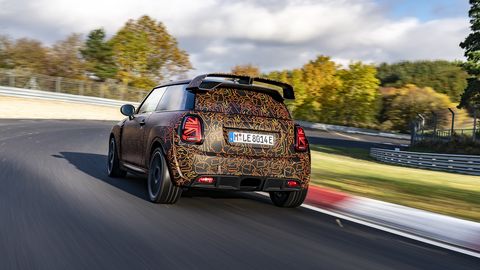 The debut of the Mini Cooper SE, on the other hand, should not be viewed as the next electric Mini JCW’s starting point. That’s because the SE was based on the 2014-generation gas-engined Coopers, due for replacement sometime in the first half of this decade. So Mini would not be seeking to launch an electric JCW model if today’s generation of hatches is in its final years on the shelf.

“With the Mini Electric, we’ve shown how well brand-typical driving enjoyment and electric mobility can be combined,” says Körber. “Now it’s time to translate the passion for performance of the John Cooper Works brand to electromobility. That’s why we’re working to develop concepts for electric John Cooper Works models.”

The Mini lineup is about to go through one of its biggest evolutions since BMW relaunched the former Rover Group model as a standalone brand, and electrifying the range is just one part of it. Entirely new models are on the way, including a crossover and a small MPV that could be badged as the Mini Traveller.

“Based on a new vehicle architecture, developed from the ground up for pure e-mobility, battery-electric vehicles will be produced in China from 2023, in cooperation with the local manufacturer Great Wall Motor,” the automaker said a month ago.