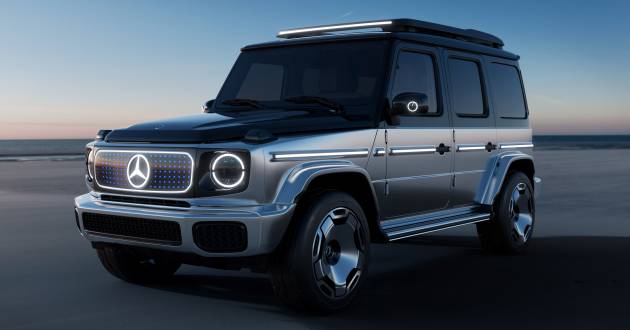 Joining the many world premieres by Mercedes-Benz at IAA Mobility 2021 (aka the Munich Motor Show) is the Concept EQG, but before we proceed further, a little backstory. When the second-generation G-Class was first unveiled in Detroit in January 2018, Hollywood superstar Arnold Schwarzenegger was present on stage to chat with then Daimler AG board chairman Dieter Zetsche.

At the time, the Terminator and Predator killer elicited a rather surprising promise from Zetsche that the upcoming electrification of all model series in the Mercedes-Benz stable would include the G-Class. Now, three and a half years later, the German carmaker is making good on this promise to Mr Freeze, and the Concept EQG serves as a near-production study of an all-electric G-Class.

Design-wise, the Concept EQG adopts the regular G-Class’ angular silhouette, but with plenty of distinctive touches to mark it out as an EQ project, while giving some serious cyberpunk vibes. First up, the front grille has been swapped out for a black panel with an illuminated border and blue rounded squares (adorably called a squircle pattern).

Below the grille is a slim intake, while further down, the lower apron features inlets that sport a squircle mesh design. The headlamps are familiar-looking items, although they do receive additional garnish to match the new grille. 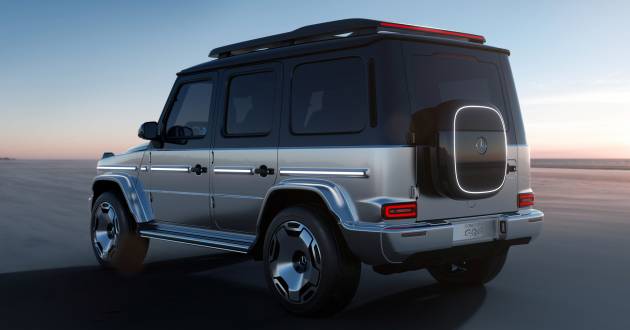 Lighting is a big part of the Concept EQG’s design, as you’ll find white illuminated circles on the exterior mirror housings, while the illuminated side stripes make the robust exterior protective strips stand out visually. At the rear, the usual round spare wheel cover has been replaced with a lockable storage box, which is styled to look like a wallbox charger, and comes with illuminated accents to match with everything else that glows white on the outside.

Mercedes-Benz says you can use the box to store a charging cable, but we’re certain you can shove in a tyre repair kit too. Since there’s no engine under the bonnet, perhaps we’ll get even more storage space in the vacant lot too.

Finishing touches include a set of 22-inch polished aluminium alloy wheels that look properly imposing, while the two-tone paint finish of gloss black on top and gloss aluminum beam on the bottom give the vehicle a striking appearance.

The company is also particularly proud of the flat roof rack in high-gloss black, which boasts a centrally shaped “G” and a thin LED light strip to remind you that even though this is an EV, it’s still up to the task when it comes to demanding off-road activities. No interior shots just yet, but expect it to be like the exterior: similar to the G-Class but with EQ cues.

Mercedes-Benz says the concept uses the same ladder-frame construction as the regular G-Class, but the suspension setup of an independent setup at the front axle and a rigid rear axle has been tweaked to allow for the integration of the electric drive system.

Said system is made up of four electric motors located close to the wheels and are individually controllable, but that’s not all. The company also says as with any real 4×4, the Concept EQG’s off-road reduction can be activated via a shiftable two-speed gearbox for confidence off-road.

It adds that an electric drive system is a good fit for an off-roader like the G-Class, as the batteries integrated into the ladder frame will result in low centre of gravity. The instant torque delivered by electric motors also help with pulling power and controllability. No mention about the added weight that comes with said batteries and electric motors, or even range for that matter.

Ahead of the production version’s debut, prototypes of the fully electric G-Class will tackle a 5.6-km test track on the 1,445-metre high Schöckl mountain in Graz, which features gradients of up to 60 degrees. Only when the engineers are satisfied will the EQG get the “Schöckl proved” quality certificate that is obligatory for the W463 series.

“Wherever market conditions permit, Mercedes-Benz will be ready to go fully electric by the end of the decade,” said Markus Schäfer, member of the board of management of Daimler AG and COO of Mercedes-Benz Cars.

“With this strategic step from ‘electric first’ to ‘electric only’, including sustainable production and the CO2-neutral life cycle of our batteries, we are accelerating the transformation to a zero-emission and software-driven future. We want to inspire our customers to switch to electric mobility with convincing products. An icon like the G-Class fulfils this task perfectly,” he added.