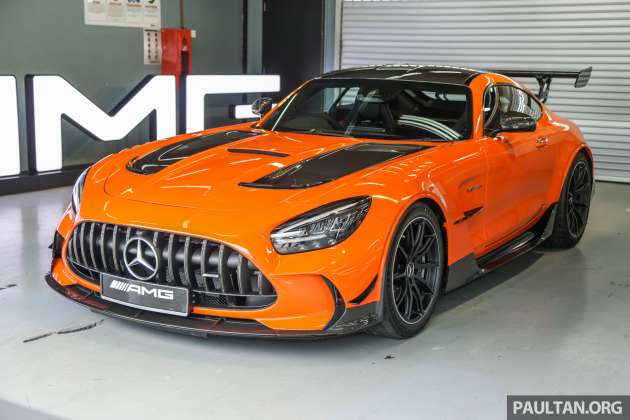 At today’s launch of the CKD baby AMGs, a beast from Affalterbach was lurking in the shadows. ‘Beast’ is an often used word these days, but it’s the most apt description for the Mercedes-AMG GT Black Series, surely the craziest road-going car you can buy from the marque today.

Once the fastest production car on the Nürburgring-Nordschleife with a lap time of 6:48.047, this extreme GT has the most powerful AMG V8 series engine of all time, the most expressive design, the most elaborate aerodynamics and the most intelligent material mix. It’s also the closest thing to the AMG GT3 race car.

Let’s start with the engine, which is based on the familiar AMG 4.0 litre twin-turbo V8 with dry sump lubrication, but with a flat-plane crankshaft instead of the conventional cross-plane layout. 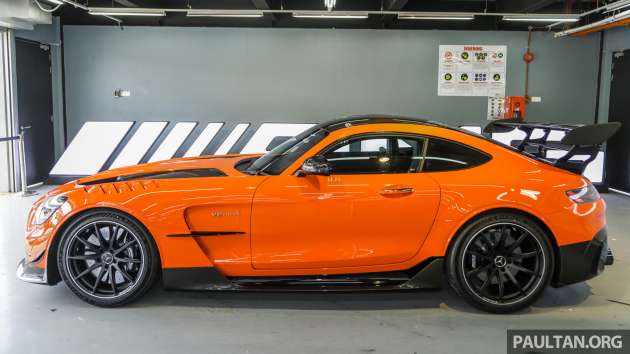 Flat-plane is not new (the Porsche 918 Spyder and Ford Mustang Shelby GT350/GT350R are examples of cars with flat-plane engines), but it’s pretty rare. Here, the crankpins of the crankshaft are arranged on the same plane with a 180-degree offset (this is where the flat in the name comes from) instead of 90 degrees.

The flat-plane benefit is that the engine is more responsive, while providing improved smoothness and high torque at low rotational speeds. The new firing order (1-8-2-7-4-5-3-6), where ignition jumps from one cylinder bank to the next, also improves the gas cycle, exiting via a new twin-pipe exhaust system made of thin-walled stainless steel, its maker says. AMG also moved the exhaust side into the hot internal V of the two cylinder banks in the engine.

Other changes include new camshafts and exhaust manifolds, a larger intercooler and larger compressor wheels for the two turbochargers, which can now shift 1,100 kg of air per hour compared to 900 kg an hour in the GT R. Due to the extensive mods, this engines gets a new internal code – M178 LS2.

With such a big advantage over the GT R, the century sprint is dispatched in just 3.2 seconds (0-200 km/h under nine seconds) and top speed is 325 km/h. The Black Series’ flat-plane V8 does this while having a “completely independent character” in terms of power delivery and sound pattern, too.

All that power goes to the rear wheels via a seven-speed AMG Speedshift DCT 7G dual-clutch transmission, which has been adapted for the increased torque. The previous limits governing shift performance and response time have been extended, which benefits circuit driving. Also, transmission cooling has been upgraded and the ratios have been slightly modified. The Race Start function gets increased starting revs and more sensitive wheel slip control. 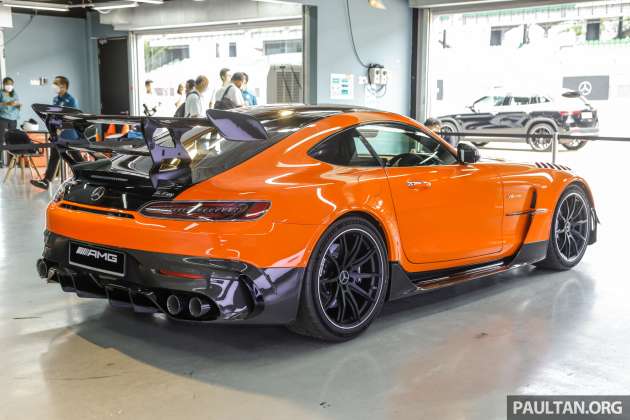 The ‘torque tube’, a structural component of the transaxle drivetrain that connects the engine and transmission, is made of carbon fibre. At 13.9 kg, it’s around 40% lighter than the standard aluminium unit. Other weight saving measures include CF for the roof and tailgate, and “lightweight thin glass” for the front and rear screens. The coiled CF transmission mount is another exclusive Black Series part.

Moving to the chassis, the wishbones, steering knuckles and hub carriers on both axles are made entirely from forged aluminium to reduce unsprung mass. Adjustable coilovers from the GT R is paired with AMG Ride Control adaptive damping, with several drives modes available via the AMG Dynamic Select system. The configurability extends to the camber and anti-roll bars for precise tuning for track work. The AMG Traction Control has nine levels of ESP intervention – Level 9 means zero ESP.

Ten-spoke forged wheels and a ceramic compound brake system with with motorsport brake pads and discs are at each corner.

Even if your eyesight isn’t the best, it’s clear that the Black Series is an aero monster, no thanks to that elaborate contraption that resembles a rear wing.

The aerofoil contributes to a downforce of well over 400 kg at 250 km/h, with a larger upper blade and smaller one just beneath it – both are manually adjustable. The flap on the upper blade is adjustable by 20 degrees, either by pushing a button (DRS-style) or letting the car self-adjust.

Elsewhere, there’s a larger front grille, vented carbon fibre bonnet, a manually adjustable splitter on the front apron (Street and Race settings), a diffuser that can be lowered to enhance the Venturi effect, louvres on the front fenders, larger side sill panels that merge into the side blades, a double rear diffuser and side wheel arch ventilators. The underbody is almost fully covered, with longitudinal fins to optimise air flow. 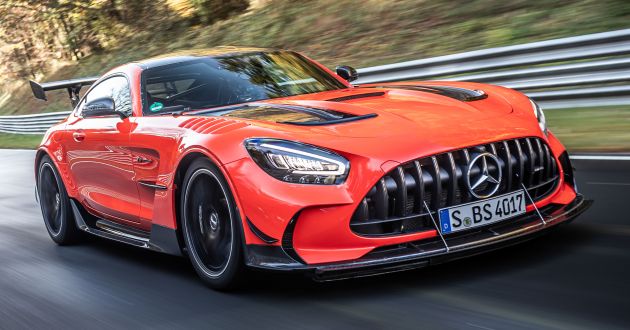 It’s all very race car so far, but mega-rich owners will be thankful that the Black Series isn’t as spartan as the AMG GT3 inside. One gets AMG Performance seats, a 12.3-inch digital instrument cluster, a 10.25-inch touchscreen infotainment system, and an AMG Performance steering wheel. Surfaces are covered with a mix of Nappa leather and Dinamica microfibre, with orange topstitching.

The optional AMG Track Package adds on race essentials such as titanium roll bars, four-point seatbelts and a fire extinguisher.

The ultimate AMG GT is yours from RM3 million, except that it cannot be yours, at least not from MBM, because the company says that all 13 units allocated to Malaysia have already been spoken for.