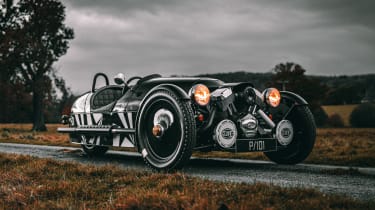 Morgan has unveiled a special edition version of the 3-Wheeler to mark the end of the car’s production cycle. It’s called the P101, as a nod to the internal codename used by Morgan’s engineers prior to the car’s debut.

Production will be limited to just 33 examples worldwide, most of which have already been allocated to buyers in the UK and USA. Each model will be priced from £45,000, with first deliveries expected to arrive next year.

Styling revisions over the standard Morgan 3-Wheeler include a new single-piece tonneau cover for the passenger seat, a pair of nine-inch Hella fog lamps up front and a fresh set of “Aerodisc” wheels for the front axle, which Morgan says help to reduce drag.

Look closer, though, and you’ll see the P101 is littered with finer details. The exhausts, for example, have been ceramic coated for better heat insulation and are different colours on each side of the car. Each car also comes with new body-coloured fly screens, torque markers for the front tyres and “P101” badging for the bodywork and dashboard.

Buyers can even spec a choice four unique graphics for the P101’s body work, each of which has its own amusing nameplate. “The Dazzleship” (pictured above) features a black and white design, inspired by the graphic camouflage used on military vehicles.

“The Belly Tank” colour scheme pays homage to the belly tank salt flat racers from the late 1940s, most of which were pieced together using leftover WWII aeroplane parts. Morgan also says these hot-rods provided the inspiration for the 3-Wheeler family. 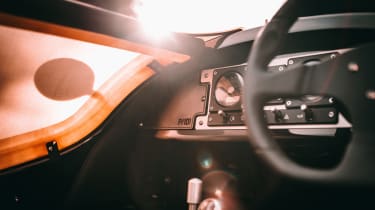 Morgan says “The Aviator” livery is inspired by the nose-cone art painted on WWII-era RAF fighter planes. Finally, “The Race Car” features stripes and roundels, which pay homage to the racing colours that featured on early Morgan track cars.

Like the standard Morgan 3-Wheeler, the P101 is powered by a 2.0-litre twin-cylinder petrol engine, which develops 82bhp and 140Nm of torque. The unit sends drive to a single rear wheel via a five-speed manual gearbox – and the British brand says the system will provide a 0–62mph time of six seconds and a top speed of 115mph.

The future of the Morgan 3-Wheeler

The limited edition 3-Wheeler P101 marks the end of an era for Morgan – the car has been one of the firm’s all-time most successful models, with 2,500 examples sold since its launch in 2011. However, Morgan has confirmed that the 3-Wheeler will soon make a comeback.

For now, the British brand is remaining tight-lipped on how the second-generation model will look – but a spokesman for the brand has confirmed that the company “isn’t done with petrol power just yet.” However, one thing that’s certain is that it won’t be powered by the same engine used in the current car, due to tightening emissions regulations.

What do you make of the special edition Morgan 3-Wheeler P101? Let us know in the comments section below…

Related posts:
New 2021 Nissan Qashqai to go hybrid only
There's a Ruined AMC Dealership That's Actually Still Open in North Carolina
Best News
Audi Is Leaving Formula E
12/01/2020
FBI: No crime committed as ‘noose’ rope was there in 2019
06/23/2020
Why VW Pulled The Plug On A 400bhp VR6 Arteon R
06/23/2020
2021 Kia Grand Carnival breaks cover – solid looker! – paultan.org
06/24/2020
New Volkswagen Arteon Shooting Brake arrives as part of facelifted line-up
06/24/2020
Recent Posts
This website uses cookies to improve your user experience and to provide you with advertisements that are relevant to your interests. By continuing to browse the site you are agreeing to our use of cookies.Ok