It’s a little out of its usual sequence, but the latest GT Sport Time Trials have also arrived today.

Usually the TT events appear every other Thursday. They have been delayed slightly in the past, but the events which should have gone up on July 16 have instead arrived four days later — without any explanation at this point. In addition, the first event has already been replaced, with a Gr.3 Time Trial at Blue Moon Bay causing the game to crash on entry.

That means that the current set will only run for the next ten days, until July 30, giving you a slightly shorter window to compete in the global challenge. Fortunately, one of the events only requires a 22-second lap, and the other isn’t exactly a lengthy course either!

For the normal, non-tuning event, you’ll be tackling the Tsukuba Circuit. Probably best known as a time attack course from Japan’s Best Motoring, Tsukuba is a relatively short and simple circuit, with just four braking zones — you can get away with a lift under the Dunlop bridge — and lap times of just over a minute (though the quickest road cars can duck under that mark). You’ll be able to choose between the Subaru BRZ and its stablemate the Toyota 86GT for this time trial.

The tuning event takes a bit of a strange twist this week, with a rarely seen circuit and an equally rare car. It takes place at the fictional Northern Isle Speedway, a half-mile oval which bears more than a passing resemblance to the real-world Bristol Motor Speedway. Your steed will be BMW’s electric compact car, the i3.

While tuning is enabled for this event, you won’t need to worry about gearbox tuning as the i3’s transmission is locked down. This means that all of your focus will need to be on the suspension and differential, as you’ll need to try to reduce the speed loss through the banked oval. If nothing else it’s likely to see the tightest leaderboard ever recorded in one of these events.

GT Sport‘s Time Trial mode is a global competition, ranking your best time against all players worldwide, rather than just those in your region as with other Sport Mode events. These two time trials will run through to July 16, when two further events will replace them. 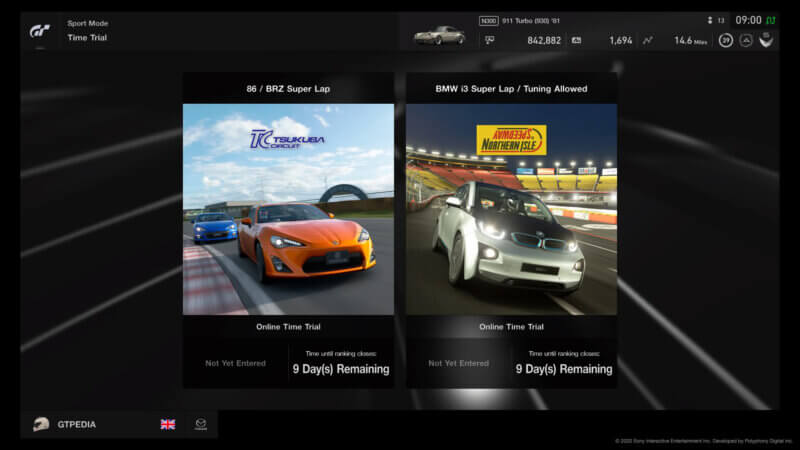