The follow-up on the fantastic T.50 from Gordon Murray Automotive is officially here. The T.33 isn’t quite as hardcore as its sibling, but with a naturally-aspirated 607-horsepower (453-kilowatt) 3.9-liter V12 turning the rear wheels in a 2,400-pound supercar, hardcore is a relative term here.

Let’s jump right to the heart of the T.33, which is a tweaked version of the same Cosworth-sourced V12 engine used in the T.50. It doesn’t rev quite as high in the T.33, but we’re still talking about an 11,100-rpm redline. Peak power arrives at a suborbital 10,500 revs, with 333 pound-feet (451 Newton-meters) of peak torque arriving at 9,500 rpm. GMA says 75 percent of that torque is available at 2,500 rpm, so you don’t necessarily need to sing soprano for a leisurely cruise around town. Compared to the 12,100-rpm limit in the T.50, the T.33 is a bit more comfortable at lower revs but make no mistake – this is still a high-strung machine.

Power goes to only the rear wheels through a six-speed transmission, and manual fans rejoice! The standard gearbox will be a proper three-pedal stick-shift, with a six-speed paddle-shift transmission available as an option. GMA says the Xtrac paddle-shift box is both the world’s lightest supercar gearbox at 172 pounds, and the quickest-shifting. The engine is also lightweight at 392 pounds, and with everything bolted into a carbon fiber monocoque chassis that makes prolific use of aluminum, the T.33 has a better power-to-weight ratio than the mighty McLaren F1.

GMA doesn’t share performance stats, but it’s safe to assume this car is fast. It should also handle quite well, as considerable attention is given to the T.33’s aerodynamics. You won’t find the T.50’s clever fan at the back, but a ground effect inlet at the front sends air under the car in an efficient manner to a diffuser at the back. The clean shape is such that a plethora of wings and other vents aren’t required, though you will find an active spoiler at the back which deploys automatically at speed, or manually upon the driver’s command. Staggered wheels measuring 19 inches in front and 20 inches at the back wear Michelin 4S tires. 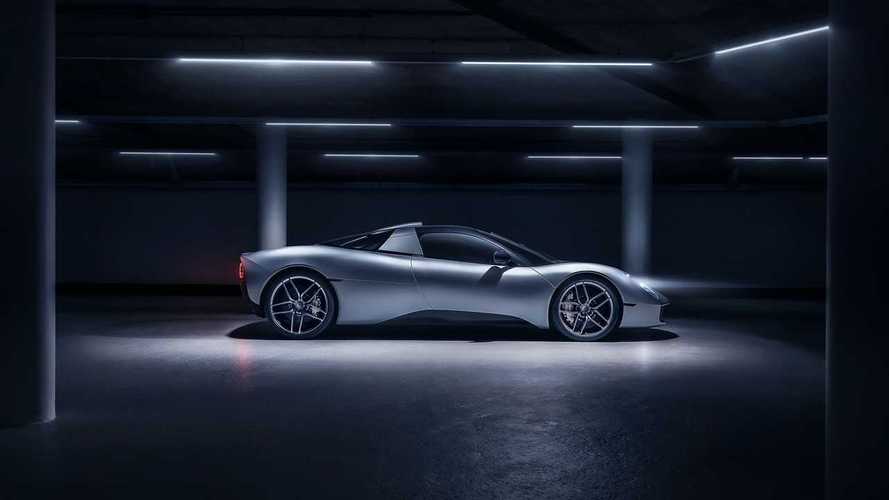 Moving inside, you’ll find a rather simple greenhouse that’s completely devoid of touchscreens. The minimalist approach is dedicated to driver focus, though you’ll still find a handsome mix of premium materials such as aluminum and carbon fiber. An analog rpm gauge holds center stage in front of the driver, and fitted with the standard manual transmission, the T.33 is very much an analog car in the age of digital.

It’s not completely devoid of features, however, as you’ll find Apple CarPlay and Android Auto on-board. There’s also nearly 10 cubic feet of total storage space, and with an estimated range of 400 miles on a tank of fuel, the T.33 could be a pleasant grand touring machine for two.

It will also be an expensive mid-engine GT. Pricing starts at £1.37 million, which currently equals $1.8 million in US currency. GMA does say the T.33 will be available in global markets with either left-hand or right-hand drive, and the company is currently taking inquiries from interested buyers.