‘Get rid of car smells’ with cheap kitchen item 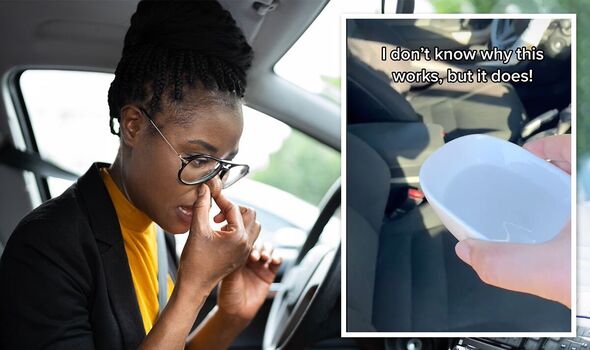 Bad smells can form in your car for a number of reasons, but instead of dishing them with air freshener, a woman has found a solution that she says gets rid of bad smells altogether. An eco-friendly cleaning expert from the @brightly.eco page on TikTok shared her odour-eliminating hack in a video for the page’s audience of 618K followers.

“I don’t know why this works but it does,” she said. “If your car is having some kind of funky smells put about a cup of white distilled vinegar in there, let it sit for a few hours or while you’re at work.

“Then just let it air out while you finish cleaning your car and the smell is gone.” She added: “It’s so easy.” Distilled vinegar is often recommended for a number of multi-purpose cleaning uses.

Despite vinegar’s well-known smell, surprisingly it does work as an odour eliminator – not just in the car, but in other areas of your home too. Experts from thekitchn.com explained that it is the acetic acid in vinegar which works to neutralise alkaline odours.

Some people make a diluted solution of vinegar and keep it in a spray bottle to mist around the space, which covers a lot of area at once. Alternatively, if you know where the source of the smell is coming from, place a small bowl of vinegar close to the area. The worse the smell is, the longer you should leave the white vinegar to work its magic.

When using distilled vinegar as an odour neutraliser, you should make sure to open your car windows so that fresh air can circulate. The vinegar smell will then go away on its own as the fresh air comes in.

Despite this, a user named Ian said there is scientific evidence that this hack works. He wrote: “Vinegar is five percent acetic acid which bonds well to most volatile molecules. Basically, it traps all of the bad-smelling bits in the air.”

For those who aren’t too keen on the idea of using vinegar, other users shared their odour-neutralising hacks. One commenter recommended using baking soda.

They wrote: “Use baking soda everywhere and vacuum it up. Baking soda is a deodoriser. I’ve used it to make my room and car smell fresh. The longer you leave it the better though, especially if the smell is strong.”

Distilled vinegar is not only eco-friendly, offering a great alternative to chemical cleaners, it can also be purchased for as little as 29p in supermarkets such as Tesco.

If you notice a bad smell in your car, simply fill a small bowl with white distilled vinegar. You can create a solution of half water and half distilled vinegar if you are overly concerned about the strong smell.

Next, leave the bowl in your car for between 15 minutes and a few hours, depending on how strong the odour is. If you know where the smell is coming from, place the bowl of vinegar next to this spot.

Once the vinegar has had time to work, return to the car and air it out to allow any residual smell to escape. It’s a good idea to do this process while cleaning your car.  Alternatively, experts from The Spruce recommend making an odour eliminating spray using white vinegar and essential oils.

Fill either a plant mister or a spray bottle with an adjustable stream with undiluted distilled vinegar and combine with a few drops of your favourite essential oil such as lavender. This can easily be spritzed around your space.

However, you should make sure not to use old cleaning product bottles, as vinegar can create a dangerous reaction.