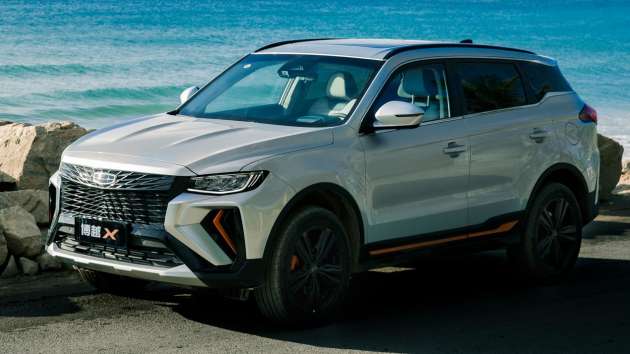 The Geely Boyue X has just gone on sale in China. Four variants of the SUV are available, with prices starting from 112,800 yuan (RM73k) for the entry-level variant to 142,800 yuan (RM93k) for the range topper.

During the unveiling, it was revealed that the Boyue X can also be had with a smaller 1.5 litre three-potter, delivering 174 PS and 255 Nm of torque. This powertrain will be mated with a six-speed automatic instead, although prices for these variants have yet to be disclosed. Geely claims to have given the SUV a more comfortable “European chassis tuning,” and conducted validation tests covering over 60,000 km.

To entice customers, Geely is offering an upfront cash rebate of 4,000 yuan (RM2,600), 0% interest rate instalment for 36 months (up to 10,000 yuan or RM6,500 in savings!), a trade-in rebate of 5,000 yuan (RM3,238), and eight complimentary basic maintenance service (labour inclusive). It will also give customers free five-years unlimited data, dashcam recorder and car mats.

Now, in case you missed the news, the Boyue X is basically a Boyue Pro with an extensive facial makeover. The new fascia is inspired by the Vision Starburst concept, likely a bold attempt to appeal to a younger audience. It features a brand new grille and bumper design, a more pronounced skid plate, blacked out 19-inch twin-five spoke wheels with orange brake calipers, black roof rails, and orange exterior accents.

The inside is pretty much the same as the Boyue Pro, save for the fancier leather seat upholstery with perforation. The huge 12.3-inch infotainment system is powered by a new ECARX E02 system-on-chip (SoC; even newer than Boyue Pro’s E01 chip), said to offer much improved performance and functionality than before. It runs on Geely’s Galaxy OS, capable of supporting a myriad of apps including WeChat.

Higher-end variants will get a 12-speaker Bose sound system with microphone support for karaoke, 72-colour ambient lighting system, and a smartphone-based digital key which can automatically unlock the doors when approaching the vehicle.

The unveiling of the Boyue X puts the Proton X70 two steps behind its donor model, though Geely did say the Boyue Pro is meant to be a more upscale version of the SUV. So, what do you think of the Boyue X?