Batteries for electric vehicles have certainly gotten cheaper over the last decade, but according to a new report published by the US Department of Energy (DOE), prices have gone down considerably. The DOE estimates that in 2022 the price of lithium-ion batteries for EVs were around 89 percent lower compared to 2008.

This is still an estimate, though, and it only results in that percentage if you use constant dollars, which is done by adjusting their value for inflation and current purchasing power. The DOE presented a graph (embedded below) showing this price decline, which shows that the price of 1 kWh (of usable capacity) was $1,355 in 2008 and has fallen to just $153 in 2022. 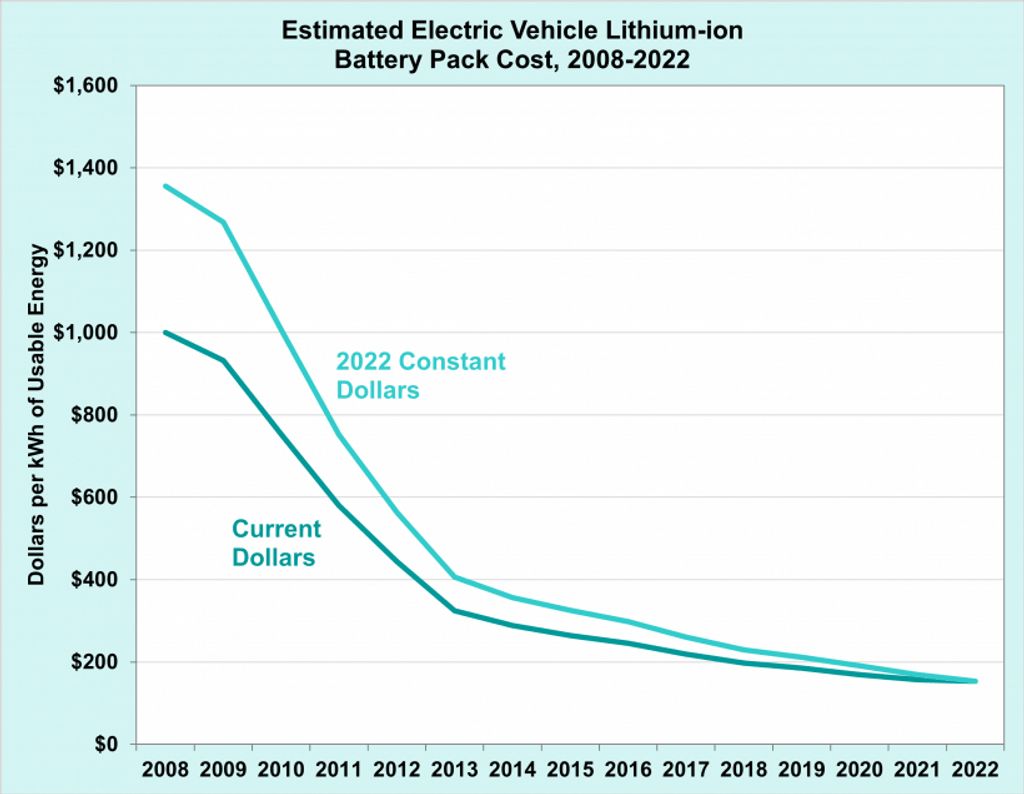 If we don’t adjust the currency, then the price of 1 kWh was about $1,000 in 2008, so the percentage by which it has fallen until today is reduced, yet the graph still shows a substantial drop in price. However, this doesn’t paint as accurate a picture as using real (adjusted) dollars, which is why they are almost always used in studies such as this one.

Interestingly, we found another recent report, this time published by BloombergNEF, which said that the price per kilowatt hour had actually gone up in 2022 for the first time since it began tracking this market in 2010. Apparently, in 2021 the cost for 1 kWh was 7 percent lower than today, at about $138, and it could have risen further in 2022 had it not been for the widespread introduction of LFP (lithium iron phosphate) technology.

The report says LFP cells were around 20 percent more affordable than NMC (lithium nickel manganese cobalt oxide ) batteries through the use of less cobalt and more nickel in cathodes. Even LFP batteries saw a price increase in 2022, rising by 27 percent compared to 2021. This was explained by Evelina Stoikou, an energy market expert and author of the study, who said that

Raw material and component price increases have been the biggest contributors to the higher cell prices observed in 2022. Amidst these price increases for battery metals, large battery manufacturers and automakers have turned to more aggressive strategies to hedge against volatility, including direct investments in mining and refining projects.

The same report also mentions the fact that the cheapest lithium-ion cells in the world are in China, where the average cost for 1 kWh is $127, which is 24 and 33 percent less than in the United States and Europe respectively. This is helped by the much larger production volumes for EVs and their battery packs in the People’s Republic, as well as by the fact that China has massive reserves of lithium.