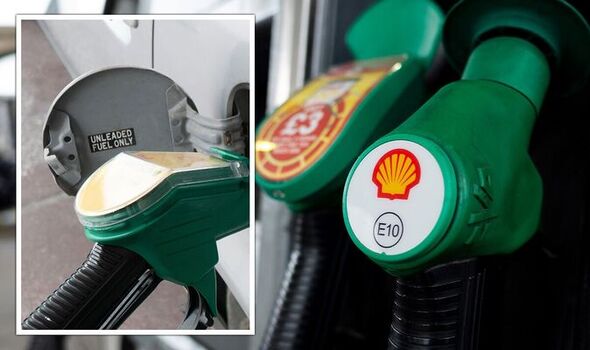 The new environmentally friendly petrol was launched onto forecourts in Northern Ireland last month. The rollout of E10 fuel was praised by many within the fuel industry as a way to help internal combustion engine-powered cars reduce their emissions while keeping them on the road.

The rollout of E10, which is petrol blended with up to 10 percent renewable ethanol, will help Northern Ireland to decarbonise transport, as it is greener than existing petrol.

Its use across the UK could contribute to cutting transport CO2 emissions in the UK by potentially 750,000 tonnes a year – equivalent to a forest the size of the Isle of Wight capturing carbon every year.

The move to E10 is fully supported by the downstream oil sector as a practical measure to further reduce carbon emissions.

She added: “UKPIA is clear that transport will need low carbon fuels if the UK is to meet its Net Zero target by 2050 and the change is an important step in the UK’s broader energy transition journey.

“Petrol and diesel engines will continue to be a large part of the vehicle fleet, as will hybrids, beyond the 2030 phase out of new combustion engine vehicle sales which are not zero emission at the tailpipe.

“E10 can reduce emissions of such vehicles and deliver greenhouse gas savings early.

“This move will also support the development of low-carbon fuels that will be required over the longer term for aviation and heavy goods vehicles.​”

She said: “Most petrol cars on the road are optimised to run on E10, and it’s very welcome that motorists in Northern Ireland will soon benefit from having access to this greener fuel”.

The news comes just after the RAC urged drivers to avoid certain petrol stations as drivers keep being cheated.

Despite the average price of petrol and diesel falling by 6p a litre in November, data from RAC Fuel Watch shows that the reductions on the country’s forecourts should have been at least twice that.

The reason the RAC believes drivers have lost out is due to the wholesale price of petrol plummeting by 11p in November from 122.63p to 111.53p on top of significant reductions in late October.

Taking an average of wholesale prices for the last week of November (21-25), the RAC believes petrol should really be at an average of 146p and diesel to 169p – 14p and 15p lower than the current averages.

Consequently, the RAC believes retailers are now collectively enjoying margins of more than 20p a litre – a figure that drivers will find truly shocking as they struggle to put fuel in their cars to go about their daily lives.

A litre of unleaded bought at a supermarket costs 158.31p – down 6p in the month – but now only 1.6p lower than the UK average.

Supermarket diesel at the end of November was down 3.7p to 182.74p, only a penny below the average price across the country.

Long-term RAC data shows that both fuels are normally 3.5p cheaper when bought at a supermarket.

RAC fuel spokesman Simon Williams said: “It’s bordering on a scandal that drivers are being overcharged so much because the big four supermarkets, which dominate UK fuel retailing, are flatly refusing to reduce their prices by bigger amounts.”