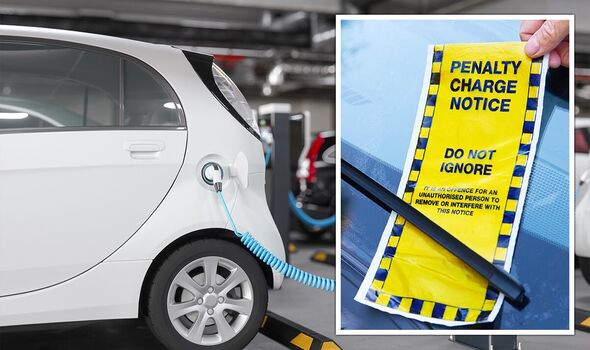 One motorist said the “infrastructure is not ready for mass” electric car adoption, while others warned they would not wait over an hour to top up a car. It comes after motorists have reported being hit with £120 fines by private parking firms after overstaying their maximum allowance.

One driver reported an £80 fine for charging a car in a hotel car park for 45 minutes.

Another motorist said they were fined after stopping in a McDonald’s car park for 100 minutes to charge even though the maximum allowance was 90 minutes.

However, drivers have complained this maximum parking time is often not enough to fully charge their vehicle.

Jack Cousens, head of roads policy at the AA, previously claimed that the charges were “unfair”.

He warned many EV owners were being “penalised for errors outside of their control”.

Express.co.uk reader ‘pawprint’ said: “Another reason NOT to buy an EV. You have to pay fines to use the chargers, which are few and far between anyway.

“NO thanks, I’ll stick with Petrol/Diesel no matter how artificially high they push the price.”

‘Welsh Rarebit’ added: “Said all along the infrastructure is not ready for mass electric cars!

“I would not go to a petrol garage and wait 90 minutes to fill my car up!”

Danny Watson added: “It was obvious the EV car owners would get hammered sooner or later. Glad I kept my petrol cars.”

Reader ‘landshark’ added: “I predicted this and the EV lovers wouldn’t have it. Which makes it all the more funny.

“Also owners of older EVs are now finding out it costs more to replace the batteries than the car is worth.”

However, some readers supported the private firms decision to penalise drivers for overstaying.

Reader ‘Lord Lucan’ said: “The fines are totally justified. The guy who used the hotel car parking charger was almost certainly not staying at the hotel and that charger was most likely installed specifically for the convenience of the hotel guests ONLY.”

‘Bertie3 ‘added: “Since when did charging your EV make you exempt from parking time restrictions.

“Why would you even think it would, because you’re something special as an EV driver?”

‘MyFellowGeraniums’ added: “You gotta be a bit of a numpty to buy an EV expecting to charge it anywhere you want including private land for free. No sympathy.”

Most recently an EV driver was fined £300 for getting stuck in a charging queue for three hours.

The driver complained that there were only two chargers available at the motorway service as he was forced to wait for three hours.

He said: “My family (inc. child+cat) were stuck in our car for nearly three hours at an M4 Welcome Break (with only two charge stations…) and have received a £100 parking charge.”

Express.co.uk reached out to Welcome Break for comment at the time without any response.