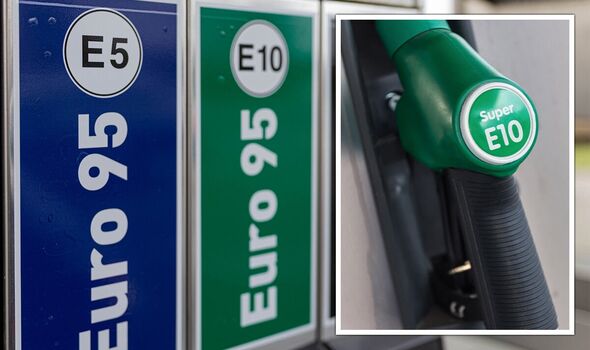 One driver said they are now filling up “once a week” instead of every “fortnight” since the new petrol was launched. Other drivers have also “noticed a drop in power” under the new fuel changes which came into effect in 2021.

Express reader 60 something said: “MPG is a joke since changing to the new fuel, so I can’t see any advantage in it.

“It is more expensive because you have to fill up more frequently and doesn’t take you as far, so why use it?

“I used to have to fill up once a fortnight. Now it is once a week.”

Kat200 added: “Definitely using more fuel, I noticed a drop of around five mpg on a recent motorway run.

“I suspect the drop will be much greater around town.

“This drop was on a three-cylinder super-efficient modern engine that develops 130bhp from 1.2 litres, so heaven knows what the impact is in bigger conventional engines.”

Reader Pikestaff added: “My car is a 17 plate 1400 petrol and the first time I used E10 I noticed a drop in power and MPG.

“I will continue to use what is now termed super unleaded.”

Reader Digital said: “Arguments about the environment, cost, and economy aside it comes down to this.

“As a mechanic, if someone said here is a gallon of petrol with five percent ethanol in it or this one with 10 percent in it which one do you want to run in your engine?

“I’d pick the E5 every time as it’s obvious it would be better for combustion.

“If the E10 makes it less efficient then being cheaper would be a false economy would it not?”

The US Energy Information Administration (EIA) also warned the energy content of ethanol is around 33 percent less than pure unleaded.

RAC spokesman Simon Williams has also previously warned divers would be getting “fewer miles to the gallon”.

He said: “Those with E10 compatible cars will, unfortunately, find they are getting fewer miles to the gallon as the fuel is less efficient than E5 fuel, due to it containing five percent more ethanol.”

However, some Express readers failed to see the issue surrounding the new E10 switch.

Reader summer.bay said: “Using e10 petrol l did a 135 mile round trip and my fuel usage was the same as before the change.”

Meanwhile, Taxed to Death added: “In which case, just use the E5 petrol that is still available.”