How SEATturned to big names to create its Ibiza supermini 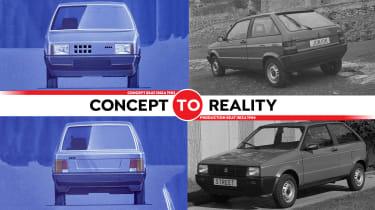 If you were to build a car from scratch, where would you start? You’d hire a designer, perhaps an industrial strategist or a marketing team. But actually assembling the building blocks to make a vehicle is not the work of a minute.

That’s the task that faced SEAT almost 40 years ago, though, as the firm emerged from an increasingly fractious partnership with Fiat in the early eighties. SEAT badly needed to make its own standalone model that could bring affordable motoring to Spain’s masses, while also demonstrating that the company could stand on its own two feet. And so the first SEAT Ibiza was born, with help from some of the car industry’s biggest players.

SEAT had made a car ‘of its own’ before the Ibiza, but while the courts judged that the Ronda family hatchback was more than just a rebadged Fiat Strada/Ritmo, the public wasn’t fooled. So in 1982 the company started work on a smaller model, hoping to use the new-found resources of the Technical Centre in Martorell to help develop it.

The first obstacle was design, because SEAT didn’t have much capacity in that area and wanted a model whose appeal could extend across Europe. It turned to one of the masters, Giorgetto Giugiaro, whose Italdesign consultancy had a strong record on envisioning small, simple cars that were easy to industrialise. These sketches, rarely seen outside of SEAT’s archive in Barcelona, show the initial vision for the car, and while the rumours that they were a rejected proposal for the Mk2 Volkswagen Golf have never been substantiated, you can see how they could be true.

There’s a large glass area and a pretty low shoulder line on the sketches, but the side profile, with its straight-edged lines, is unmistakably that of the production Ibiza. The front and rear treatments differ; one features what looks like a body-coloured grille and the other a more conventional ventilation set-up. 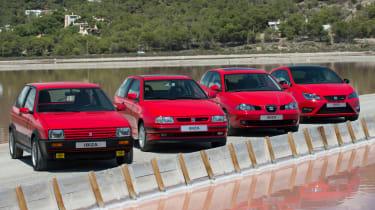 The car had a long wheelbase for its size (another hint at a potential Golf connection). This meant that, in theory, the Ibiza could be built on the slightly longer underpinnings that had worked for the Ronda, delivering cost savings and making it relatively spacious inside for a supermini.

SEAT still had to work out how to industrialise the design, and it turned to another proven quantity: Karmann. The German coachbuilder had good experience building vehicles for the likes of Volkswagen and BMW, and it quickly worked out how Italdesign’s creation could be manufactured in SEAT’s Zona Franca facility near Barcelona, using a mix of new components and some carried over from the Ronda.

The choice of powertrain proved another challenge, because SEAT wanted to move on from the Fiat-inherited motors fitted elsewhere in its range. In the end, it took existing Fiat units and handed them to Porsche, whose engineers were already looking after the Ibiza’s gearbox. With reworked cylinder heads, the resulting motors had anywhere between 62bhp and 84bhp and, after a licence fee of around seven German marks per car was agreed, ‘System Porsche’ was emblazoned on the top – a neat marketing trick.

While there were internal concepts based on the designs you see here, there was no formal motor show preview. Instead, SEAT revealed the Ibiza on the island that gave it its name, in spring of 1984, and manufacturing was well under way by the time the international audience got to look at it, at the Paris show in the autumn of the same year.

In production form, there were clear Giugiaro touches. The car’s multi-spoke alloys would become a SEAT staple, even being used on the original Leon in 1998. Inside, there was a nod to the Italian’s Fiat Uno with curious steering column-mounted panels for the indicator stalks. But the relatively long wheelbase remained, positioning the Ibiza somewhere between a supermini and a family car.

The Ibiza wasn’t an instant success but over time it gained enough traction to sell well over 1.4 million units. It lived on for many years after the Mk2 arrived, because SEAT sold the production line for the car to fledgling Chinese brand Nanjing, which made it in modified form until 2008.

More than six million Ibizas have now been sold and these days, SEAT makes cars for not only itself but also VW and Audi. Its Martorell plant is among the most productive in Europe. And its engineers play a key role in the development of projects used by multiple VW Group brands. But the journey to this point really started with the original Ibiza, and with the calls for outside help that made it possible.

What do you think of the SEAT Ibiza concept? Let us know in the comments below…