The reimagined Porsche 914 features a host of chassis upgrades and the same 3.4-litre flat-six engine as the Mk2 Cayman 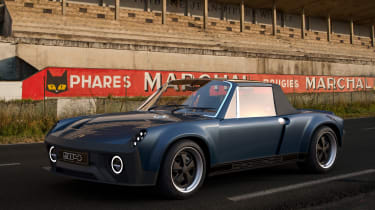 Fifteen Eleven Design, the classic arm of the World Rally Championship racing team Mellors Elliot Motorsport, will soon launch a modern interpretation of the Porsche 914. The first production models aren’t expected to be finished until June, but UK buyers can place their orders now, with prices starting from around £230,000.

Unlike the original Porsche 914, which was powered by a Volkswagen-derived 1.8-litre flat four engine, this resurrected variant will feature the same 3.4-litre flat-six engine and six-speed manual gearbox as the first generation Cayman S.

Performance figures are yet to be confirmed, as the firm’s engineers are only just signing off the car’s chassis setup. But, even if Fifteen Eleven Design makes no upgrades to the powertrain, its reimagined 914 will have more than three times the power of the original car. The standard 987 Cayman S had an output of 291bhp and 340Nm of torque.

This revived 914 will be much more than a rocket strapped to a roller skate, though. Fifteen Eleven plans to fit larger vented discs, four-piston Brembo calipers and some chassis reinforcement plates to help contain the extra power. The firm also borrowed the Cayman’s suspension architecture, improving it with some new manually adjustable coilovers.

Fifteen Eleven will also make merry with the carbon fibre, fitting some flared arches and a new front bumper and bonnet – although the latter two mods will be necessary to make space for a larger radiator and oil cooler. There’ll even be an active rear spoiler mounted on the bootlid, which will automatically deploy at speed. 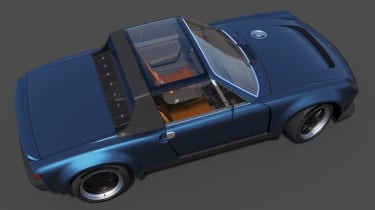 The old car’s iconic pop-up headlamps will be removed – and in their place will be a fresh set of low-mounted projector LED units. However, Porsche’s original targa roof design isn’t going anywhere; Fifteen Eleven will remanufacture the panel in glass, which the firm says will “give a sense of open-top driving all year round.”

Inside, the revived 914 will get a pair of leather-trimmed Recaro seats and a new floor-mounted AP pedal box with a fly-by-wire throttle in place of the original car’s cable operated system. The firm’s engineers have also reshaped the car’s firewall and moved its petrol tank, in effort to create some extra legroom.

What do you make of Fifteen Eleven Design’s reimagined Porsche 914? Let us know in the comments section below…

buy hydrochlorothiazide canadian pharmacy no prescription
Best News
2021 Skoda Octavia vRS iV | UK Review
01/24/2021
FBI: No crime committed as ‘noose’ rope was there in 2019
06/23/2020
Why VW Pulled The Plug On A 400bhp VR6 Arteon R
06/23/2020
2021 Kia Grand Carnival breaks cover – solid looker! – paultan.org
06/24/2020
New Volkswagen Arteon Shooting Brake arrives as part of facelifted line-up
06/24/2020
Recent Posts
This website uses cookies to improve your user experience and to provide you with advertisements that are relevant to your interests. By continuing to browse the site you are agreeing to our use of cookies.Ok