China remains the largest and one of the fastest growing plug-in electric car markets in the world with another strong month in October.

According to EV Volumes’ data, shared by Jose Pontes, some 578,000 new passenger plug-in electric cars were registered in China in October, which is 75% more than a year ago and about 31% of the total volume.

All-electric cars are much more popular than plug-in hybrids in China, although PHEVs consequently are growing at a faster rate year-over-year. Last month PHEVs went up 143% to about 168,000. Meanwhile, BEVs grew by 57% year-over-year, which is a healthy rate.

Results for the month: 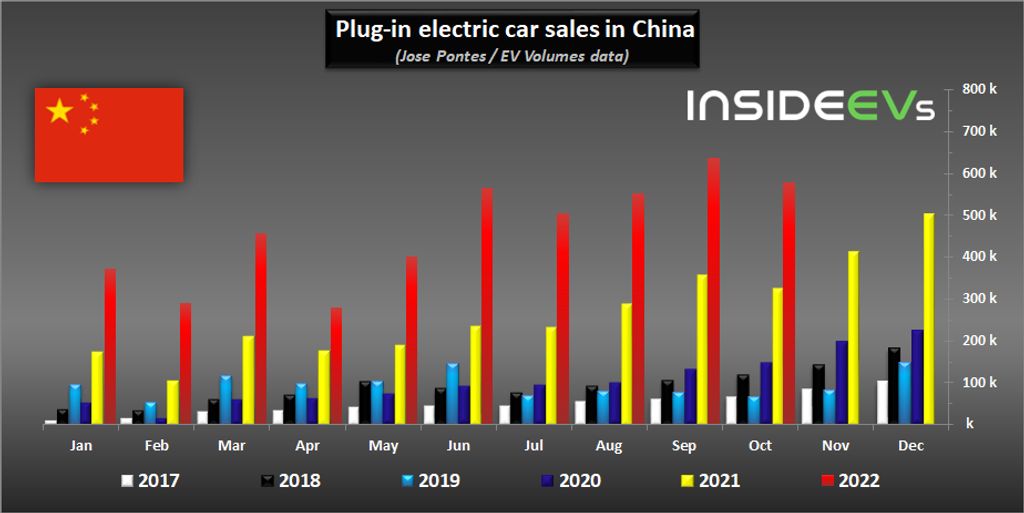 So far this year, over 4.6 million new passenger plug-in electric cars were registered in China – that’s more than in the entire year of 2021.

According to the China Passenger Car Association (CPCA)’s updated forecast, some 6 million passenger plug-in electric cars might be sold in China in 2022.

In October, BYD completely dominated the Chinese market, putting multiple models in the top 10 plug-in list. That’s not a surprise considering well over 200,000 sales. The top BYD models were Song Plus, Qin Plus, Han and Yuan Plus – all offered in both BEV and PHEV versions.

Only the tiny Wuling Hong Guang MINI EV managed to prevent BYD from capturing the entire podium for itself. The Tesla Model Y was in the off-peak mode (export-focused month), barely securing a spot in the top 10.

* BEV and PHEV versions of the same models were counted together in the source.

The BYD Qin family strengthened in third position. With two months to go, it might be enough to stay ahead of the Tesla Model Y. A lot will depend on the final month of the year, when Tesla probably will deliver a very high number of Model Y.

After 10 months of the year, BYD basically captured nearly a third of the entire Chinese plug-in car segment and, with a high rate of growth, it might become the top OEM in the country.

Other brands and manufacturers (automotive group) appear to be losing ground, which is indicated by a shrinking market share.

Top brands by share in the plug-in segment year-to-date:

Top automotive groups by share in the plug-in segment year-to-date: