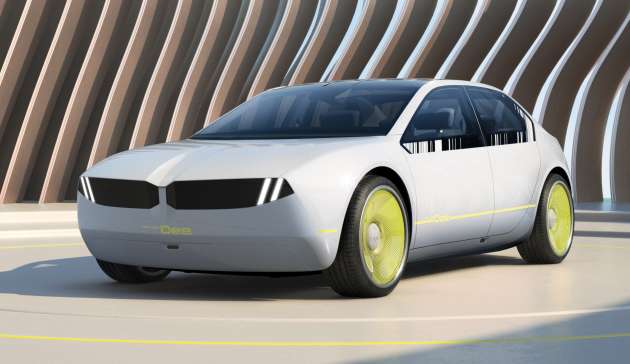 Prior to the start of this year’s Consumer Electronics Show (CES), BMW’s Instagram account was “taken over” by someone/something called Dee, which left many curious as to what was going on. Well, the German carmaker has now revealed that Dee stands for ‘Digital Emotional Experience’ and it is the name of its brand new i Vision concept.

The all-electric BMW i Vision Dee is meant to preview some of the technologies that could make its way into the company’s next generation of electric vehicles (EVs) – the Neue Klasse – from 2025. The main focus is on creating a unique digital experience both inside and outside the vehicle, the company noted.

“With the BMW i Vision Dee, we are showcasing what is possible when hardware and software merge. In this way, we are able to exploit the full potential of digitalisation to transform the car into an intelligent companion. That is the future for automotive manufacturers – and, also, for BMW: the fusion of the virtual experience with genuine driving pleasure,” said Oliver Zipse, chairman of the board of management of BMW Group.

“At the same time, BMW i Vision Dee is another step on the road to the Neue Klasse. With this vision, we are looking far into the future and underlining the tremendous importance of digitalisation for our upcoming product generations,” he added.

One of the technologies showcased by Dee is the BMW Mixed Reality Slider, which works in combination with an advanced head-up display. This is the central operating control of the Dee and features a touch panel on the dashboard where drivers can select how much digital content they want to see ahead of them.

The five available modes range from analogue to driving-related information, to the contents of the communications system, to augmented reality (AR) projection, right up to entry into virtual worlds via virtual reality (VR). On the last option, the company says there are dimmable windows to gradually fade out reality to create a new dimension of driving experience for the user.

The VR mode is an evolution of a system that BMW showcased with the M2 previously, although there’s no need to put on a virtual reality (VR) headset in the Dee. Toying with realities is something BMW has done before, as 2011’s Mission: Impossible – Ghost Protocol featured the Vision EfficientDynamics with interactive AR technology.

While the VR mode is still a long way from making its way into the hands of consumers, BMW has confirmed that the Neue Klasse vehicles will have a variation of the Dee’s head-up display that projects information across the entire width of the windscreen when activated.

Elsewhere in the interior, you’ll notice that it is missing the brand’s signature iDrive system and a lot of physical controls. This is because most of the vehicle functions are accessed via the touchpads on the steering wheel or by engaging the digital voice assistant, the latter of which uses natural language that is intuitive and can be a little sassy. If you wanted your car to have its own personality like KITT or Herbie, the Dee is BMW’s offering.

The minimalistic approach to the interior extends to the exterior too, which has a retro look to it and retains hallmark cues like the Hofmeister kink on a three-box design. The large kidney grille and headlamps also sport what BMW calls a phygital (fusion of physical and digital) icon on a uniform surface, allowing the vehicle to product differential facial expressions.

This is just one part of the digital experience, as the Dee can also project an image of the driver’s avatar onto the side window to further personalise the welcome scenario. If that isn’t enough, BMW also enhanced E Ink technology it first showed on the iX Flow at last year’s CES, so it can now display up to 32 colours on the Dee.

The body surface is divided into 240 E Ink segments that can be controlled individually, allowing the car to display an almost infinite variety of patterns within seconds for even more customisation and expressiveness.

With the first Neue Klasses EVs due by 2025, the Dee could be our first look at a next-generation 3 Series, which is one of two midsize models that will inaugurate the Neue Klasse – the other is said to be an X3-sized SUV. The company isn’t confirming anything for now and has merely said it will “provide further insights and glimpses of the revolutionary vehicle concept of the Neue Klasse over the course of 2023.”