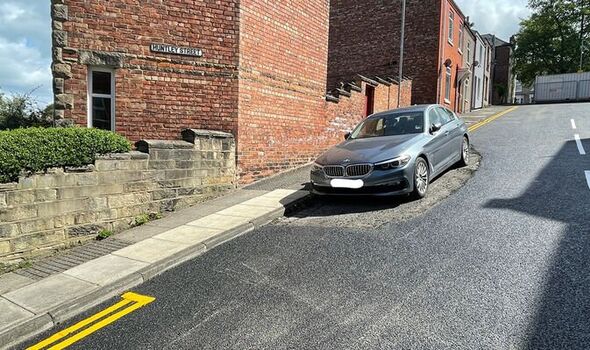 Signs were advertised along Huntley Street, Darlington informing residents that the road would be closed on May 9th and 10th. As an additional reminder, traffic cones were placed along the length of the road.

But one driver did not pay any attention to the signals and left his grey BMW parked on the street.

Resurfacing went ahead as planned, with workers tarmacking around the vehicle – leaving a patch underneath which they could not reach, reports Teesside Live.

The parked car was also noticed by social media users in Darlington who shared pictures of it on Facebook.

“Oops. Someone didn’t read the road signs,” said one person.

Others speculated on the reasons why it was not moved, with some believing the owner was on holiday or in hospital.

“The thing that’s getting me is they would have had to move the cones to park the car. The signs were there a few days before the work was carried out,” said one.

“There’s always one,” wrote another, “Should have Tarmacked over it,” said another, as others called for it to be towed and the costs charged to the owner.

Huntley Street is a residential street close to Darlington train station in the town centre and social media users were also quick to point out it is free to park there.

A spokeswoman for Darlington Council said: “As the vehicle in question has been left in an area without parking restrictions, we’re not able to take action against the driver on this occasion.

“Attempts have been made to contact the owner to ask them to remove it but so far without success.

“This does mean that the road resurfacing has been carried out around the vehicle, leaving a patch behind – this will be dealt with at a later date when the car is finally removed, but it will mean an extra cost to the council and the patch will be visible.

“Signage advising of planned maintenance works is put up in good time with the aim of avoiding situations like this.”