Bentley has finally halted production of its aging flag-bearer, with a final special edition model that celebrates the saloon’s history 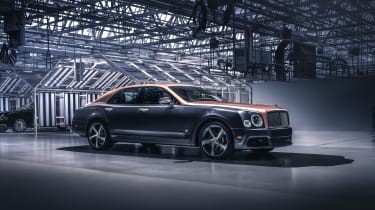 Bentley has officially ended production of its Mulsanne luxury saloon, following a temporary extension of the car’s lifespan due to the coronavirus pandemic. To mark the occasion, the British brand has built a final 30 special edition examples, with each bearing a range of unique cosmetic upgrades and commemorative details.

The Mulsanne has been the Bentley flag-bearer for the last decade – and will now hand its crown to the new Flying Spur. The company recently pieced together a short film which detailed the highlights from the car’s reign, starting with its launch at the 2009 Pebble Beach Concours d’Elegance and concluding with the new, limited-run special edition model.

Under the bonnet, Bentley has swapped the standard car’s silver intake manifold for a black alternative – and the engine number plaque (which is usually signed by the engineer who built the unit) will be signed by Bentley Chairman and Chief Executive, Adrian Hallmark.

As suggested by its name, the Mulsanne 6.75 Edition also celebrates the 60th anniversary of Bentley’s famed 6.75-litre V8. So, it’s powered by the same twin-turbocharged version of the engine found in the Mulsanne Speed, which has an output of 530bhp and 1100Nm of torque – which offers a 0–62mph time of just 4.9 seconds and a top speed of 190mph. 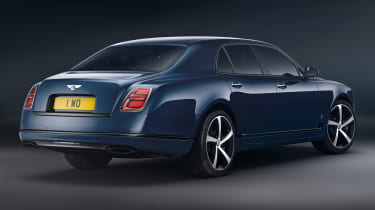 Inside, each model gets a commemorative plaque for the centre console, which marks the model’s place in the build series. The dial faces feature cutaway drawings of the famed V8 powertrain, while the ventilation control knobs have been swapped for miniaturised versions of the engine’s oil filler cap. Buyers also get reupholstered seats, each bearing the unique 6.75 Edition badge.

The Bentley Mulsanne: a history

The Mulsanne can trace its lineage back to the 1930 Bentley 8-Litre, which was the final car in the company’s history that was penned by the firm’s founder – W.O. Bentley. It was the last completely new model built by the brand before its financial collapse and subsequent sale to Rolls-Royce in 1931.

In 1980, Bentley launched the first Mulsanne. It was powered by the company’s famous 6.75-litre V8 engine and it laid the groundwork for its modern sibling’s handling characteristics and styling, being brash, brutish and powerful, yet comfortable and easy to drive over long distances.

Bentley launched the refreshed Mulsanne in 2009 and, over the last 11 years, the firm’s 700 employees have spent almost three million hours on the car’s production line – roughly one million of which were spent finishing the car’s leather upholstery and almost 90,000 of which spent polishing the car’s paintwork and chrome.

Like it’s predecessor, the second-generation Mulsanne was powered by a 6.75-litre V8 engine which, at the start of the saloon’s production run, generated 505bhp and upwards of 1,000Nm of torque.

The Mulliner Driving Specification package was introduced in 2012, along with a handful of cosmetic upgrades, diamond quilted upholstery, a glass sunroof and an electrically operated bottle cooler. The line-up expanded again in 2015 to include the Mulsanne Speed, which upped the engine’s output to 530bhp and added a configurable suspension system.

Are you sad to see the end of the Bentley Mulsanne’s production run? Let us know in the comments section below…