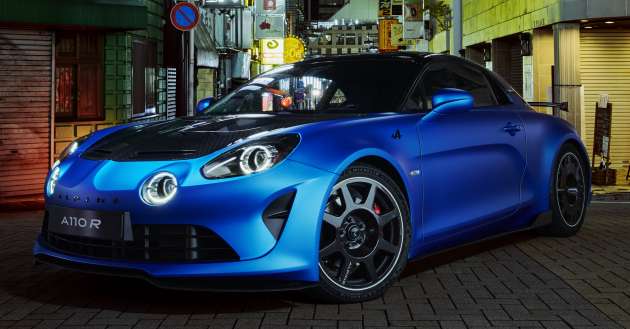 Alpine has unveiled its latest creation, the A110 R that arrives with less weight and added motorsport focus for its mid-engined sports car. The carmaker claims a weight reduction of up to 34 kg for the A110 R to tip the scales at just 1,082 kg, along with a reworked body to balance improved downforce with reduced drag.

This is the latest in a line of the marque’s mid-engined models that began with the A110 that made its debut in 2017, later joined by the A110 S with a more powerful 292 PS version of its 1.8 litre turbocharged inline-four engine. The sports car range was updated for the 2022 model year in late 2021, where the A110 S and GT variants got uprated again to 300 PS.

The A110 R gets revised exterior body parts including a new bonnet, side skirts, rear window and diffuser, along with a rear swan-neck spoiler, flat underbody as well as carbon-fibre wheels for improved stability around corners and at high speeds, says Alpine.

The revised exterior parts for the A110 R give the track-focused Alpine even more rear downforce than the A110 S with aero kit, where the A110 R brings an additional 29 kg of downforce at its top speed that is now higher at 285 km/h. Meanwhile, drag has also been reduced by 5% at its track setting.

Powertrain continues to be the 1.8 litre turbocharged inline-four petrol engine that produces 300 PS at 6,300 rpm an 340 Nm of torque from 2,400 rpm, sent to the rear wheels through a seven-speed wet dual-clutch automatic gearbox; 0-100 km/h is achieved in 3.9 seconds.

Default setup for the A110 R is 10 mm lower compared to the A110 S, and the R can be further lowered another 10 mm beyond that. Anti-roll bars are now 10% stiffer in front and 25% stiffer at the rear, and the springs are 10% stiffer front and rear. Meanwhile, the A110 R dampers are adjustable for compression and rebound over 20 clicks of adjustment.

Rolling stock is a set of Michelin Pilot Sport Cup 2 tyres measuring 215/40R18 in front and 245/40R18 at the rear, while braking is by 320 mm composite Brembo disc brakes. Additional brake cooling scoops on both front suspension upper arms as well as ducts on the bodywork contribute to a 20% improvement in brake cooling, according to Alpine.

Three driving modes are offered on the A110 R – Normal, Sport and Track, the latter offering a track-specfic stability control setting. There is also a mode to completely switch off the ESC.

The Alpine A110 R also gets a double-walled exhaust system that omits the exhaust valve for the car to produce “a far more harmonious sound”, which is amplified by replacing the interior glass partition with a cut-aluminium partition, removed engine bay soundproofing, and the retaining of the engine air intake resonator.

Inside, the A110 R is installed with Sabelt Track carbon-fibre bucket seats fitted with six-point harnesses, and the seats also comes with a seat belt reminder. Upholstery is entirely by microfibre fabric, with grey contrast stitching with the doors get red fabric pull straps instead of conventional doors handles.

The infotainment screen for the A110 R additionally features Alpine Telemetrics, which uses pressure gauges and histograms for parameters such as turbo pressure, gearbox temperature, torque and power outputs, steering wheel angle as well as an accelerometer. An included chronograph can record timed track drive sessions.

Finally, the Alpine A110 R is made in Dieppe, France, and is shown here in Racing Matte Blue that also clothes the marque’s Alpine A522 Formula 1 car.