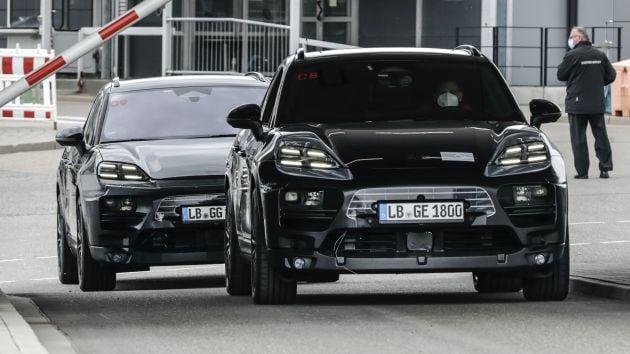 Porsche has revealed preliminary technical details of the second-generation Macan, which will available in fully electric form and expected to begin production next year. The upcoming Macan is an important step in the carmaker’s plans to have electric vehicles account for 50% of its global sales in 2025, and 80% by 2030, according to reports by Autocar and Car and Driver.

Unlike the Taycan – the brand’s first series production EV – that is built on the J1 platform, the new Macan will be underpinned by the Volkswagen Group’s Premium Platform Electric (PPE) co-developed with Audi (the four-ring brand will use it for its A6 e-tron).

Also operating on an 800-volt architecture, all variants will get a lithium-ion battery with an energy capacity of 100 kWh, although Porsche has not provided an expected range figure for now. The battery consists of 12 modules with prismatic cells and can support DC fast charging beyond the Taycan’s 270 kW – the target is to get from a 5-80% state of charge in under 25 minutes.

Porsche notes that the battery can adapt to to 400-volt chargers like home wallboxes by effectively splitting the battery into two halves in order to boost charging speeds. The DC fast charging components, along with the onboard AC charger, high-voltage heater and DC/DC converter are packaged into what the company calls the Integrated Power Box to save space. The PPE platform can accommodate rear- and all-wheel drive setups, with Porsche quoting maximum system outputs of 612 PS (603 hp or 450 kW) and 1,000 Nm of torque. The electric motors feature a “double V” magnet arrangement, while the semiconductor material used for the pulse inverters will be silicon-carbide to optimise efficiency and reduce losses. It’s also said the Macan will feature a one-speed gearbox instead of the two-speed unit in the Taycan.

Porsche says the Macan EV will be “sportiest model in its segment” thanks to a “performance rear axle” that places the rear electric motor as far back as possible, shifting the weight balance to a 48:52 split. Meanwhile, certain variants will come with a fully-variable electronically-controlled rear differential, and rear-wheel steering makes its way into the Macan for the first time with a maximum angle of five degrees.

To keep the body in check, the Porsche Active Suspension Management (PASM) system handles the air or steel suspension setups, with the Macan set to be the first to get two-valve dampers that can adjust independently. Wheel sizes up to 22 inches in diameter will also be made available, and staggered tyres widths are standard to better deal with the rearward weight bias.