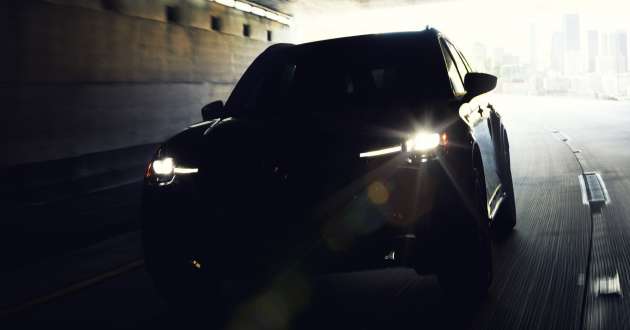 Mazda has released yet another teaser for the upcoming CX-90, its new three-row SUV that will join the Large Product group that includes the CX-60, CX-70 and CX-80. We also finally get an official reveal date: January 31, 2023.

When it was first teased in November last year, we were told the CX-90 will be powered by an inline-six engine, although details were lacking at the time. Now, Mazda has said the SUV in the United States will be offered with a 3.3 litre turbocharged six-cylinder petrol engine with a 48-volt mild hybrid system that generates 345 PS (340 hp or 254 kW) and 500 Nm of torque.

The e-Skyactiv G mill can already be found in the CX-60, delivering 284 PS (280 hp or 209 kW) and 450 Nm following Australian specifications. The difference in output figures is likely due to the fact that the CX-90 will be the brand’s largest model, eventually replacing the CX-9 in selected market, so the extra grunt will be useful to deal with the increased heft.

The Japanese carmaker also confirmed last month that the CX-90 will be offered with a plug-in hybrid powertrain. Though not stated, it is expected to be the same setup used in the CX-60, delivering a total system output of 327 PS (323 hp or 241 kW) and 500 Nm of torque.

For a brief recap, the CX-60’s PHEV powertrain is made up of a Skyactiv-G 2.5 litre naturally-aspirated four-cylinder petrol engine, an electric motor, a 17.8-kWh lithium-ion battery, an eight-speed automatic transmission and i-Activ all-wheel drive system.

Mazda also mentioned in its latest release that Kinematic Posture Control (KPC), first introduced on the MX-5, will be standard on all variants of the CX-90 sold in the US. The accompanying shadowy image of the model suggests it will be styled close to the CX-60, with subtly flared arches and a front lighting signature that features light bars pointing towards the main grille. We’ll only get to see the SUV in full at the end of this month.