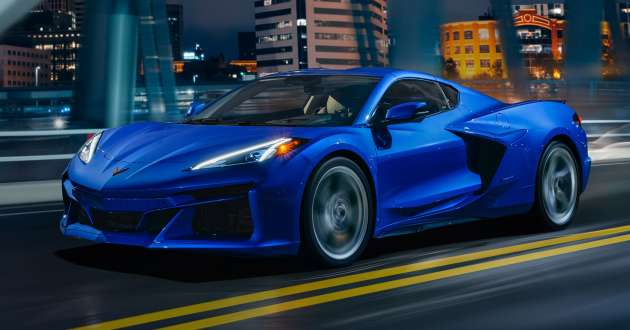 The Chevrolet Corvette underwent a radical transformation when it switched to a mid-engine layout in 2019. Since then, the model has made its way to right-hand drive markets and the American carmaker even introduced a high-performance Z06 model in 2021.

In 2023, the Corvette is celebrating its 70th anniversary, and to celebrate the milestone, Chevrolet has unveiled an electrified variant called the E-Ray. This is a revolution for the Corvette, which has never been offered with any form of electrification in the past. If that wasn’t enough, the E-Ray is also the first Corvette to get all-wheel drive, and here’s how the whole system works.

At the heart of the car is the same LT2 6.2 litre naturally-aspirated V8 from the Stingray, which features direct fuel injection, cylinder deactivation and dry sump lubrication. On its own, the mill delivers 495 hp at 6,450 rpm and 637 Nm of torque at 5,150 rpm, with drive sent to the rear wheels via an eight-speed dual-clutch transmission.

The electrification aspect of the powertrain comes in the form of a front-mounted electric motor that is rated at 160 hp and 165 Nm. This, along with a 1.9-kWh lithium-ion battery, completes the electric all-wheel drive (eAWD) system, resulting in a total system output of 655 hp and 807 Nm. 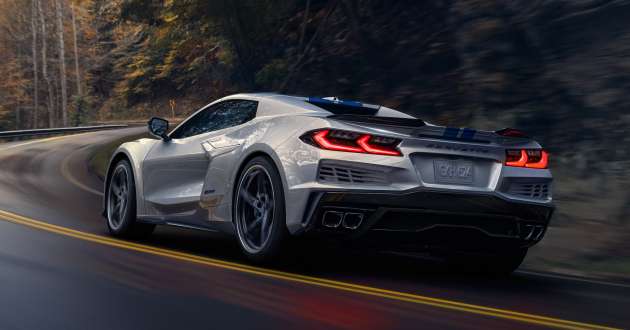 Chevrolet says the E-Ray is the quickest production Corvette in history, capable of getting from 0-96 km/h (0-60 mph) in just 2.5 seconds. For context, a Z06 with the optional Z07 Performance Package is 0.1 seconds slower in the same sprint. The company also claims a quarter-mile time of 10.5 seconds and a top speed of around 290 km/h (180 mph) – the electric motor will only provide assistance to the V8 up to 241 km/h (150 mph).

The smaller battery means electric-only driving is limited to a range of around 8 km (5 miles), but the aim here is performance and not efficiency. Users can also engage Stealth Mode, which forces the car to run on electricity at speeds of up to 72 km/h (45 mph) so the neighbours aren’t woken up by V8 noises early in the morning as you leave home. Very thoughtful.

Other modes include Tour, Sport, Track, Weather, My Mode, Z-Mode and Charge+, the last of which maximises the battery’s state of charge for extended lapping on track. The electrical components add about 136 kg to the final dry weight, with the coupe tipping the scales at 1,712 kg and the convertible at 1,749 kg, making the E-Ray the heaviest Corvette to date. 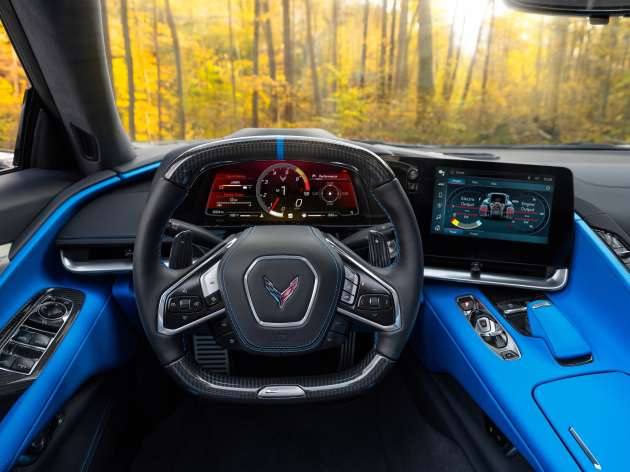 Other driving-related items include Performance Traction Management (PTM) modes for the eAWD system, Brembo carbon ceramic brakes, Magnetic Ride Control 4.0 with three settings, a lightweight 12-volt lithium-ion battery for the V8’s start/stop functionality, plus staggered 20- and 21-inch wheels with Michelin Pilot Sport tyres (stickier Pilot Sport 4S tyres are optional). It should be noted the rear tyres have an immense 345/25 profile, while the fronts are 275/30.

As for the styling, the E-Ray shares the same widebody look of the Z06 and gets its own specific five-spoke wheel design and dedicated badging. Customers can also specify an Electric Blue stripe kit, black exhaust tips as well as a carbon-fibre ground effects kit, wheels and trim finishes. The interior is pretty much a carbon copy of the regular Corvette, save for the hybrid displays in the infotainment system, new buttons Charge+ and idle start/stop, and a new Artemis Dipped theme.