2024 Chevrolet Blazer EV Rendered Based On Teasers And Spy Shots

General Motors first announced plans for an all-electric Chevrolet Blazer crossover in October 2021, when GM President Mark Reuss described it as “an affordable, high-volume entry” in the EV market.

In March 2022, Chevy offered a first glimpse at the electric Blazer in SS performance guise. We didn’t get to see too much of it, though. The short video only showed the charging port with a motorized flap, the front fender and the sporty six-spoke alloy wheels featuring SS badges.

Chevrolet didn’t reveal more but said the 2024 Blazer SS would become available in spring 2023. Then last month, we got to see the first spy shots of what was likely a 2024 Blazer EV prototype. While the vehicle had heavy camouflage on it and placeholder headlights and taillights, several details matched those from the teasers, convincing us it was the Blazer EV with the final production body.

Now, based on those spy photos and official Chevrolet teasers, our friends from TopElectricSUV have rendered the production version of the 2024 Chevy Blazer electric SUV. 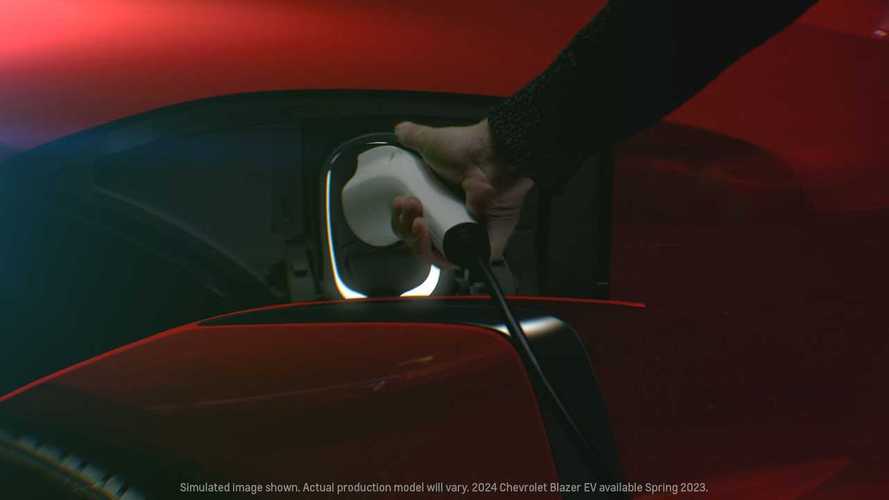 Compared to the Equinox EV that GM has teased more extensively, the Blazer is envisioned with a different fascia and headlamps housed in vertical enclosures shaped like fangs. Other noticeable elements at the front include the closed-off grille in body color, horizontal lower inlet that should channel airflow to the battery pack, and a skid plate.

Seen from the side, the Blazer EV features an unusually long hood for an EV, 21-inch aero-optimized alloys, and a roofline that slopes gently downward. Out back, key elements include a raked rear windscreen, shark-fin antenna, and a roof-integrated spoiler that descends and wraps around the sides of the rear glass.

The Blazer EV is expected to ride on GM’s third-generation electric vehicle platform and feature Ultium batteries. No specs are available but a range of around 300 miles sounds plausible. Much like the Cadillac Lyriq, the base model should feature a single-motor, rear-wheel-drive setup, while the go-faster SS model should be all-wheel drive thanks to a dual-motor powertrain.

The good thing is we won’t have to wait too much to see the Blazer EV’s design and learn about specs. During GM’s Q1 2022 earnings call in late April, CEO Mary Barra said the 2024 Chevrolet Blazer EV would be unveiled in July 2022 before entering production in mid-2023. The executive added that the Equinox EV’s reveal is scheduled for early fall 2022.

Related posts:
Is Lando Norris on the same level as Hamilton, Verstappen and Leclerc?