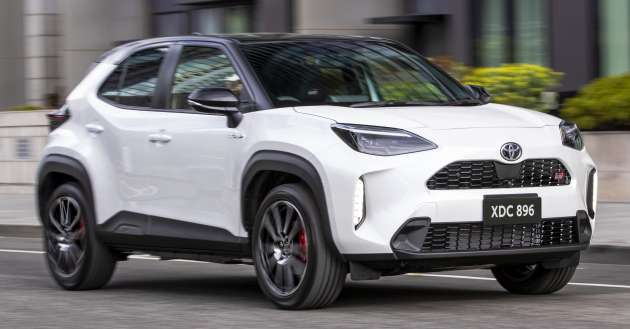 Following the introduction of the Toyota Yaris Cross GR Sport for the European market in September this year, the Japanese manufacturer has brought the dressed-up crossover to the Australian market, with pricing Down Under starting from A$35,840 (RM106,353).

In Australia, the Yaris Cross GR Sport is based on the GXL 2WD hybrid specification variant, adding styling elements from Toyota’s GR range of performance models, according to the company.

Powertrain for the Yaris Cross GR Sport is the 1.5 litre hybrid three-cylinder petrol setup which pairs the 91 PS/120 Nm petrol combustion engine with a pair of electric motor generators on the front axle to yield a combined output of 116 PS, says Toyota.

While its powertrain remains unchanged from its standard form, the GR Sport variant of the Yaris Cross receives revised suspension components to improve handling and sharpen steering response and feel. its front suspension gets a revised spring rate and increased rigidity for the lower control arm, while a bound stopper has been added to further control body roll and improve ride comfort, according to the company.

Further chassis revisions include the addition of an underfloor brace, as well as a second brace located along the lower rear of the vehicle which connects the cross-members to further add stiffness. In terms of ride height, the GR Sport variant sits 10 mm lower than the regular Yaris Cross variants.

Visually identifying the Yaris Cross GR Sport is a set of 18-inch twin-five-spoke alloy wheels in a machined finish, housing red brake calipers with GR logos on the units in front. Elsewhere, the exterior mirror covers are finished in black while GR badging denotes this is the sportier-kitted variant of the B-segment crossover.

In Australia, the Toyota Yaris Cross GR Sport is offered in a palette of exterior colours including Frosted White, Stunning Silver, Ink, Atomic Rush and Lunar Blue. Of these, Frosted White and Atomic Rush can be specified in a two-tone scheme that pairs with a black roof, joined by a silver ‘Yaris Cross’ nameplate.