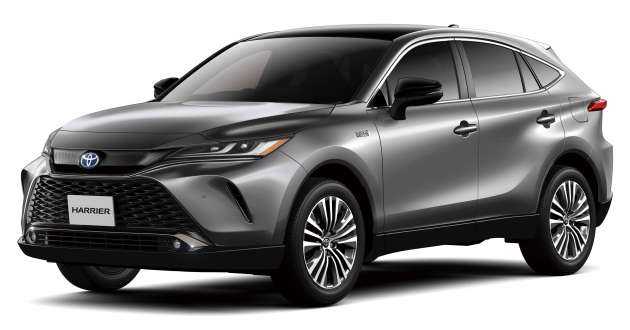 Toyota has launched a new plug-in hybrid variant of the fourth-generation Harrier in Japan, which is set to go on sale from October 31 this year. The PHEV option joins the existing petrol and hybrid powertrains that have been available ever since the SUV went on sale in the country in June 2020.

The 4NM electric motor is pretty much the same as the one found in the E-Four version of the hybrid powertrain, but the 5NM is more powerful than the hybrid’s 3NM that only manages 120 PS (118 hp or 88 kW) and 202 Nm.

Power for the PHEV’s electric motors is provided by an underfloor-mounted lithium-ion battery with an energy capacity of 18.1 kWh, which is good for a range of 93 km as observed by Japan’s ministry of land, infrastructure, transport and tourism (MLIT). In terms of fuel economy, the WLTC-rated figure is 20.5 km/l.

For charging, Toyota says with an AC input of 3.2 kW (200 V/16 A), it’ll take five hours and 30 minutes to fully charge the battery. There are three drive modes included, namely EV, Auto EV/HV and HV, with the first forcing the car to run on battery power for as long as possible.

Toyota quotes a vehicle weight of 1,950 kg for the Harrier PHEV, which is about 300-400 kg more than the petrol and hybrid variants. Unlike those options, the PHEV can only be had in a sole Z grade, while it’s three grades (Z, G and S) for the rest.

Model-specific design cues of the PHEV variant include a dedicated front grille featuring a diamond pattern as well as exterior badging. There’s also an external power supply system that can provide up to 1,500 watts (AC output at 100 volts).

In addition to introducing the PHEV variant, Toyota also added a new touchscreen infotainment system and digital instrument cluster, both measuring 12.3 inches. The Toyota Safety Sense suite has also been improved with a new function that detects oncoming vehicles when turning right at an intersection and pedestrians crossing the road when turning right or left.