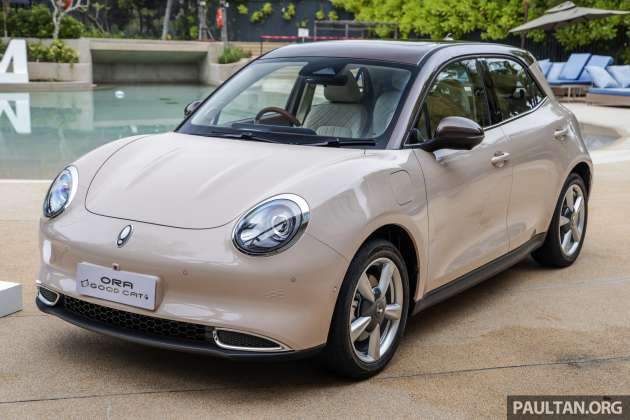 The Great Wall Motors (GWM) Ora Good Cat will finally make its Malaysian launch debut next Monday on November 28, 2022, and you can tune in to the event via Facebook Live at 3.30pm on the day.

The Good Cat is one of several models announced for our market when GWM officially entered Malaysia in July. Since the start of order taking several days ago, there have been over 100 bookings for the fully electric hatchback.

We’ll only get final pricing next week, but the Good Cat is expected to cost in the region of RM150k to RM160k, which would make it a rather affordable electric vehicle (EV). Close competitors in terms of price include the Hyundai Kona Electric that starts from RM156,538, while the BYD Atto 3 that is due to launch in December is estimated to also start from RM150k.

The Good Cat will be offered in four variants, namely the Tech, Pro, Ultra and Ultra G, all featuring a front-mounted electric motor rated at 143 PS and 210 Nm of torque. The Tech and Pro will come with a 47.8-kWh lithium-iron phosphate battery for up to 400 km of range on the NEDC test cycle (the WLTP test protocol will likely yield a 20% lower figure).

For charging, the Good Cat in Tech and Pro guises support an AC input (Type 2 connection) of up to 6.6 kW, with a full charge taking eight hours. There’s also DC fast charging (CCS2 connection) that gets the battery from a 0-80% state of charge (SoC) in 46 minutes.

Stepping up to the Ultra and Ultra G, you’ll get a larger-capacity, 63.1 kWh ternary lithium battery that is good for up to 500 km of range following the the NEDC standard. The charging inputs are the same, but but it now takes around 10 hours for a full charge with AC charging and 40 minutes to get from a 0-80% SoC with DC fast charging.

As for equipment and further specifications, we have almost everything you need to know in our first look video, which you should check out if you’re interested in the Good Cat. Are you looking forward to the Haomao’s launch? Which variant do you think is worth your hard-earned money and how much if it are you willing to part with for it?

Related posts:
Bengaluru to Assam in a Mahindra TUV300: A once-in-a-lifetime trip!