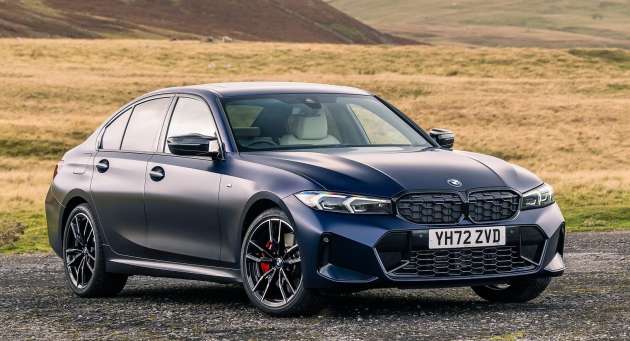 The BMW 3 Series facelift range was launched in Malaysia yesterday, and we’re getting the G20 LCI in three flavours – the 320i, 330i and 330e, all exclusively available in M Sport trim. No M Performance model or the long wheelbase variant at launch, but both are slated to arrive in March 2023.

BMW Malaysia has confirmed that two more variants of the 3 Series facelift are coming in March this year, and given that both the M340i xDrive and 330Li were sold here in pre-facelift form, the two are very likely to be on their way to local showrooms.

The six-pot has an attached 48-volt mild hybrid system. The starter-generator is capable of providing a boost of 11 PS, helping out with brake energy regeneration and supplies the car’s 12-volt electrical system.

The standard M Sport look is already very aggressive, so there isn’t a lot to set the M Performance apart. But you can look out for the mesh in the kidney grille, trapezoidal exhaust finishers, a slim rear spoiler and M wing mirror caps in gloss black. The latter is new to the facelift. There’s a “Pro” package that adds on more black exterior trim and red brake calipers. Not enough? Here’s the M340i with the entire M Performance Parts catalogue slapped on.

On the other end of the scale, the 330Li has a 110 mm longer wheelbase (2,961 mm) over the regular sedan, and is also 6 mm taller at 2,961 mm. With more length between the wheels, rear occupants benefit from an additional 42 mm of legroom. The G20’s looks aren’t severely compromised by the stretch, so the 330Li is a good option for the family man.

The pre-facelift 330Li was sold here in M Sport form, but now that the standard wheelbase 3er range is exclusively M Sport, could the Li switch to a less aggressive image and more forgiving suspension? BMW Malaysia has hinted that the 330Li could have a softer setup – LWB, more space, more comfort, makes sense.