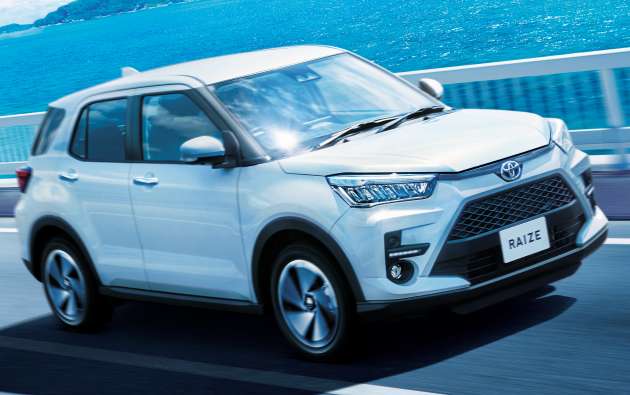 Alongside the refreshed Daihatsu Rocky, Toyota has also introduced that car’s sibling, the 2022 Raize, in its home market of Japan. Like the D-badged model, the compact SUV comes with a number of improvements and two new naturally-aspirated powertrains.

The biggest news here is the e-Smart Hybrid, a series hybrid system in the vein of Nissan’s e-Power. Under the bonnet lies a WA-VEX 1.2 litre Atkinson-cycle three-cylinder engine, which produces 82 PS at 5,600 rpm and 105 Nm of torque from 3,200 to 5,200 rpm. None of this gets sent to the front wheels, however.

Instead, the car is powered solely by a 106 PS/170 Nm electric motor, which derives its energy from the petrol mill that functions as a generator. The benefits of this setup are compact packaging and a smaller and more cost-effective 4.3 Ah lithium-ion battery, plus an impressive fuel efficiency figure of 28 km per litre (3.6 litres per 100 km) on the WLTP cycle.

Other new features include a Smart Pedal (S-PDL) function for one-pedal driving, exterior puddle lamps and an optional 150-volt, 1,500-watt power supply for charging electronic devices and powering appliances in emergencies. Unlike the Rocky, there’s nothing to differentiate the hybrid model from the regular Raize, save for the usual Hybrid Synergy Drive badge at the rear. 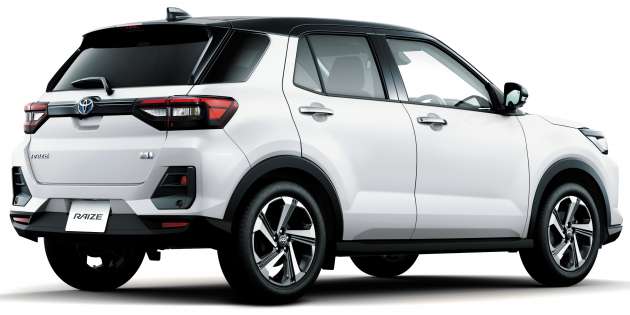 The other engine option is the regular WA-VE version of the 1.2 litre engine, first seen in Indonesia and replacing the existing 1.0 litre 1KR-VET turbocharged three-pot on front-wheel-drive models (the forced-induction triple is now all-wheel drive only). It makes 87 PS at 6,000 rpm and 113 Nm at 4,500 rpm, down 11 PS and 27 Nm on the 1.0 litre.

The shortfall in performance is compensated by the 10% reduction in fuel consumption, now rated at 20.7 km per litre (4.8 litres per 100 km). Curiously, Toyota is claiming both improved low-end acceleration despite the lower outputs. A dual-mode CVT (D-CVT), which uses a combination of belt and gear drive, remains the sole transmission option for petrol-powered Raize models.

Aside from the new powertrains, the Raize also benefits from some small updates, including the fitment of an electronic parking brake with auto hold. This enables the addition of a stop and go function for the adaptive cruise control, making traffic jams a much more bearable experience. 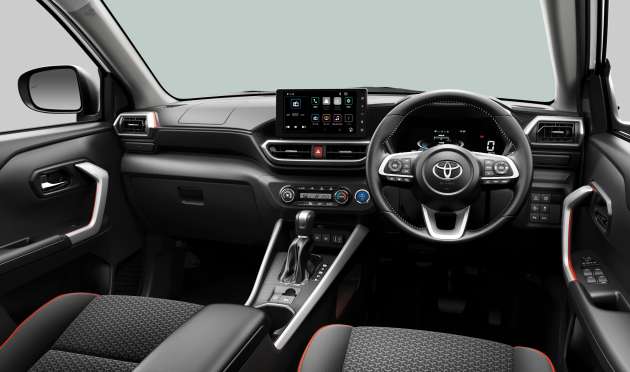 Speaking of driver assistance tech, the Raize gets an improved stereo windscreen camera, adding nighttime pedestrian detection to autonomous emergency braking and increasing the number of signs the traffic sign recognition system can detect. Unlike the Rocky, the Toyota does not receive the new roadside deviation warning and stagger warning functions, nor cornering trace assist. Instead, buyers can now opt for Smooth Grey Mica Metallic paint as the body colour.

Could we see the new powertrains in the Perodua Ativa soon? The e-Smart Hybrid is likely, given that Perodua has already been seen testing the Rocky version on our shores. However, the petrol 1.2 litre would also make an interesting addition as an entry-level engine option, dropping prices below the RM60,000 mark. This would make lower-spec Ativa models a seriously compelling alternative to high-end versions of the Myvi, although the national carmaker may want to avoid cannibalising sales of its bestseller.