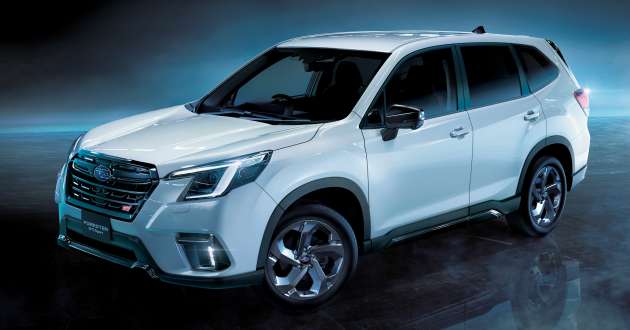 The fifth-generation Subaru Forester will soon be available in a new STI Sport variant in Japan, several months after the SUV got its facelift last June.

Based on the existing Sport grade, the new offering comes with several enhancements which are meant to meet the needs of customers who want a sportier drive. This is provided by new dampers with STI-specific tuning that the company claims “realises handling like a sports sedan,” while also providing a high-quality ride.

As for the visuals, the exterior gets quite a few glossy black parts, along with STI badging and dark-coloured 18-inch aluminium wheels. Inside, the instrument cluster also gets STI touches, while the seats are trimmed in black and Bordeaux red Nappa leather with red stitching – this is also applied to other areas of the cabin like the knee pads, arm rest, dash insert and door panels.

Pricing will be announced at a later date but it’s safe to say it’ll likely cost more than the Sport that starts from 3.3 million yen (RM106,369), inclusive of the 10% consumption tax. Four colours are offered, including Crystal White Pearl (a cost option), Ice Silver Metallic, Magnetite Grey Metallic and Crystal Black Silica.