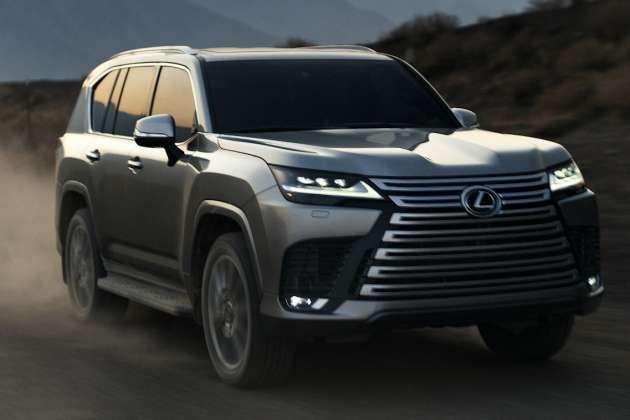 Four months after the new Toyota Land Cruiser was revealed, Lexus has pulled the covers off that car’s higher-end sibling, the LX. The luxury off-roader has received its own comprehensive redesign, lifting plenty of innovations from its twin while pampering its occupants to an even greater degree.

Like the Land Cruiser, the LX is built on the ladder-frame variant of the Toyota New Global Architecture (TNGA), called GA-F. The utilitarian construction may have been retained, but it has been extensively overhauled, with new welding techniques – including the world’s first use of curved tailored welded blank technology – contributing to a 20% jump in rigidity.

This, together with the increased use of high-tensile steel in the body and aluminium in the doors, body and roof (the latter being a Lexus first), has resulted in a massive 200 kg weight saving over the previous model, improving fuel economy and reducing emissions. The engine has also been moved 70 mm rearward 28 mm downward for a lower centre of gravity and better weight distribution.

Meanwhile, the body’s greater number of spot welds and optimised adhesive application has provided further strengthening, benefitting the LX’s handling responsiveness, ride comfort and off-road performance. To make sure the Lexus gets through even the harshest terrain unscathed, the frame has also received some strengthening, with taller side rails and repositioned cross members; thick steel and high-tensile steel plates have also been fitted to protect the body. 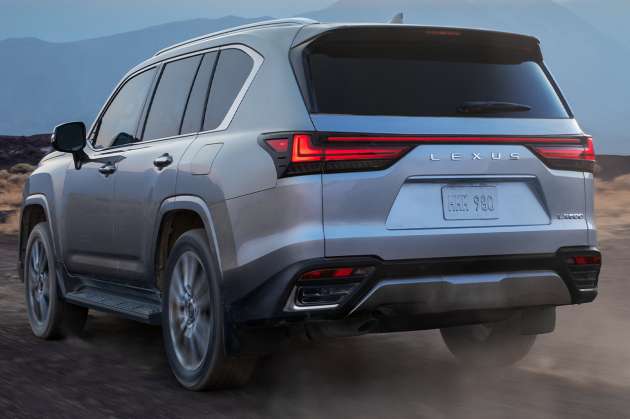 The basic suspension setup is the same – double wishbones at the front and a live rear axle with trailing arms and coil springs. It’s been retuned, however, with optimised geometry and spring constant at the front, revised arms at the back and a 15 mm increase in the rebound stroke length (20 mm at the rear). All this improves stability and comfort and allows the wheels to better maintain contact with the road or terrain.

The rear dampers have also been repositioned, now placed outside of the lower control arms and angled to match the axle’s travel. As they are able to follow the vertical movement of the wheels better, the damping effect has been increased, improving shock and vibration absorption. An electronic differential lock is fitted on both the front and rear axles.

Additionally, the LX benefits from the fitment of revised air/hydraulic Active Height Control (AHC) suspension, offering a greater range of ride height settings and a second spring rate switching device at the rear, instead of only at the front, making it quicker to change the height. Adaptive Variable Suspension (AVS) dampers are also fitted, now with a linear solenoid valve system for better damping force switching. 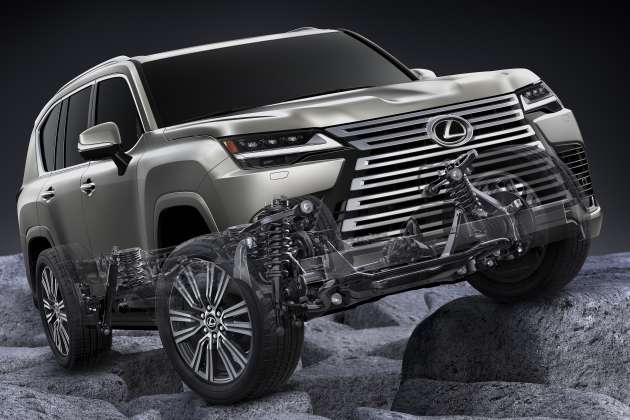 New to the LX is electric power steering that replaces the previous hydraulic system, providing speed-sensitive weighting and a more linear and faithful response. There’s also a brake-by-wire system that again makes for more linear braking characteristics, along with the ability to precisely brake any wheel to counteract any slippage or wheelspin in off-road driving.

Aside from the usual hill descent control, the LX also now comes with Crawl Control, essentially Toyota’s version of Land Rover’s All Terrain Progress Control (ATPC). This low-speed, off-road-biased cruise control system automatically operates the accelerator and brakes to minimise wheel slippage and brake lock, so the driver only has to focus on providing steering input.

Depending on the market, there will be up to two engine options available at launch, both carried over from the Land Cruiser. The LX 600 is powered by a V35A-FTS 3.5 litre twin-turbocharged V6 that made its debut on the current LS 500, producing 415 PS and 650 Nm of torque. 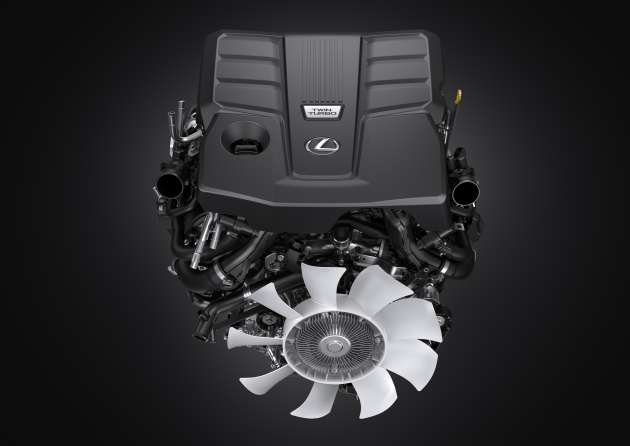 An oil level sensor fitted to the LX detects a drop in level due to excessive body tilt, although the lubrication system can continue to supply oil up to an incline of up to 45 degrees up and down and side to side. The bearings and oil seals are also water- and dustproof in anticipation of river crossings and dusty environments.

The Europe-only LX 500d, meanwhile, utilises a 299 PS/700 Nm 3.3 litre twin-turbo diesel mill. No, you don’t get a hybrid option, although an LX 750h is rumoured and will likely be offered somewhere further down the line, using the electrified 3.3 litre petrol V6 from the latest Tundra pick-up. A ten-speed automatic transmission is fitted as standard across the range. 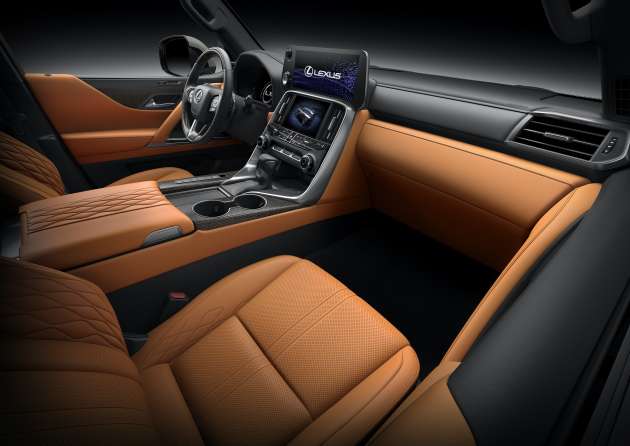 At the rear, the LX has its own C-shaped D-pillar design, along with full-width L-shaped taillights and “Lexus” script that are both becoming the norm on the latest models. The body-coloured section of the rear bumper also rises upward, baring a blacked-out insert with twin L-shaped chrome corners. The car retains the 2,850 mm wheelbase of past models but the A-pillars have been pushed rearwards for a cab-backward look. The wheels measure up to 22 inches in diameter, the largest ever offered on a Lexus.

Inside, the LX is a step change from its predecessor. Like the new NX, it ditches the much-maligned Remote Touch interface in favour of a new touchscreen-based system utilising the freestanding 12.3-inch centre display. Sitting just underneath it is a second seven-inch touchscreen, allowing drivers to manipulate the climate control, ride height, drive modes and Multi-Terrain Select settings.

Speaking of which, Multi-Terrain Select has six modes to choose from – Dirt, Sand, Mud, Deep Snow, and Rock and a new Auto setting – and is no longer limited to low range. The Multi-Terrain Monitor, meanwhile, uses the 360-degree camera system to give drivers a better view of the surrounding terrain, including a Land Rover-aping under-bonnet view and a world-first Back Underfloor View. The system can be used in conjunction with the off-road display on the lower screen, showing key information such as vehicle inclination. 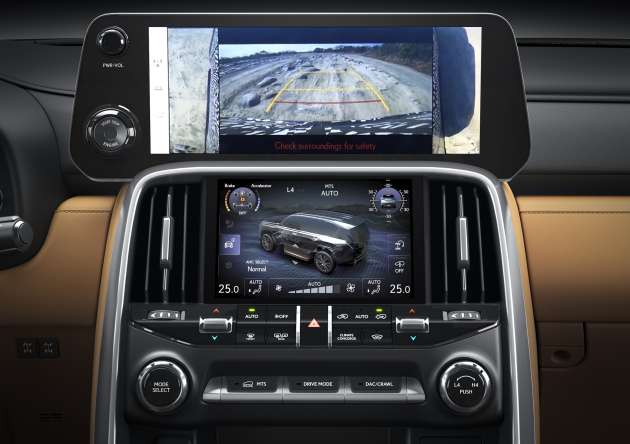 Other new tech include a start button fingerprint scanner, a “Hey Lexus” voice control system, support for multiple user profiles and preferences, a choice of either a ten-speaker Lexus Premium Sound System or a Mark Levinson system with an astonishing 25 speakers (the most on any Lexus) and wired Apple CarPlay and Android Auto compatibility. A wireless connection is set to be offered in a future software update.

In terms of design, the LX uses a dual-level structure on the dashboard to make it look thinner, while the centre air vents are placed on either side of the lower touchscreen to make the cabin appear wider. The lower dashboard level also flows seamlessly into the door handles for a more cockpit-like look. The A-pillar grips have also been optimised in terms of thickness and angle to balance form with function.

The seat cushions, on the other hand, feature a new material with high stability and pressure dispersion to improve support and comfort while suppressing lateral hip sway and upper body tilt. The seating position has also been adjusted for a more natural placement of the hands on the steering wheel and the feet on the pedals – which, by the way, have been spaced further apart for more precise operation. 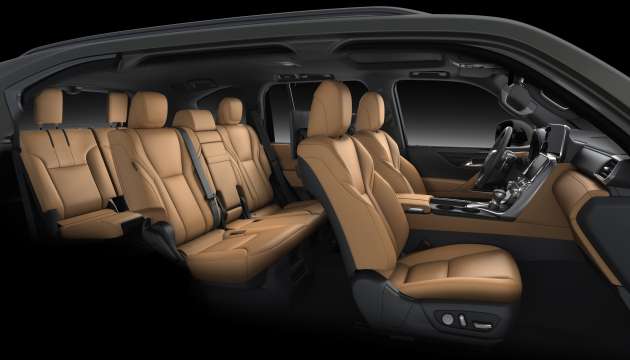 At the rear, the second-row pews offer greater bolstering, while the window sunshades get a black ceramic treatment to better block out the sun. The third-row seats also can be reclined electrically to prioritise either passenger comfort or luggage space; it works in conjunction with a new Multi-Seat Auto Arrange function that folds all the rear seats and pushes the front seats forwards to maximise cargo capacity.

The LX is fitted with the Lexus Safety System+ suite of driver assistance features, improved with an increased response range for autonomous emergency braking (with cyclist, pedestrian and cross-junction oncoming vehicle and pedestrian detection). 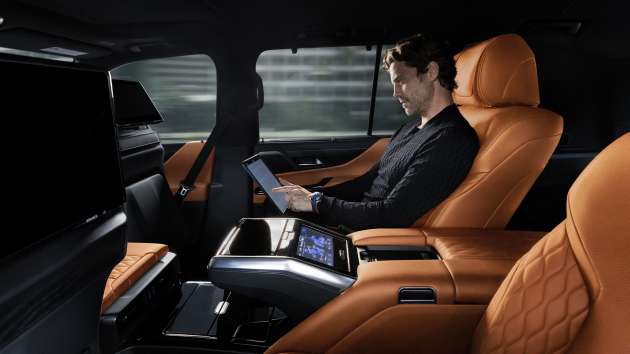 For the first time, Lexus is offering a new, ultra-luxurious four-seater Executive variant, taking the fight to posh versions of the Range Rover. The plush rear seats come with concave headrests, backrests and cushions to wrap around the body and provide maximum lateral support, as well as soft urethane padding that absorbs vibrations even when the LX is being driven off-road.

To maximise rear seat space, the front passenger seat can be pushed forward and tilted up to 48 degrees at the push of a button to provide up to 1,000 mm of legroom. Also fitted are a footrest, an ottoman, special reading lights, a unique audio system, a control touchscreen, a Qi wireless charging pad and a tiltable rear infotainment touchscreen. The cupholder cover also features a self-healing scratch-resistant finish to enable it to be used as a note table, while air vents have been placed in the ceiling to blow a gentle breeze.