The updated minivan broke cover this week in Korea, ahead of its anticipated debut in the U.S. next week. The Kia Carnival, as it’s known in other markets around the world, features a distinctly tougher look liberally borrowed from Kia’s mega-seller Telluride and related Hyundai Palisade crossovers.

We don’t know much about the new Sedona, including what might be under the hood or how much it will cost when it goes on sale. Kia also didn’t share any pictures of the updated interior, but we’ll be keen to know more next week when the van is likely revealed for U.S. buyers.

The new Sedona sports a redesigned front end complete with a new grille and headlights, including LED daytime running lights that reach from the fender and kink steeply toward the lower bumper. The grille, a diamond-mesh pattern, also surrounds lights set apart from the van’s headlights and lower fog lights. At the very least, it’ll be unmistakable at night.

The long and wide body sides are still covered in broad stretches of glass and offer two sliding doors—a van must-have—although a chunky rear roof pillar cribbed from the Hyundai Palisade is an abrupt left turn from traditional minivan style. 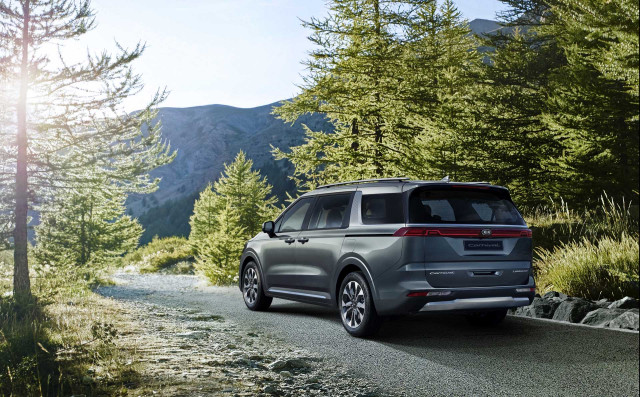 In Korea, then-lead Hyundai designer SangYup Lee told The Car Connection that the bolder, bigger rear roof pillar on the Palisade visually indicated strength for family buyers. Lee now leads design for all Hyundai and Kia vehicles, and it the Sedona looks as if it will follow suit.

Around back, the Sedona features a full-width LED taillight and a familiar liftgate.

We should know more about the new Sedona next week.