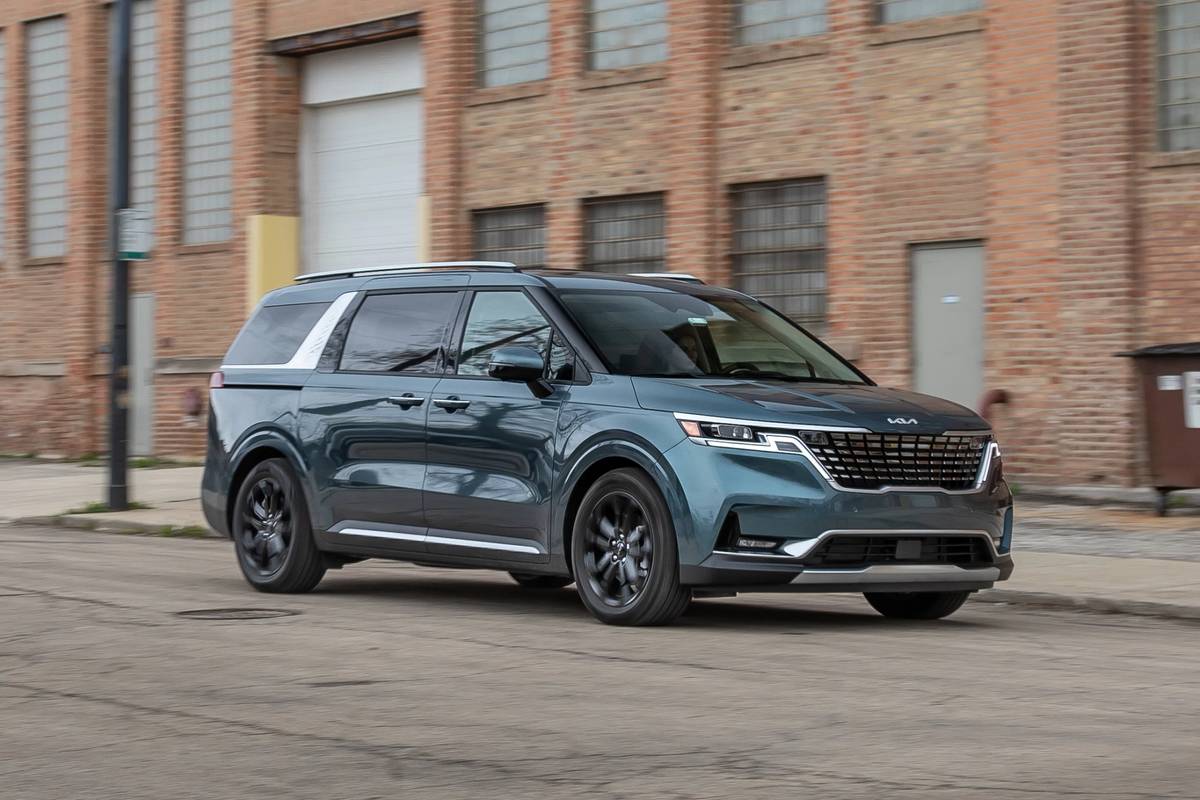 The verdict: Parents usually have a few tricks up their sleeves when it comes to carting kids around, and the 2022 Kia Carnival adds a few more much-needed features that make it less of a chore. Ride and handling issues, however, make the Carnival just short of magical.

Versus the competition: The Carnival’s new convenience goodies and affordable price make it more competitive, but other minivans have more powertrain options. It also comes up short against the Chrysler Pacifica’s blend of utility, technology and driving refinement.

Wait, what’s the Carnival? Kia reinvented its Sedona as the Carnival for 2022, ditching the previous version’s obvious minivan styling for a more blocky, SUV-like look. It also debuts the brand’s new badge, a sleeker and more fluid version of the previous Kia logo.

Kia may call the Carnival a “multipurpose vehicle,” but it’s actually a minivan that competes with the Chrysler Pacifica, Honda Odyssey and Toyota Sienna. See them compared.

Color me surprised by the Carnival’s responsiveness — it’s quick, and not just for a minivan. The sole engine is a 3.5-liter V-6 good for 290 horsepower; it pairs with an eight-speed automatic transmission that delivers brisk, no-nonsense shifts and smooth power delivery. The drivetrain never felt lacking even fully loaded with my family of five.

Sadly, smoothness is not a theme. The Carnival’s soft suspension tuning makes for less than graceful handling. It careens over bumps and through turns with roller-coaster-esque dips and floatiness, and exhibits a lot of body lean in corners. The Carnival’s steering tuning doesn’t help; a light, uncommunicative steering wheel makes for a numb, disconnected driving experience.

In terms of ride, the Carnival remains composed over smaller bumps, but larger ones unsettle it with impact harshness shimmying and vibrating the cabin. The Pacifica does a better job delivering a more comfortable ride and handling balance along with better maneuverability.

The Carnival’s estimated fuel economy is similar to key rivals, but here, too, there’s room for improvement. It’s EPA-rated at 19/26/22 mpg city/highway/combined — close to the 2021 Pacifica and Odyssey’s 19/28/22 mpg ratings. My biggest complaint here is a lack of choice: Chrysler offers a plug-in hybrid Pacifica that delivers much better fuel efficiency, and the 2021 Toyota Sienna hybrid also offers impressive efficiency. The Pacifica and Sienna are also available with all-wheel drive (the Carnival is front-wheel drive only).

The Carnival is available in LX, EX, SX and SX-Prestige trims and offers two different second-row seating configurations — one that’s roomy and versatile, and one families should skip.

My SX test model came with the Slide-Flex system that makes the second row more flexible. There are three seats that slide forward and back and side to side. They also recline independent of each other; you can slide the middle seat forward, for example, so it’s easier for a front-seat passenger to reach a belted child. It sounds similar to the 2021 Honda Odyssey’s Magic Slide system, but with a twist: In the Carnival, you can fold down the middle seat to convert it to a table with cupholders. Cool and useful!

In the not cool and less useful corner is the VIP Lounge Seating on the top-of-the-line SX-Prestige trim I also tested. The seats are much wider than the regular second-row captain’s chairs and have power controls, heating, ventilation, wraparound head restraints and pop-out leg extensions. This sounds lovely for getting a pedicure, not hauling around my kids. First, no one can use the third row when the seats are fully reclined because they encroach on the rear-most seating area. Second, it’s difficult to access the third row because the seats’ extra width makes the walkway between them quite narrow — even once they’re slid all the way to the side doors.

The Carnival’s small items storage spaces — a must-have for my snack-obsessed, device-happy family — aren’t that impressive, either. The center console storage box is just ho-hum in terms of size and functionality (the Pacifica and Odyssey do this much better), and there aren’t a lot of cubbies in the doors for storing small stuff. The third row has cupholders but no device storage bin that others have (which means my 10-year-old’s stuff gets tossed everywhere). It also doesn’t have underfloor storage bins like the Pacifica.

In cargo, again, the Pacifica is unbeatable thanks to its Stow ‘n Go seating system that lets you quickly and easily tumble the second-row seats into the floor. The Carnival’s regular second-row seats fold down or can be removed — a strenuous, clumsy undertaking — but the lounge seats don’t fold or come out. However, all versions of the Carnival have a third row that easily folds into the floor.

By Kia’s numbers, the Carnival has 40.2 cubic feet of manufactured-estimated cargo space behind the third row, a few cubic feet higher than its competitors.

A Funhouse of Features

Family-friendly features make or break a minivan, and the Carnival has a lot more than the old Sedona. All of them are welcome — except for one.

First, the hits: An optional in-cabin camera system with a zoom function and night vision allows first-row occupants to keep an eye on the kids in back. It’s similar to the Pacifica and Odyssey’s in-cabin cameras but better executed; the Carnival’s images are crisper and the placement of the camera gives a great view of both rows. The system is paired with a voice amplification feature — which I found gimmicky — and goes in EX, SX and SX-Prestige trims. 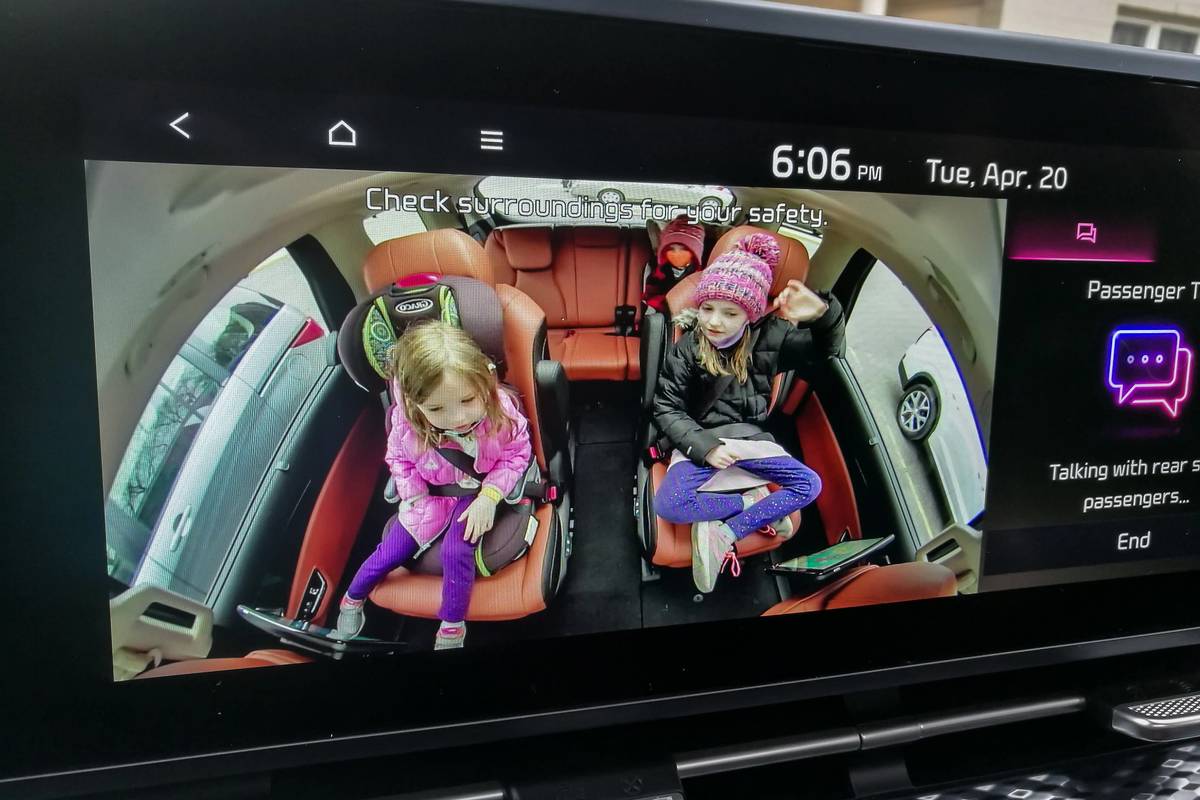 The Carnival’s multimedia system is another hit. It comes standard with an 8-inch touchscreen display with Apple CarPlay and Android Auto. EX and higher trims have a 12.3-inch touchscreen, and the SX-Prestige gets a digital instrument cluster connected to the touchscreen under a continuous piece of glass. It looks slick, has straightforward menus and the touchscreen is very responsive. The system also has different profiles, helpful for tailoring music favorites and other settings to specific drivers.

I also found the proximity-activated hands-free sliding doors very useful. Walk up to the doors with the key in your purse or pocket and they will automatically open after three seconds — great for when your hands are full of groceries (or kids). The feature is standard across the lineup; a hands-free power liftgate is standard on all but the base model. Chrysler offers a kick-activated sliding door and cargo door system on the Pacifica, but it’s not standard. The Odyssey has an optional hands-free liftgate.

The rear entertainment system, which goes in SX and SX-Prestige trims, is a mixed bag. The good: The two large second-row touchscreens do a lot. You can connect to a Wi-Fi hot spot and stream Netflix, YouTube or the news, or connect to a device via an HDMI cable or, with an Apple or Android device, through wireless screen mirroring. There’s also a kids mode with lots of games that all three of my children enjoyed. It’s Baby Shark-branded — cringey, said my 10-year-old — but she enjoyed the games and YouTube Kids option.

A few things need work. First, unlike some other vans, there’s no hot spot capability in the Carnival, so you need an external hot spot or a smartphone’s hot spot capability to connect to YouTube or Netflix. Second, you need to download a remote control app to enable the rear entertainment system even if you don’t want to use your phone to control it. This seems like an unneeded extra step since giving my phone to my kids to control the system is firmly in the “um, no way” column. (I was driving a preproduction Carnival, so it’s possible this arrangement may change.) Lastly,  the screens remind me of something out of a New York cab; rather than being flush with the seatback like the Pacifica’s Uconnect Theater dual-screen system, the screens pop up and out like an aftermarket add-on. With kids hustling in and out of the van, I could see someone snagging a backpack on one or a kid in a car seat kicking the screen. They also reduce the amount of usable space when installing a rear-facing car seat.

In the miss column is the voice recognition system that goes in EX, SX and SX-Prestige trims. It lets second-row occupants control numerous functions with voice commands by pushing a button on the ceiling. Passengers can do things like change the radio station or turn on the heated steering wheel — but why?! This is not a taxi, and giving my passengers (tiny humans prone to pranks) control is another tick in the “no way” column.

Like its competitors, the Carnival comes with a host of standard active-safety features: automatic emergency braking with pedestrian detection, lane keep assist, automatic lane-centering steering, a driver attention warning system, blind spot intervention, rear cross-traffic alert and reverse automatic emergency braking. In addition, the Carnival offers a couple of standard safety features others don’t have, such as an ultrasonic rear occupant alert system and the Safe Exit Assist system, which uses radar to detect approaching traffic and can prevent a rear door from opening to avoid a collision.

Among my favorites is the available blind spot view monitor that’s offered on other Kia vehicles. It projects the view from adjacent lanes in the instrument cluster when a turn signal is engaged. I find it hugely helpful when navigating city streets shared with pedestrians and cyclists. 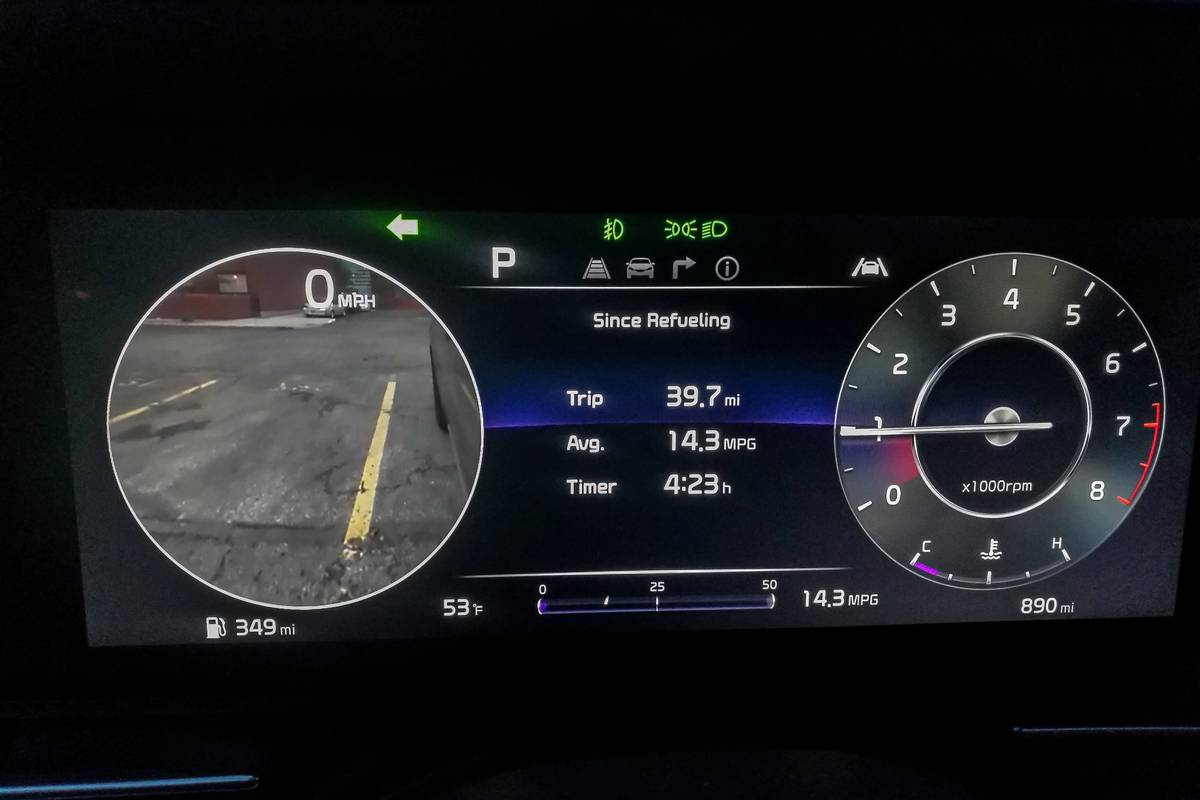 Although the Carnival’s handling needs work, it impresses in many other ways. While I’m not a huge fan of its SUV styling and Kia’s smoke-and-mirrors attempt to call it anything other than a minivan, the new Carnival is a captivating competitor.