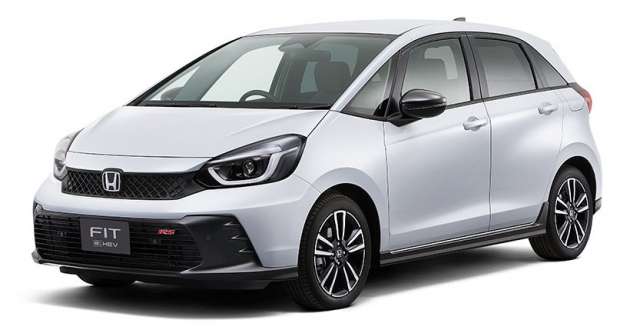 Less than three years after its initial debut at the 2019 Tokyo Motor Show, the fourth-generation Honda Jazz has been given a facelift in Japan. Known as the Fit there, the hatchback will continue to be offered in five styles, although the previous Ness has been discontinued.

As it stands, the available styles include the Basic, Home, Luxe and Crosstar, with the replacement for the Ness being a new RS option. Each version continues to get specific styling cues to set them apart, with the RS focusing on sportiness.

Visually, the RS sports a diamond mesh grille and a redesigned front bumper, the latter featuring a large lower intake and prominent side inlets. Red RS badges and deeper side sills are also part of the exterior styling, along with more aggressive wheels.

Moving inside, the RS comes with contrast stitching on the leather steering wheel, paddle shifters to control the level of regenerative braking and a drive mode selector (Normal, Sport and Econ options) in place of the instrument cluster dimmer. The rest of the cabin appears to be unchanged, retaining a seven-inch digital instrument cluster and nine-inch infotainment touchscreen.

Honda says the Jazz (Fit) will come with the e:HEV system, which is claimed to be tuned to provide increased motor output and improved accelerator responsiveness, but we don’t have any new figures. In the pre-facelift Jazz, the e:HEV system with Honda’s i-MMD (intelligent Multi-Mode Drive) technology featured a front-mounted electric motor rated at 109 PS and 253 Nm of torque.

A 1.5 litre Atkinson cycle petrol engine (98 PS and 127 Nm) acts as a generator for a battery that powers the electric motor, but at higher speeds, it can provide direct drive via a lock-up clutch.

As for changes to the other Jazz styles, the Basic, Home and Luxe all get a new front bumper that eschews the C-shaped sections at the corners for a simpler design. The Home gets a chrome accent for its grille to distiniguish it from the Basic, while the Luxe adds further chrome trimmings at the rocker panels and contrast side mirrors.

Meanwhile, the crossover-inspired Crosstar receives a new mesh insert for the grille that resembles that of the latest HR-V, and the lower grille has a coloured frame added on. The side sills also get a more noticeable trim piece to contrast the black body cladding, the latter retained, as is the trapezoidal-shaped front sections. The Crosstar continues to be the only one available with two-tone finishes, while the other styles are monotone only.

More details, including pricing, will be revealed closer to the Jazz facelift’s launch in Japan, which is scheduled to take place soon in the autumn of this year. Over here, the City Hatchback is the replacement for the Jazz, which has been discontinued from our market and a few others in the ASEAN region, unless you live in Singapore.