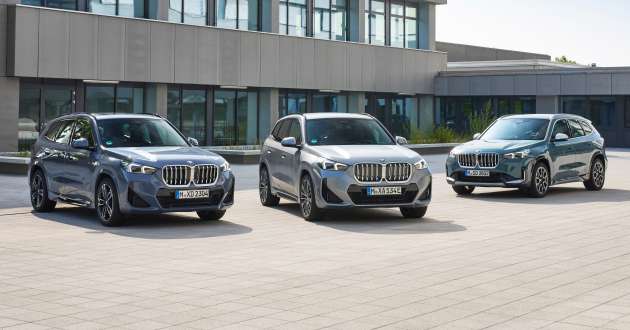 BMW has released plenty of photos of the all-new, U11 X1, which first made its world debut in June this year. Now in its third generation, the X1 is the entry model in the German carmaker’s X line-up and will be offered with internal combustion engines (petrol and diesel), plug-in hybrid and fully electric powertrains – all roll off a single assembly line for the first time at BMW Group Plant Regensburg.

The mill is augmented by a 48-volt mild hybrid system that includes an electric motor rated at 19 PS (19 hp or 14 kW) and 55 Nm, resulting in a total system output of 218 PS (215 hp) and 360 Nm. The mild hybrid system also features a 20 Ah battery in the luggage compartment and serves to boost both efficiency and power delivery.

Meanwhile, the sDrive18d has a 2.0 litre four-cylinder turbodiesel with 150 PS (148 hp) and 360 Nm sending drive to the front wheels. A seven-speed dual-clutch Steptronic is standard for all ICE variants, including the sDrive18i and xDrive23d, the latter also benefitting from a mild hybrid system. There will also be plug-in hybrids in the form of the xDrive25e and xDrive30e that use 1.5 litre turbocharged three-cylinder engines paired with more powerful electric motors.

The fully electric iX1 is a first for the X1 and is offered as the xDrive30 with two electric motors – one for each axle – to provide 272 PS (268 hp or 200 kW) and 494 Nm. These are powered by a lithium-ion positioned flat within the vehicle’s underbody that has an energy capacity of 64.7 kWh, which is good for up to 438 km of range on the WLTP cycle.

The redesign serves to provide the SUV with greater presence, with notable changes being a more upright and larger front grille as well as a muscular bonnet. The headlamps are also new and carry a DRL signature similar to the latest 3 Series facelift with inverted L-shaped bars.

The vehicle’s profile has also been altered to appear more dynamic and you’ll now find recessed door handles to go along with the cleaner surfacing. Moving to the rear, the LED taillights have a L-shaped light signature to complement the revised stance, while the reprofiled tailgate has sharper creases than before.

Referring to the photos, the sDrive18d is trimmed in the xLine package, which is one of three available, with others being a base option and the M Sport. With the xLine, the SUV gets contrasting silver trim accents near the air curtains on the front bumper, along with a prominent faux skid plate under the lower intake. These elements are mirrored for the rear bumper and the sides also gain silver rocker panels.

The M Sport look is what you see on the xDrive23i and iX1 xDrive30, with standout design cues being a more aggressive front bumper that features a bigger, hexagonal-shaped lower intake as well as carved-out sections that integrate the air curtains. As for the rear, the M Sport’s rear bumper has a bottom trim piece with a diffuser-like element set below a large blacked-out area that mimics the 3 Series with the M Sport package. One small point to note is this xDrive30 is without the blue accents like we saw during the global debut, but you can identify an iX1 by its “i” badge on the grille and blue ring on the BMW roundel.

Inside, the overhaul is equally as extensive, with a dashboard design that appears to be lifted from the U06 2 Series Active Tourer. The BMW Curved Display takes centre stage here, with a 10.25-inch instrument cluster display and a 10.7-inch central touchscreen. Both are powered by BMW Operating System 8, so there’s crisp and colourful graphics, plenty of connected services and a digital voice assistant on hand to serve passengers.

The floating centre console is a concept lifted from the iX, so there’s no longer a storage space beneath the armrest like you got with the outgoing X1. The 40:20:40-split rear seats are still here and they can be slid forwards and back, reclined or folded down completely for up to 1,600 litres of boot space – 540 litres is with all seats in place. The iX1’s cargo capacity is from 490 litres to 1,495 litres instead.

Take your time to go through these photos and let us know what you think of the all-new X1? Do you like the new look? What would you change on it? Let us know your thoughts in the comments below.