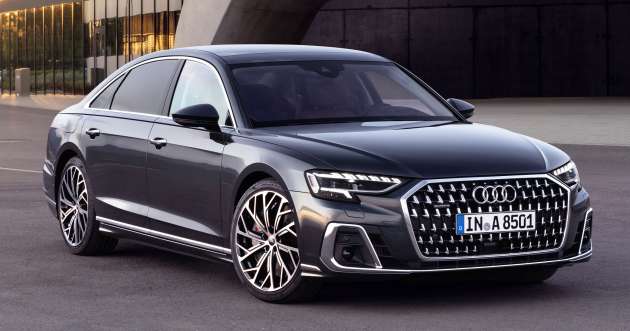 Four years on from the debut of the D5-generation Audi A8, the Ingolstadt-based manufacturer’s flagship sedan has now premiered in facelifted form. Here, the revised styling is led by a redesigned singleframe grille that is now wider and more prominent with increasing angles from its base to its top.

The mid-lifecycle update for the D5-generation A8 brings minimal changes to the car’s exterior dimensions, says Audi, which now measures 5.19 m in length with a 3.0 m wheelbase, 1.95 m wide and 1.470 m tall; the high-performance S8 measure approximately 10 mm longer, said the automaker.

In addition to the revised styling, the mid-lifecycle revision brings updated lighting equipment front and rear. In front, the digital matrix LED headlamps employ digital micromirror device technology, where each headlamp unit packs approximately 1.3 million micromirrors in order the dispersion of light to be controlled with much greater precision, such as pixels on a screen.

This enables specific lane and orientation projections of light on highways, for instance illuminating the driver’s own lane especially brightly, as well as to help the driver remain within their own lane when passing through construction zones. Additionally, the digital matrix LED headlamps also generate “coming home” and “leaving home” functions, where projections can be cast on the ground or the wall.

As with the debut of the D5-generation A8 in 2017, the 2022 facelift features powertrain specifications that are augmented by mild-hybrid electrification across the board, driven by the car’s 48-volt electrical architecture. At launch, the facelifted A8 comes in three powertrain variants.

Audi also mentions the availability of a diesel version, while a plug-in hybrid will follow later on in the D5 A8’s lifecycle. Adaptive air suspension is standard on the facelifted A8, as is progressive steering. Optional chassis equipment includes dynamic all-wheel steering and and a sport rear differential, the latter two standard-fit on the S8.

The active suspension on the A8 brings predictive functionality, as well as curve tilting as the vehicle is driven through corners. This is done by raising the side of the car on the outside of the bend and lowering the inside, enabling a tilt of up to three degrees. 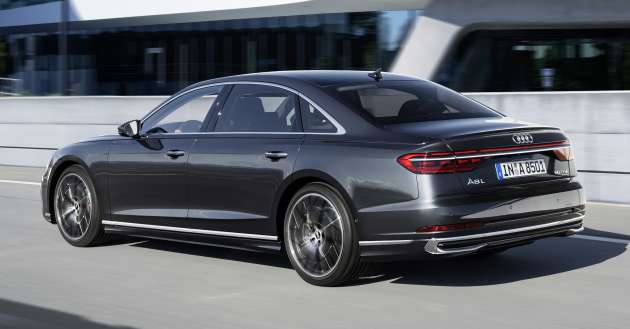 In Comfort Plus mode in a straight line, the predictive active suspension also compensates for pitching movements, while the car lowers itself by 50 mm to aid occupant entry and egress. In terms of rolling stock, the facelifted D5-generation A8 gets wheels ranging from 18 to 21 inches in diameter, including six new designs from Audi and Audi Sport. Upper-end versions such as the S8 can be optioned with carbon-fibre ceramic brakes.

Three driver assistance systems packages can be specified in the D5-generation A8 facelift, comprised of the Park, City and Tour packages. In addition to the Audi pre sense basic and pre sense front safety systems, the Park package brings remote park assist plus which can remotely manoeuvre the A8 into and out of parallel and perpendicular parking bays. This can also be done with the driver outside the vehicle, says Audi.

Given its limousine role, the A8 continues to be offered with several rear seat configuration options, including the relaxation seat setup in the second row of the long-wheelbase A8 L. This configuration brings numerous adjustment options as well as a footrest deployed from the front passenger seat, and which comes with heating and massage functions.

These can display content from the passengers’ mobile devices as well as from online-cast audio and video from streaming platforms or media libraries. In terms of audio, the flagship specification comes courtesy of a Bang & Olufsen Advanced Sound System packing a 1,920-watt amplifier for 23 speakers, offering three-dimensional sound for the rear passengers.

In terms of interior upholstery, Valetta leather is standard specification, while Valcona leather can be optionally specified and in a new leather colour; cognac brown. Joining the D5 A8 facelift as new equipment is Dinamica microfibre trim for the door panels, which can also be optioned on pilar trim and roof lining.

Additionally, there is the option of Audi design selection trim in pastel silver, or S Line specification interior in black, merlot red, or cognac, in addition to several leather packages and equipment from the Audi exclusive range. An optional air quality package adds an ioniser and fragrance dispenser.

The facelifted A8 range is joined by the A8 L Horch, a particularly luxurious variant for the Chinese market. This measures 5.45 m long, or 130 mm longer than even the already long-wheelbase A8 L, according to Audi. Occupants of the A8 L Horch will be treated to expanded diamond-quilted trim, embossed logos in the cushions and deep-pile carpet mats. 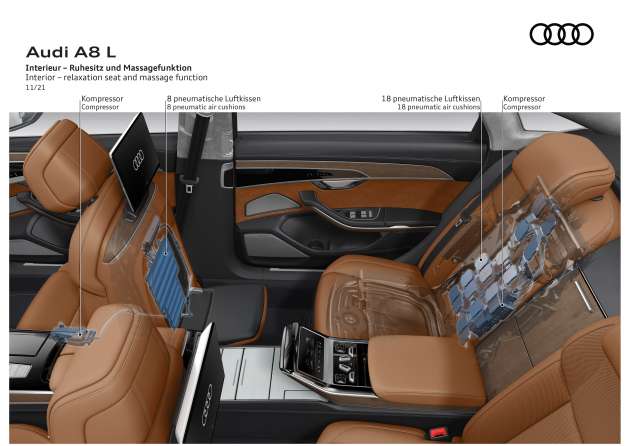 Outside, the Horch is distinguished by a special grille design with vertical braces. Further exterior embellishments include chrome on the mirror housings, a Horch-specific rear light signature, a larger panoramic roof, badges, a C-pillar ‘Horch’ emblem, H-crown rim design and a two-tone exterior paint option, in addition to the relaxation seat package as standard.

Meanwhile for the regular A8 line, the standard palette is comprised of 11 colours including new ones such as metallic District Green, Firmament Blue, Manhattan Grey and Ultra Blue. New matte finishes for the A8 include Daytona Grey, Floret Silver, District Green, Terra Grey, and Glacier White, while the Audi exclusive programme offers the option of specifying a colour of the customer’s choosing.