2021 Nissan Ariya electric SUV to be revealed on 15 July

Nissan has teased an all-new electric SUV called the Ariya in an online video ahead of the crossover’s official debut on 15 July.

Previewed as a concept car at last year’s Tokyo motor show, the Ariya will sit above the Leaf in Nissan’s electric car line-up as a battery powered alternative for the Qashqai and X-Trail. This latest teaser clip gives us an official glimpse of what to expect when the covers come off.

It’s clear that this family crossover will usher in a brand new design language for Nissan, and glimpses in the short video clip posted by Nissan confirm that patent renderings leaked earlier in the year were accurate.

The renderings show us that while some features are carried over from the Ariya concept other details have inevitably been tweaked for production. The headlight and grille treatment remains faithful to the concept, but design details around the bumper have been altered.

Likewise, the overall profile looks fairly similar, though details such as the charging port in the front wing have been integrated in a more simple way. Expect LED lighting tech to feature, and the concept’s full-width rear light bar is likely to make it onto showroom models. 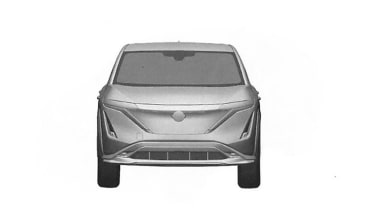 At 4,600mm long, the Ariya concept is just 40mm shorter than the current X-Trail, but its 2,775mm wheelbase is 75mm longer. That should enable the production model to have a huge amount of interior space – made all the more possible thanks to a completely flat cabin floor granted by the packaging benefits of an electric platform.

The move to electrification has also allowed Nissan engineers to move items like the air conditioning unit – usually stored behind the dashboard in a combustion car – under the bonnet instead, enabling a more open space for front seat passengers.

The final version of the Ariya is set to ride on the CMF-EV platform developed within the  Renault-Nissan-Mitsubishi alliance; the same underpinnings set to be used by an all-new Renault electric SUV previewed in our exclusive images.

Details of the production models drivetrain are still to be confirmed, but the concept used a twin-motor layout (one motor for each axle to give four-wheel drive). Nissan’s previous all-electric IMx concept was claimed to offer 429bhp and a range of 373 miles. It’s likely that multiple battery sizes and powertrain options will be offered, however, in order to keep the starting price competitive with rivals like the Volkswagen ID.4 and beneath the £40,000 mark.

Official prices and release dates are still to be confirmed, but like its Renault stablemate, the Ariya is likely to go on sale mid-to-late 2021.

What do you think of the Nissan Ariya? Let us know in the comments below…