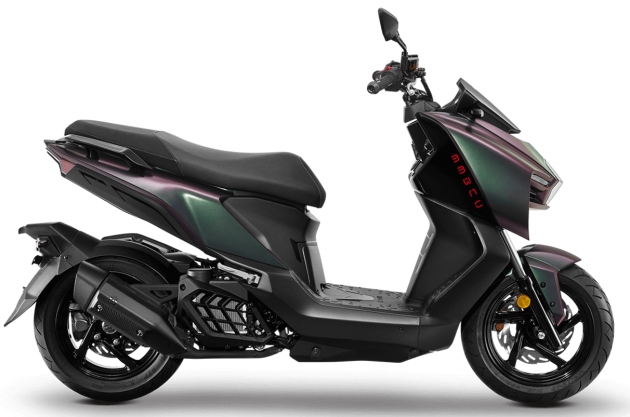 Entering the Taiwan market is the 2022 SYM MMBCU scooter. If you’re wondering about the strange name, the first three letters in MMBCU refer to the Mamba snake of Africa, while the ‘C’ and ‘U’ mean “Crossover” and “unique”.

A four-valve, liquid-cooled, single-cylinder engine displacing 158 cc powers the MMBCU, with power going through a CVT gearbox and belt drive. Power futures were not disclosed but going by similarly engined scooter models in the SYM range, it is estimated the MMBCU will put out 15 PS and 14.6 Nm of torque.

Although it carries the Crossover moniker, along with the image it is intended as a challenger to the Honda AVD160, the MMBCU still resembles a “standard” scooter. This includes a 120/70 sized front and 130/70 rear tyre on 13-inch wheels shod with road tyres.

Other modern riding conveniences include LED lighting throughout along with and LCD instrument panel. Aside from that, SYM has also equipped the MMBCU with two-channel Bosch ABS as well as traction control which is referred to as Tracking Anti-Skid System.

Other details include an overall weight of 136 kg, engine stop-start, wide floorboard and 28-litre under seat storage space. Suspension is done with telescopic forks in front and monoshock in the rear, while single hydraulic discs brakes do the stopping.