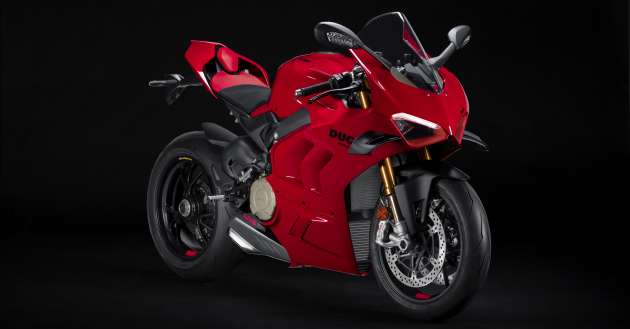 Ducati has premiered the 2022 Panigale V4 superbike with its latest batch of updates, bringing improvements in the areas of aerodynamics, engine, chassis and electronics. This is aimed at offering even greater on-circuit performance by being “more intuitive and less tiring” for professionals and amateurs alike, says Ducati. This follows on from the first update in 2020, after the V4 superbike was introduced in 2018.

The Euro 5-compliant Desmosedici Stradale engine continues to be of a 1,103 cc displacement as before, though now brings an increased exhaust silencer diameter to 38 mm for reduced backpressure, while a smaller-displacement oil pump works with a revised oil circuit to reduce power losses in the engine. These improvements yield and additional 1.5 hp over the outgoing version to 215.5 hp at 13,000 rpm, while peak torque is 123.6 Nm at 9,500 rpm.

This is paired to a six-speed gearbox with a slipper clutch and Ducati Quick Shift Evo 2 (up and down quickshifter), where the gearbox itself is new and uses longer first, second and sixth gear ratios. First is 11.6% longer while second is 5.6% longer, while the longer sixth (by 1.8%) contributes to an increased top speed 5 km/h higher than the current year’s model. 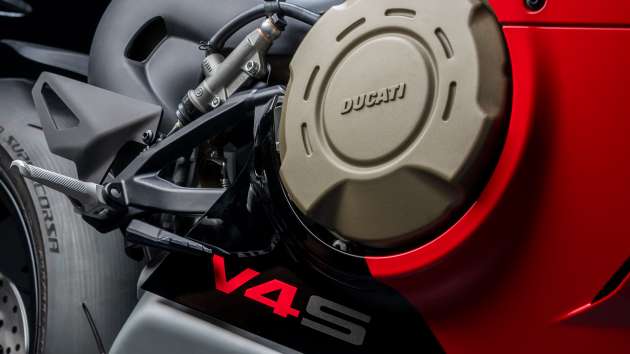 Engine mapping for the 2022 Panigale brings four power modes; Full, High, Medium and Low. Full and Low modes are new; the Full power mode is the sportiest to be applied to a Panigale V4 so far, allowing the full, unfiltered powerband in all gears except first, while High and Medium power modes have been revised with a new ride-by-wire mapping for each gear. Low caps maximum power to 150 hp and gets a softer throttle map for more manageable road riding.

Meanwhile at the track-use end of the scale, the 2022 Panigale V4 can be optioned with a full titanium racing exhaust by Akrapovic that is now of a high-mount exit design, and is now made to comply with the 105 dB noise limit at selected track events; a dB killer can also be fitted to reduce sound pressure level to 102 dB.

This yields a 12.5 hp gain over the standard exhaust assembly for higher peak power and torque figures of 228 hp and 131 Nm respectively, while saving 5 kg. The new high-mount titanium exhaust system complements the existing, more compact full titanium exhaust already in the catalogue, which reduces weight by a further 1 kg and is rated at 109 dB, or 107 dB with the dB killer installed.

The 2022 model year update brings ergonomics revisions, which are aimed at making the Panigale V4 easier to hang on to and thus easier for the rider to maximise the bike’s on-circuit performance. The fuel tank has a new shape to allow riders of all sizes to be more able to anchor on during braking, while also enabling a better full-tuck position to further aid airflow.

The contact area for the arms have also been improved for when the rider hangs off mid-corner. Meanwhile, the seat has been redesigned to be flatter than before to be easier for the rider to move around, while at the same time reduce the tendency to slide forward under braking.

Aerodynamics have been improved for packaging as well as cooling, the former by a new double-profile wing design that is now thinner and more compact while producing the same vertical load downforce of 37 kg at 300 km/h, says Ducati. Meanwhile, the lower fairing gets redesigned vents to improve cooling.

Suspension on the 2022 Panigale V4S is updated to now comprise of a new Öhlins NPX 25/30 pressurised 43 mm-diameter front fork, which also gets an additional 5 mm of travel for 125 mm in total, while the rear continues to use an Öhlins TTX36 shock, both adjustable for compression and rebound via the Swedish suspension manufacturer’s Smart EC 2.0 electronic damping control units.

The rear end of the 2022 Panigale V4 gets a 4 mm higher non-adjustable swingarm pivot to further improve anti-squat under power. Rolling stock continues to be Pirelli Diablo Supercorsa SP front and rear tyres measuring 120/70 and 200/60 respectively, where the base Panigale V4 uses dual five-spoke aluminium wheels and the V4S gets forged aluminium wheels.

Braking is by a pair of Brembo Stylema (M4.30) monobloc calipers on 330 mm discs in front, and a two-piston caliper on a 245 mm disc at the back, collectively managed by a Bosch cornering ABS system.

Instrumentation has also been updated for the 2022 Panigale V4, where a redesign has been aimed at making the contents of the display easier to read. There is now a new Track Evo layout added to the exising Road and Track settings for the display, where the new layout relocates the tachometer to a horizontal bar graph along the top of the screen for best visibility.

On the right-hand-side portion of the display are four segments of different colours, each denoting an individual electronic rider aid parameter, namely DTC (traction control), DWC (wheelie control), DSC (slide control) and EBC (engine brake control). These segment light up individually to let the rider know which parameters are being activated, while the gear change indicator is a green LED positioned to the left.