Home » Auto News » You Can Buy This Ready-to-Race Drag Strip in Kansas for $1.5 Million

You Can Buy This Ready-to-Race Drag Strip in Kansas for $1.5 Million

Holiday shopping left til the last minute can be a nightmare. Sometimes you just run out of time; others, the recipient might be hard to figure out a gift for, especially if they have more novelty socks than they can wear. Should you be shopping for a car enthusiast, though, and have seven figures to spend on a whim, I’ve got a recommendation: Buy them the whole dang drag strip that’s for sale out in Kansas.

Mid America Dragway, which has apparently been operating since the mid-1960s, has been listed for sale by its owners on Facebook for the sum of $1.5 million. The strip is located between Interstate 35 and Arkansas City, near the middle of Kansas’ southern state line, and is being sold as a package deal with everything needed to run it as a business. 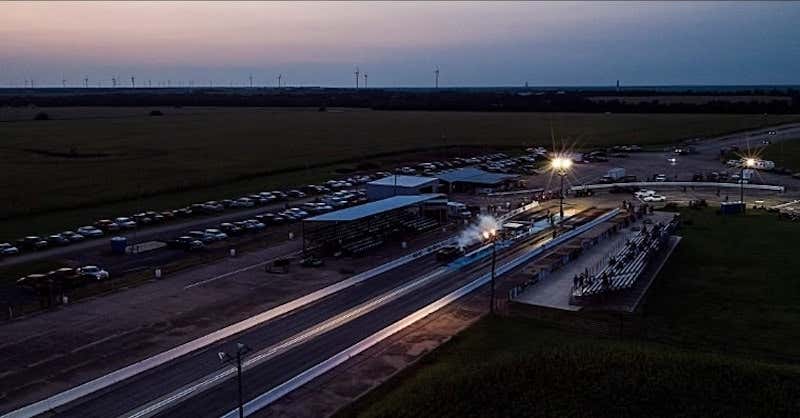 That’d include some 66 acres of land, facilities with climate-controlled bathrooms and concessions, and all the equipment used to maintain the property and run races. Per Dragzine, that means “the timing system, support vehicles and tractor, sprayers, tire-drag, tools,” and so forth. Then there’s the racing surface itself, consisting of a 300-foot concrete launch pad that transitions to tarmac, and is walled in by concrete barriers.

“This sale is being brought on by some health issues, and it has been a difficult decision for our family to make,” stated the track’s owners in the Facebook post announcing the sale. “We will be more than happy to assist any buyer in operating the track for a smooth transition. The main objective here is to pass the torch on to someone else that can run with it. We don’t want to see any interruption in the track being open and functioning. We also want to be able to come and race with you guys, and to also sponsor and help support the track thru our business.”

Per the above, the entire drag strip is listed for sale for $1.5 million, though as it seems to be a profitable business, whoever buys it might recoup at least some of that money over time. As far as investments as gifts go, it’s certainly a more exciting one than a savings bond—and a stabler, less embarrassing one than EV startup stock or an NFT (cope).