Electric vehicles are a much more long-standing tradition of car culture than we often give them credit for. Ask someone the first EV that pops to mind, and the usual responses will be from the past couple of decades—the original Tesla Roadster, perhaps the late 1990s GM EV1, maybe in rare cases the awkward ’70s wedge-shaped Comuta-Car. But well before any of these modern electric cars were dreamt up, there was a battle between EVs and ICE cars that was so fierce it made today’s market look like a church bake sale.

We know how it turned out: The gas stations situated on every highway and thoroughfare throughout the country compared with often pitiful and scant electric charging infrastructure is proof that gasoline won the first battles. But it wasn’t for a lack of effort or well-built cars. 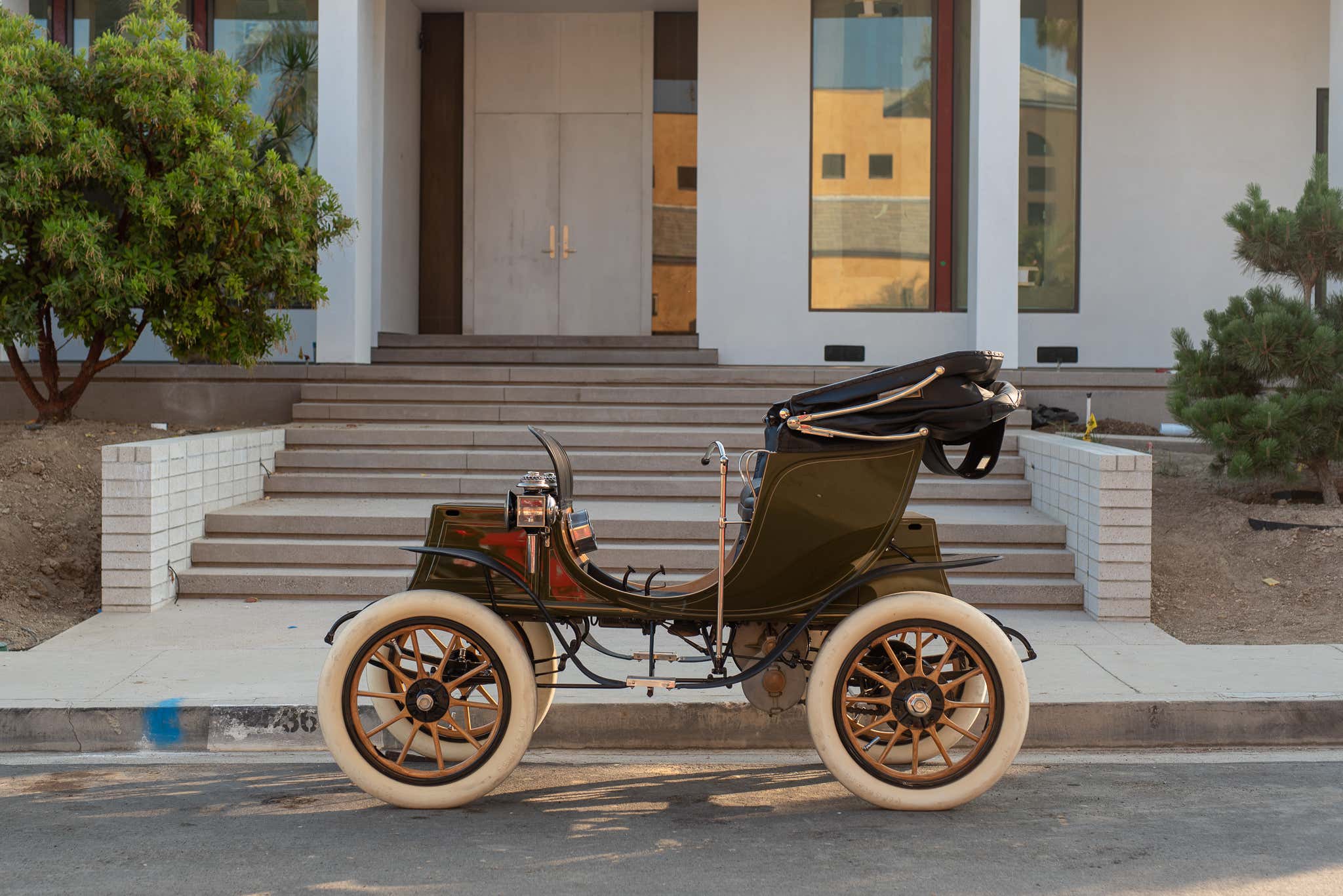 This is a 1908 Columbia Electric Victoria Phaeton. Built by the Columbia Automobile Company, it represents the final glory days for a marque that once was poised to become an automotive Goliath on par with General Motors, and instead ended its history as a bankrupt footnote just four years after this carriage rolled off the assembly line.

It’s rolling, driving proof that there was a vibrant electric vehicle market over a century ago—although it’s more appropriate to call it an electric horseless carriage than a car.

Penthouse to the Pavement

To fully appreciate this car—and understand how a company that was the first to ever sell 1,000 cars in a year, ever became little more than a niche curiosity—some background is necessary.

At the dawn of the 20th century, there existed three options to propel a carriage that wasn’t a horse: steam, gasoline, and electricity. Steam was popular for its familiarity. Steam for power generation had been in use for decades at that point, but steam power requires a massive, high-pressure boiler (known for its propensity to explode), onboard water storage or an expensive and high-maintenance condenser, and immense amounts of time to get a motor actually running. Starting a steam car could take over 45 minutes on a cold day.

Believe it or not, gasoline cars were not much better in the early 1900s. Before the invention of conveniences such as the electric starter (patented in 1903 and implemented for the first time in 1912 by Cadillac) or the muffler (invented in 1899 by Columbia’s own Hiram Percy Maxim, the same man that invented the first working firearm silencers), gasoline-powered cars were extremely dirty, loud, and difficult to operate.

A misfire while hand-cranking could easily result in a broken arm or dislocated shoulder, and even when early internal combustion engines worked perfectly, hand-cranking required enormous amounts of strength and effort to overcome the inertia of enormous pistons and relatively high compression. 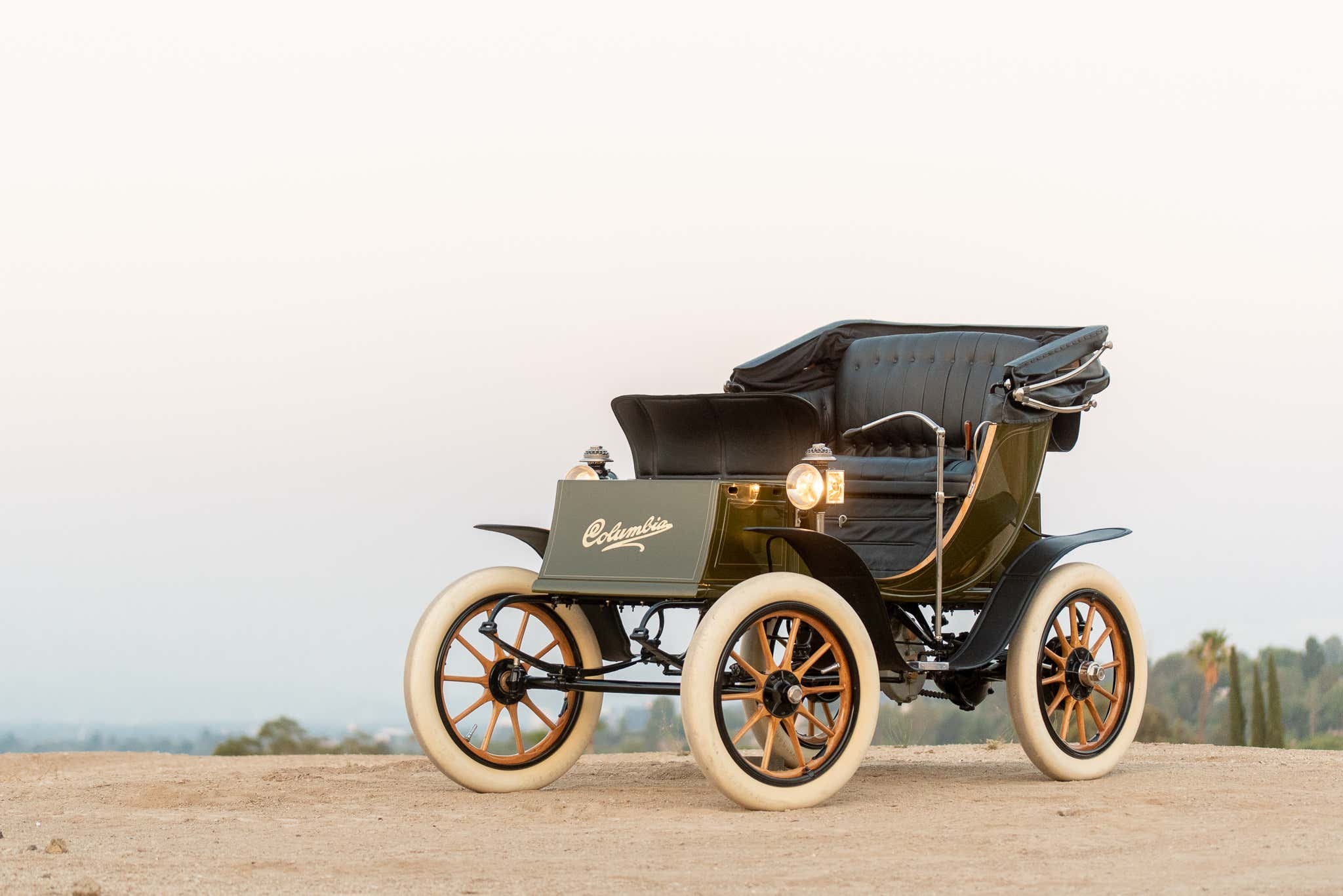 Juxtaposed against these two inconvenient, dangerous propulsion mechanisms, electric cars were massively popular. They benefited from the same attributes that have made them popular in their resurgence in recent times: They promised maintenance-free, silent, clean operation, and a fully contained and reliable source of power that required very little effort to run.

Charging, amazingly, was straightforward as well, with home charging stations available for owners with their own parking spots or “electric garages” that offered vast recharge stations to owners who couldn’t justify their own in-home unit. By 1900, with 4,192 known registered vehicles on the streets of America, over 1,500 of them were early EVs, versus the less than 1,000 internal combustion engine-powered vehicles.

And despite this fiercely competitive nascent market—there were over 2,000 companies building cars in America from 1900 to 1919 in some form—Columbia was an early dominant name. The company originally started when its founder, Albert Pope, turned to automobile production in the early 1890s after making his fortune in bicycle manufacturing after the end of the Civil War. As bicycle demand finally began to evaporate and cars became more commonplace, his company built its first EV prototype in 1896 and was producing roadworthy consumer models by mid-May of 1897.

Accolades quickly followed. By 1900, Columbia set the record for the furthest range ever achieved with an electric car, driving 96 miles on a single charge with an early Runabout model. By 1902, it had become the first manufacturer to deliver over 1,000 cars in a year, beating Oldsmobile to the sales record.

Not content with simply producing and setting records with electric cars, in 1904, its 300horsepower, gasoline-powered car set the record for a Chicago-to-NYC drive in a scant 58 hours, 35 minutes—a 13-hour improvement over the previous record, with an average speed of 24 mph.

If speed wasn’t impressive enough, the people choosing Columbias were. Teddy Roosevelt became the first president with a motorcade in 1902 and rode in a Columbia. Even Queen Victoria purchased a Phaeton carriage for her daughter-in-law, Alexandra of Denmark, to drive herself around the grounds of her sprawling manor. By this point, you’d be forgiven for thinking that Columbia would dominate the American auto industry for decades to come. 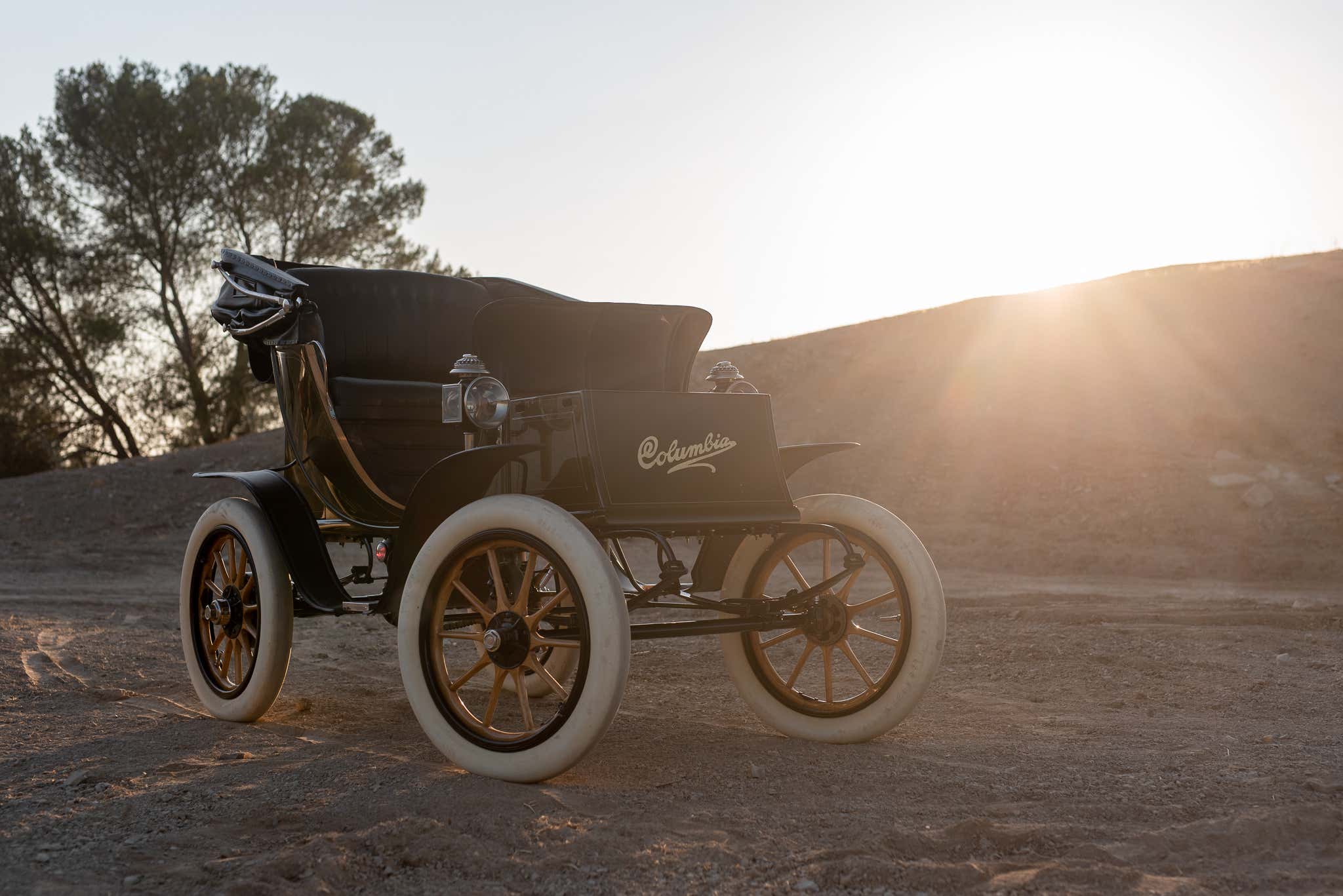 Unfortunately, Columbia started running into financial issues as the decade wore on, spurred on by poor management and an inability to update its models rapidly enough for the quickly changing market. By 1910, the company had fallen into receivership, and by 1913, the holding company it had reorganized under, the United States Motor Company, a conglomerate meant to take on General Motors, had collapsed completely. Columbia never made another car.

How Does This Thing Work?

And so this carriage from 1908 is both a representation of Columbia’s peak—a visionary producer of electric cars, long before the larger market had picked up on that trend—and of its downfall. By 1908, most cars had moved onto a more modern brass-era design, with at least a steering wheel or a windshield of some form, but the Columbia Victoria Phaeton soldiered on with its antiquated carriage format.

And operating this car is unlike any other vehicle I’ve ever reviewed as a result.

The first, and most familiar, part of driving the Columbia is starting it. It has a simple dial in the center of the carriage body, under the bench seat. Insert the key, flip it to “on”, and the car is ready to go. The power is delivered with twin electric motors spinning the rear wheels via a chain drive. The accelerator is controlled by a five-position hand lever controlled with your left hand, and steering is controlled with the chromed steering tiller with your right. Brakes are split into two pedals: One for a pair of rear (open) drum brakes primarily meant to be used for parking, and the other for controlling a brake pad applied directly to the output shaft of the electric motor. 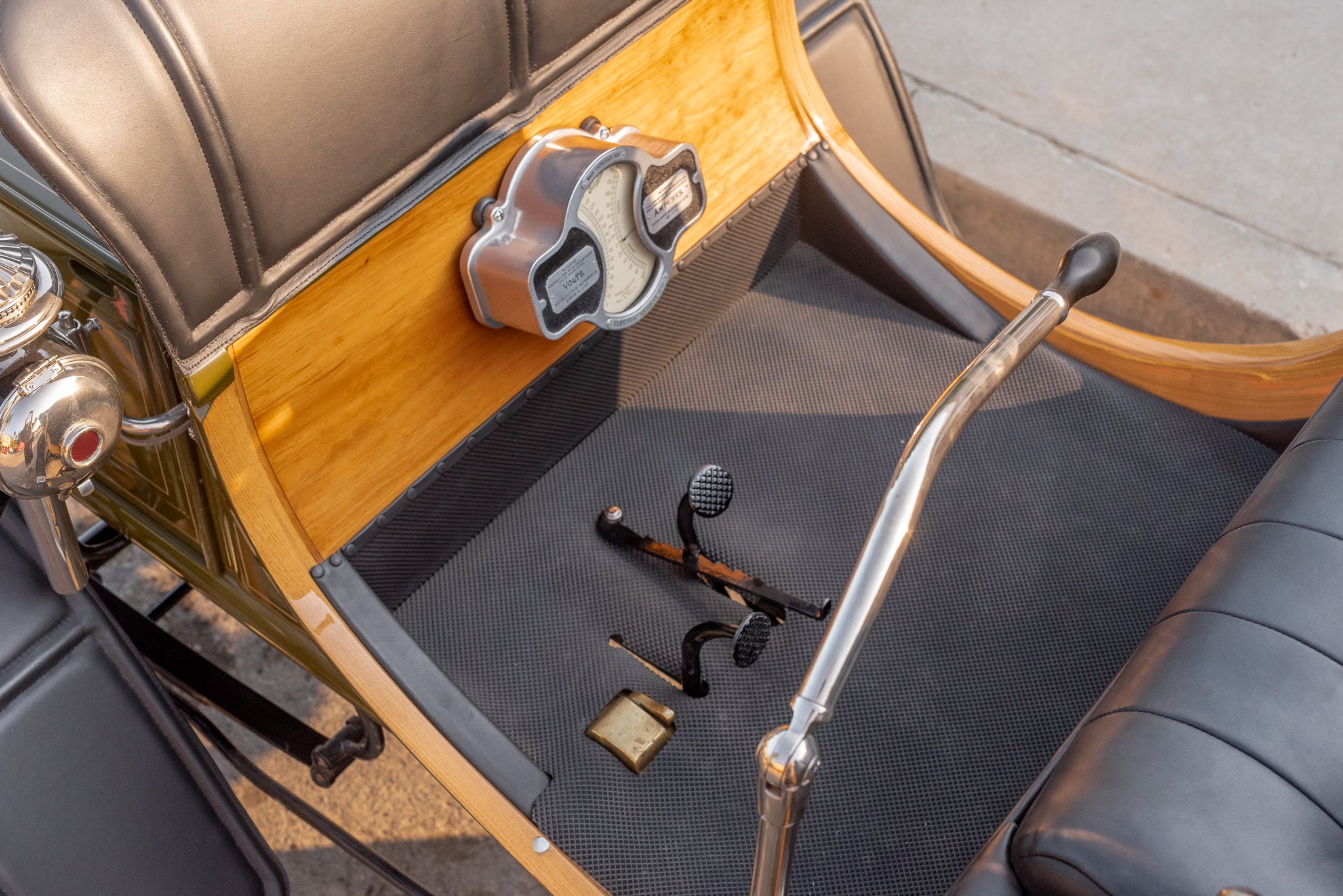 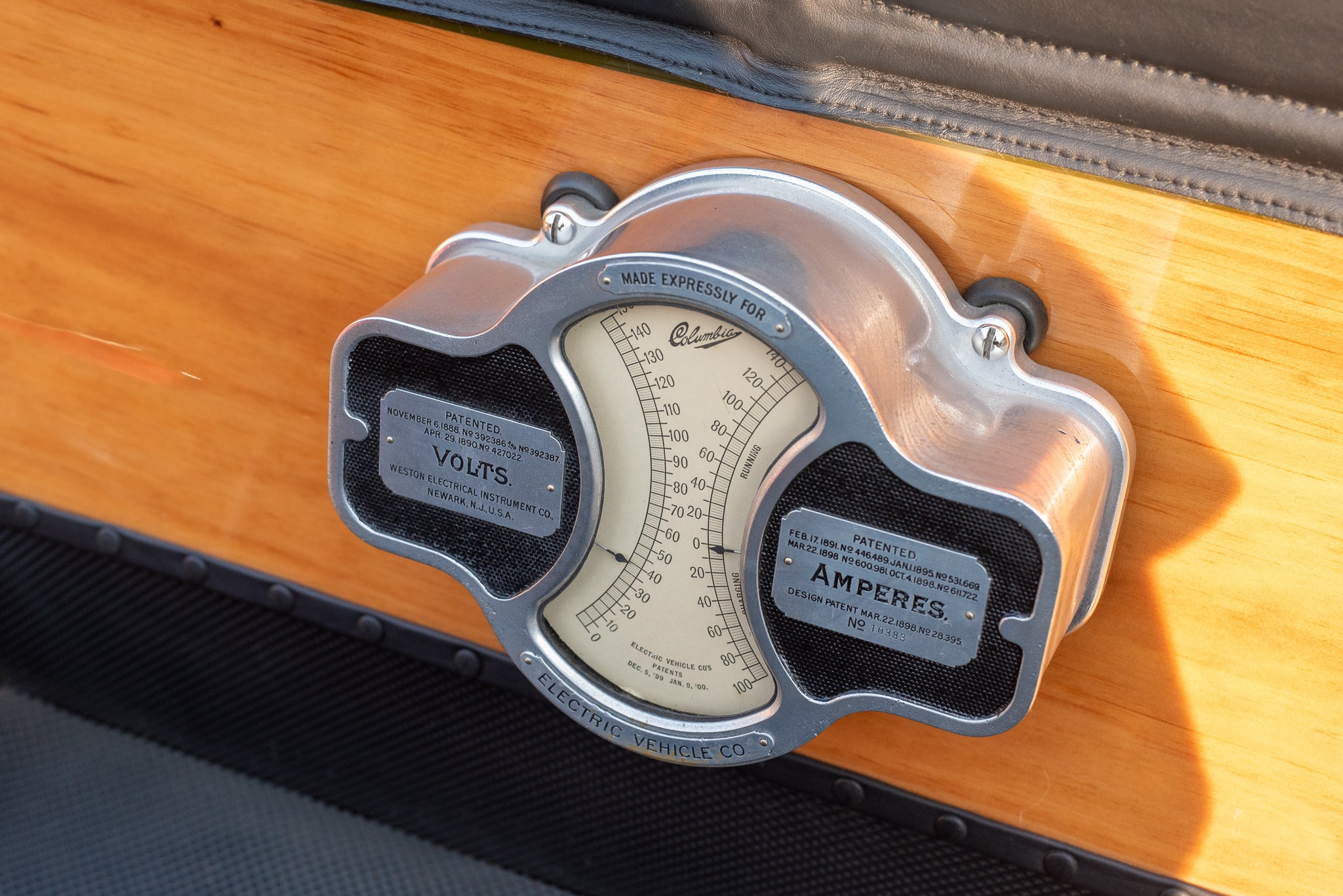 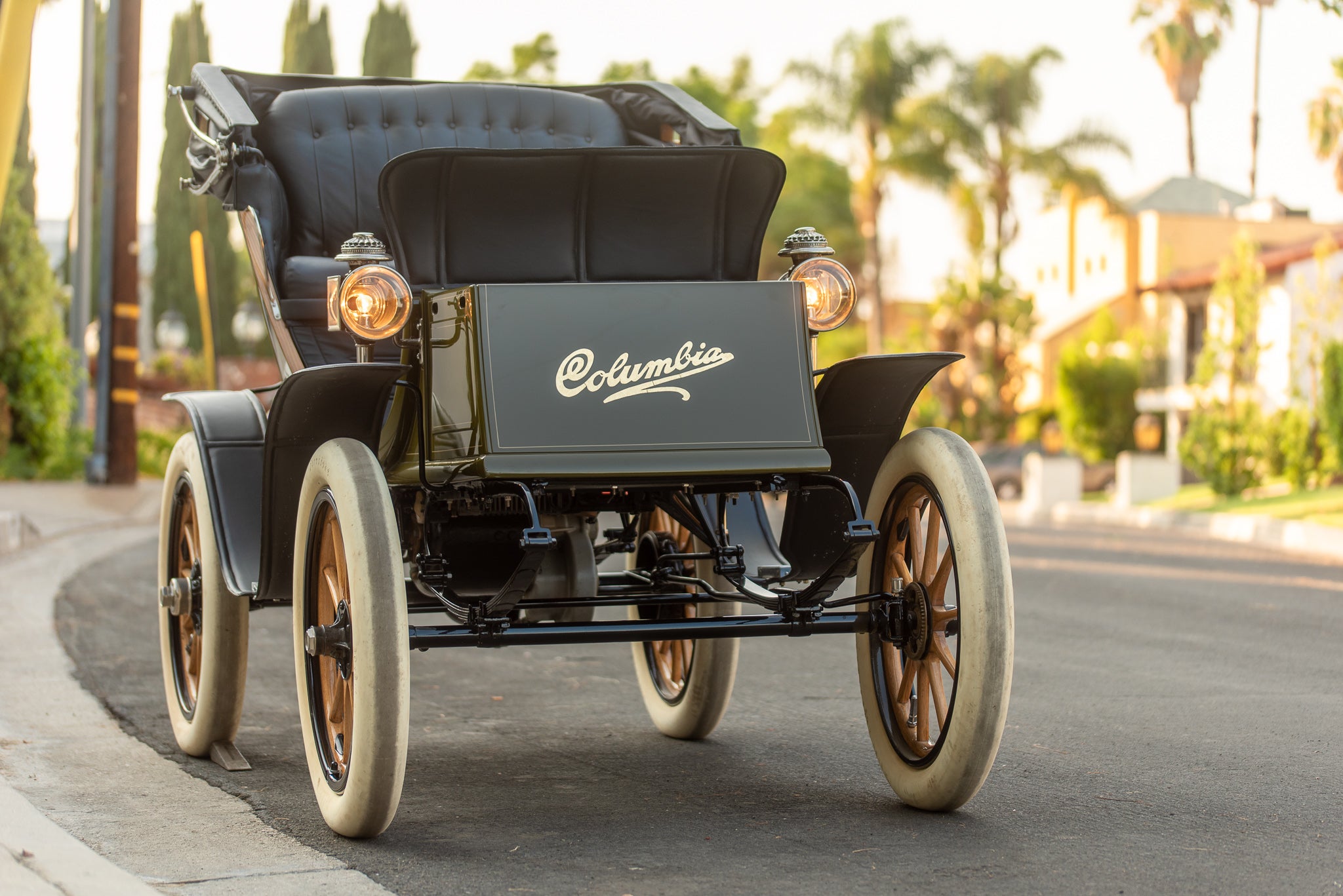 To accelerate, I pushed the accelerator lever to full power and worked the tiller with both hands until speed made steering easier. Because the tiller is hinged for easier entry and exit from the cockpit, and the car is 113 years old, there was a lot of play in the steering, and the tiller and front wheels only vaguely communicated to me where the Columbia was headed.

Once moving, one hand on the tiller was usually enough to keep it straight, although it was extremely easy to overcorrect when on smooth pavement (which, admittedly, wasn’t the main use case for the era, and in my minimal offroading with it, it was much easier to steer). The seating position is absurdly high, thanks to the perch of the bench seat and the 31-inch white rubber tires the whole carriage sits on, and it took me a while to get used to the sensation of driving a carriage that was as tall as it is long. 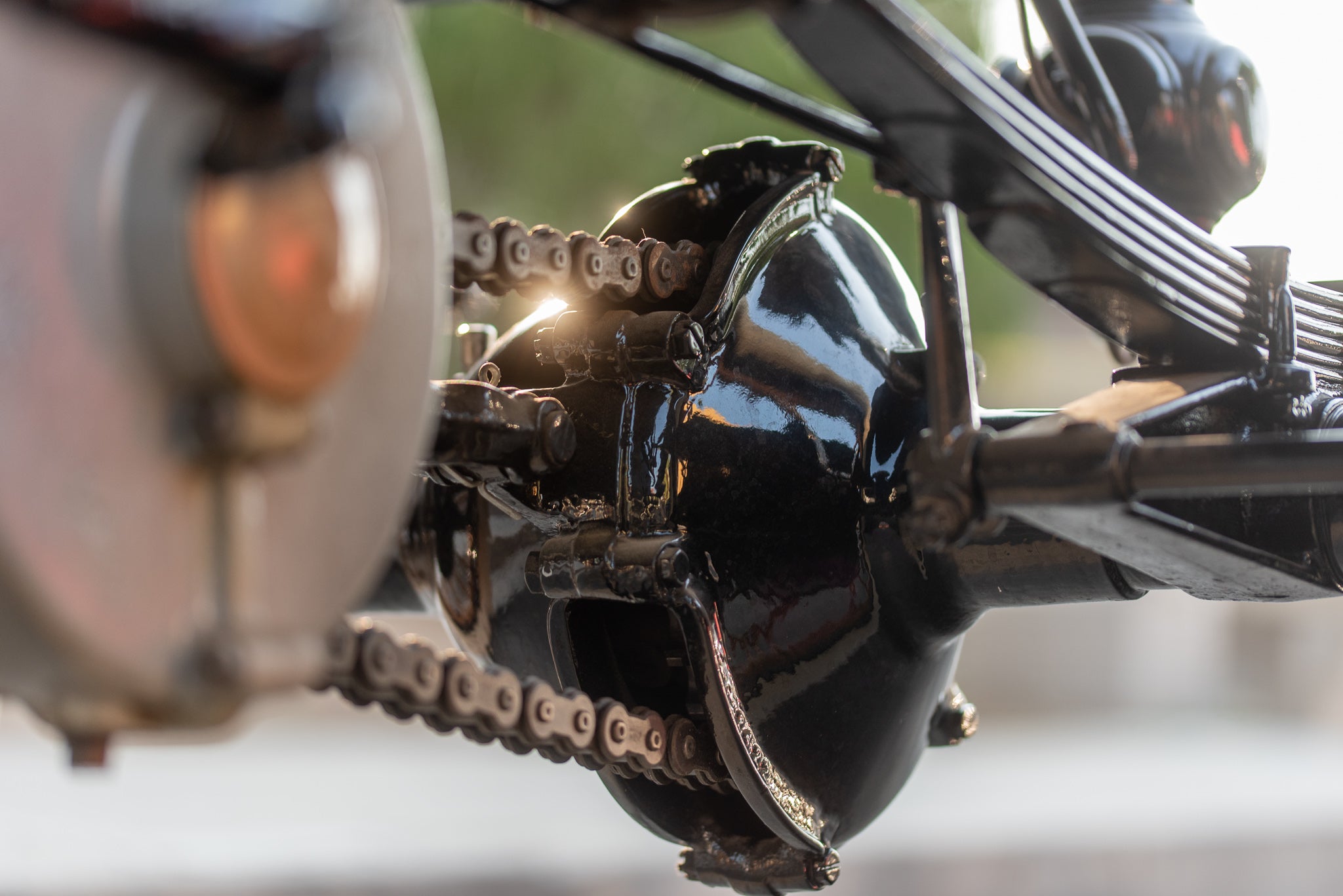 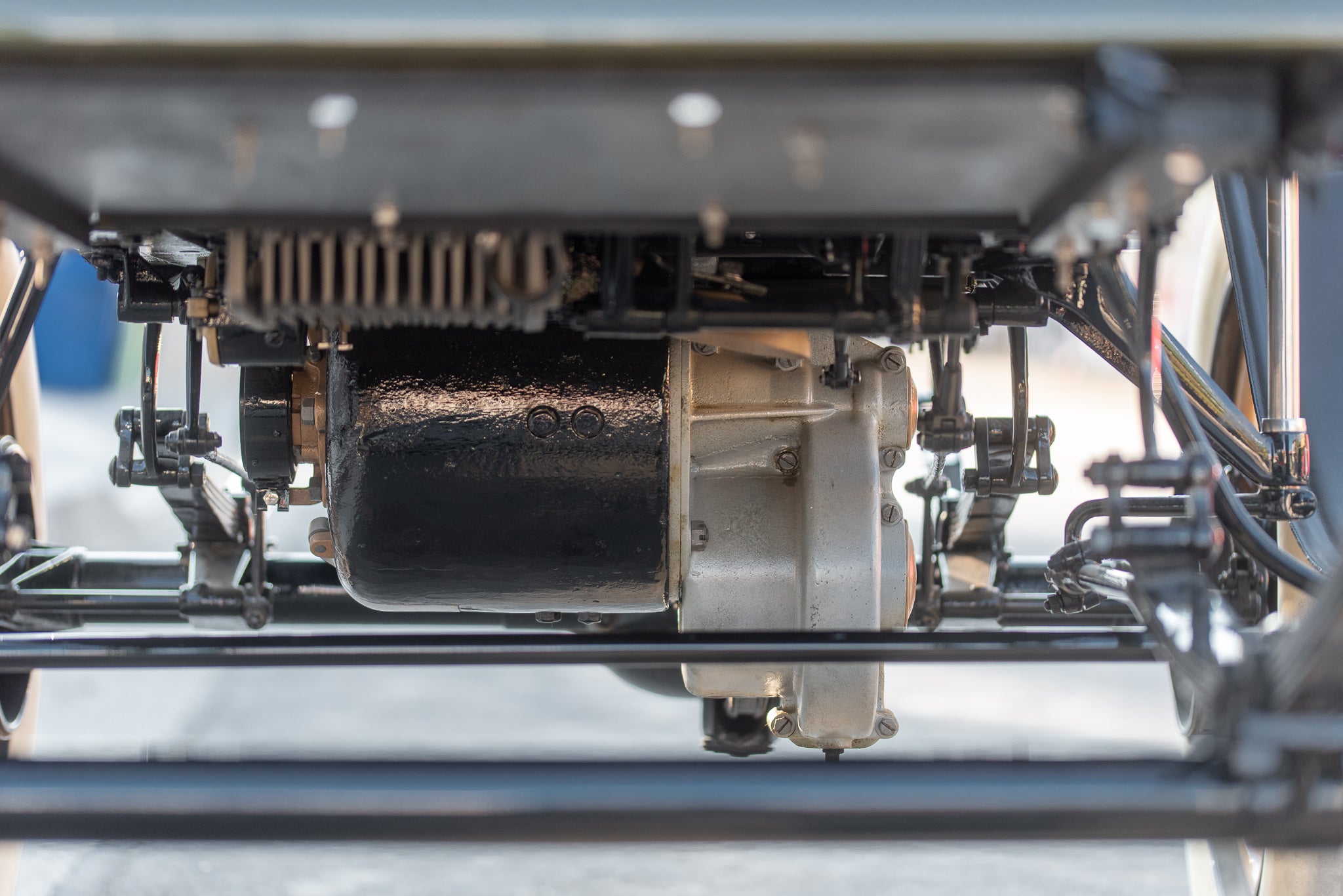 Acceleration is not modern-EV quick, obviously. But it was plenty to get moving altogether too fast for comfort with the accelerator notched all the way forwards. The carriage has a top speed of about 15 mph, but it would be a white-knuckle 15 mph that I didn’t dare hit, thanks in part to the vague steering, absurd ride height, and the twin brakes that are fairly ineffective even in low-speed stops. It drove like I would imagine a hot-rodded carriage would. The drivetrain was superb, but the chassis was just not meant for double-digit speeds because it was originally intended to be pulled by a horse.

However, the real appeal of the Columbia dawned on me after an hour of chugging up and down hilly streets as I searched for good photo backdrops. Unlike most other classic internal combustion engines with multitudes of failure points and temperatures to monitor, keeping the Columbia happy is incredibly straightforward. The “gauge cluster” only has two measurements: amperage and voltage.

The amperage section has both charging and running scales, presumably to help diagnose any charging issues when plugged into early 1900s wiring, but the carriage does not feature regenerative braking, so the arrow stays planted in the running section when cruising around. Voltage functions as a charge indicator, more or less, and I paid as much attention to it as I would a fuel gauge in an ICE car. 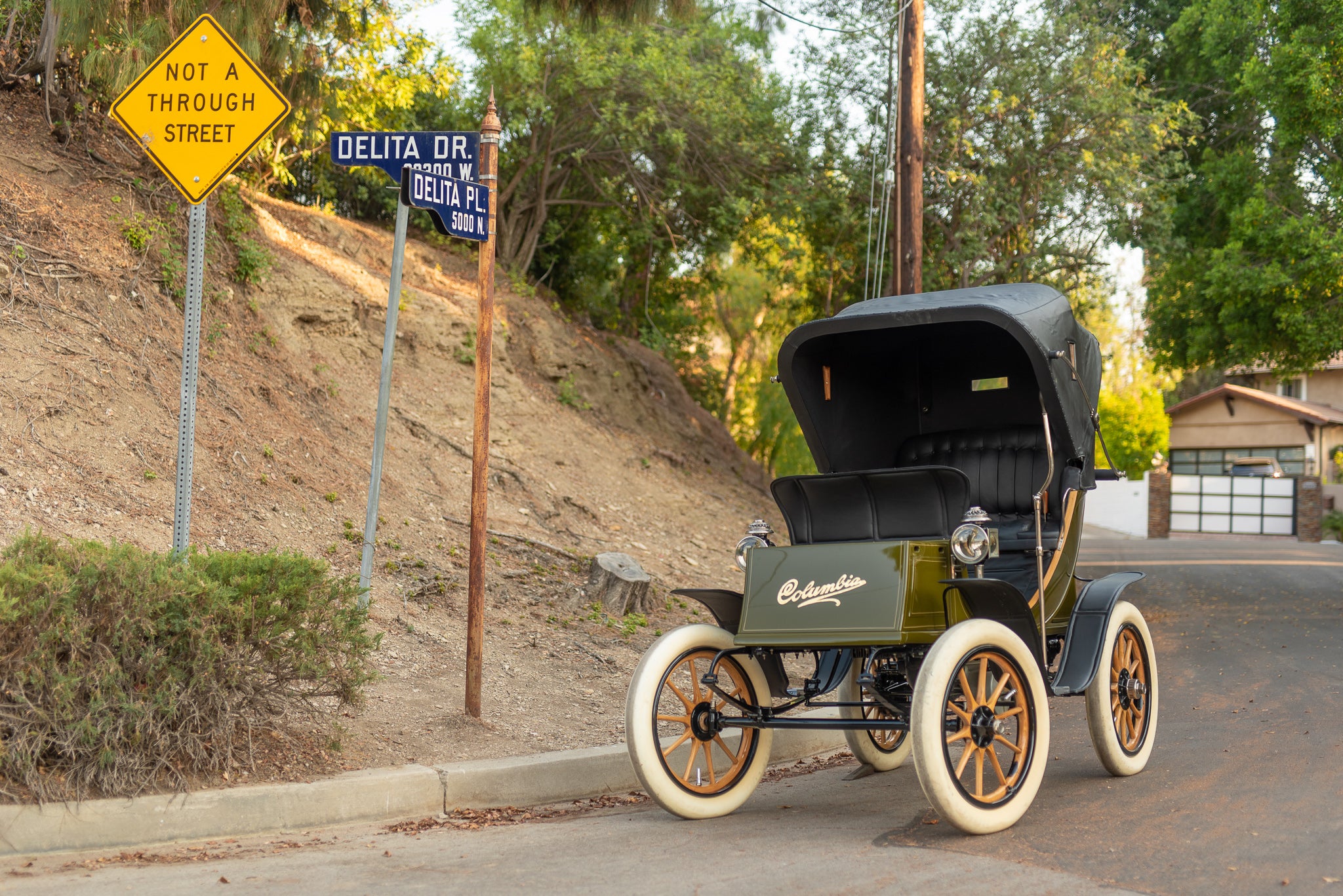 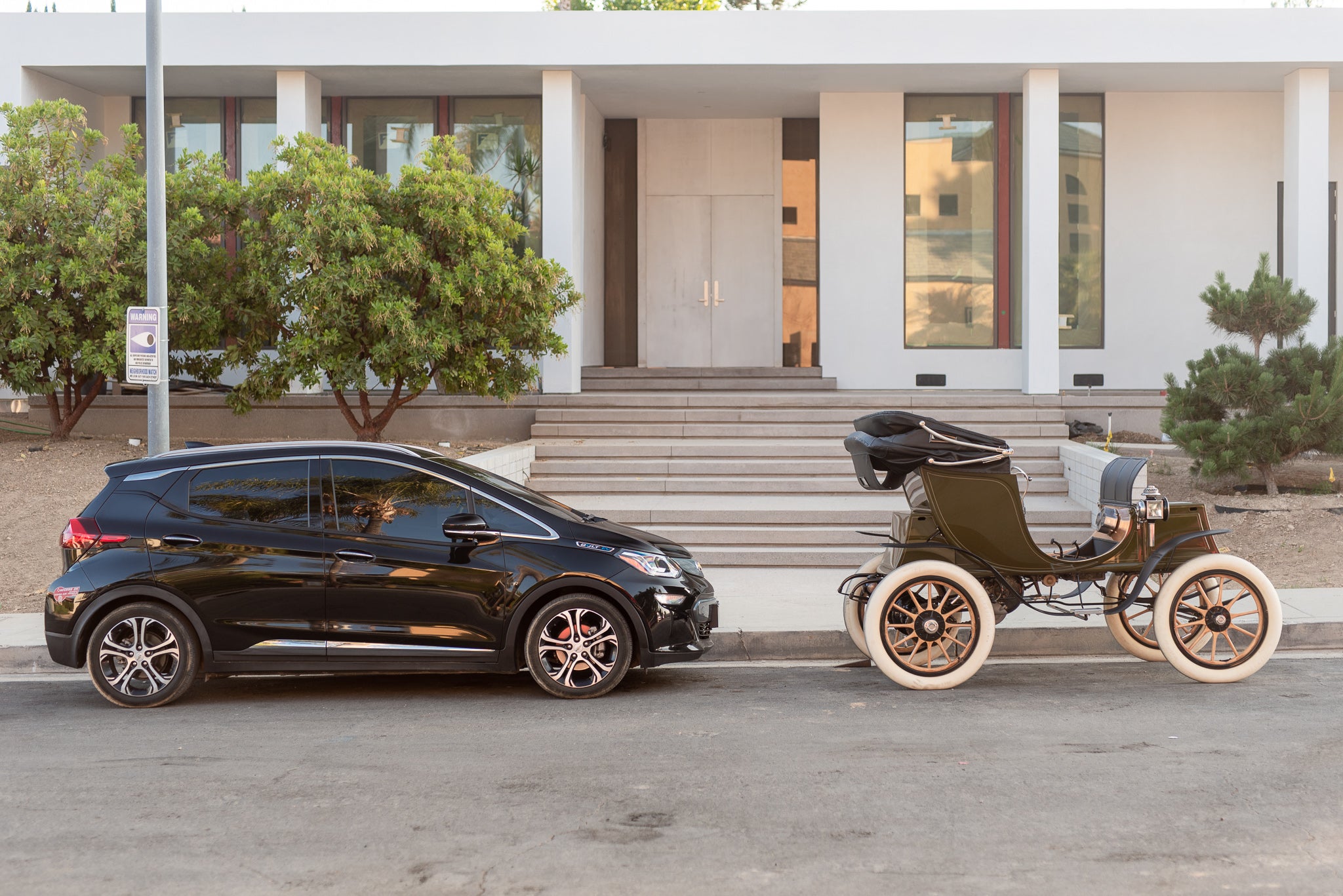 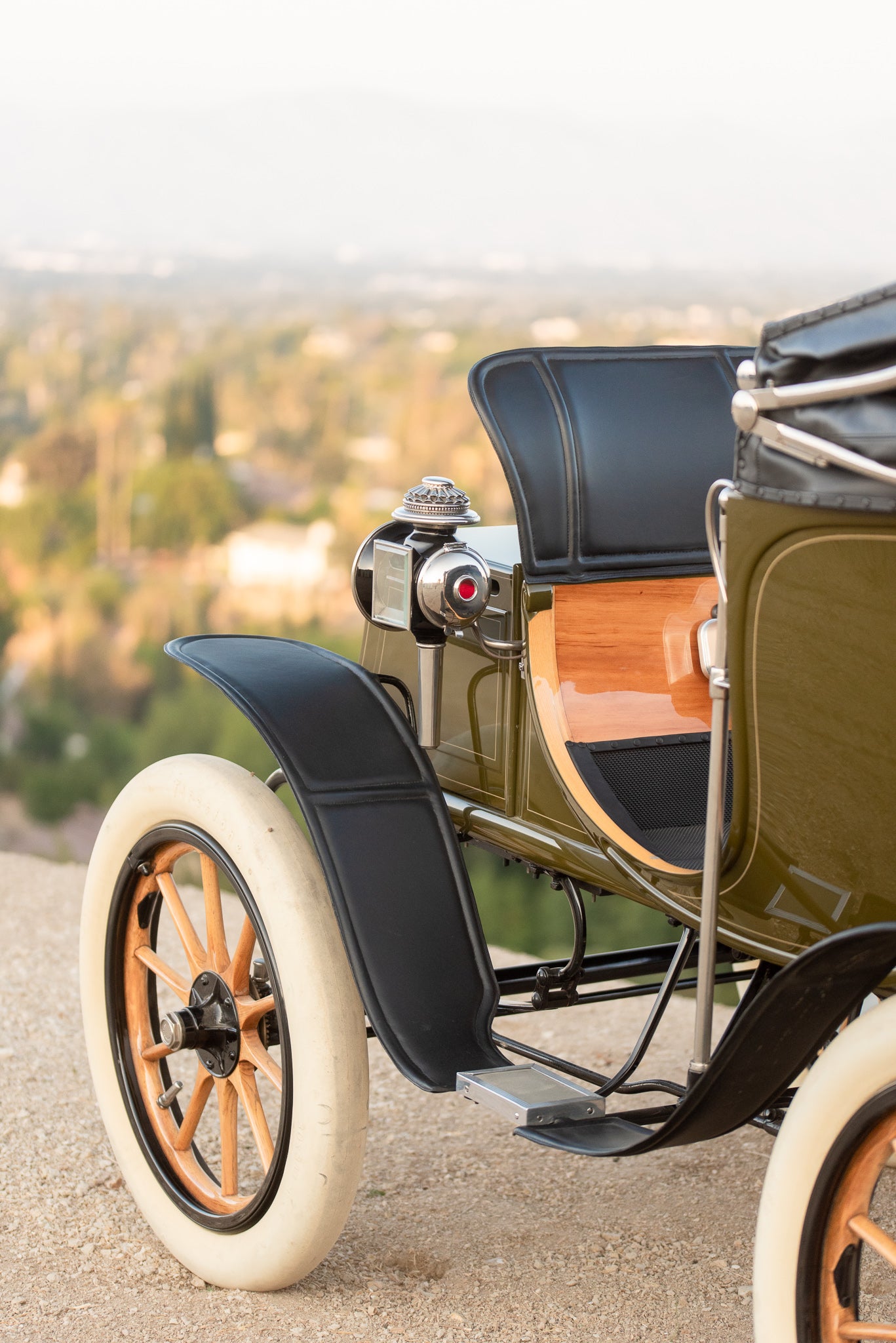 Other than that, there isn’t much else to driving the Columbia, and once the initial strangeness of steering with the tiller had passed, it felt relatively stress-free. Granted, the batteries have been replaced with modern 12-volt car batteries since its last restoration, but the underlying concept and appeal of an EV is still there: You just drive it. I have reviewed cars a full century newer that weren’t anywhere near this reliable or easy to keep running smoothly even for short articles or quick photoshoots, and to have a 113-year-old car run with the quality of a brand-new Leaf impressed me.

And so, despite this beautiful wood-and-leather carriage having long been relegated to a footnote of history, it still resonated with me. The future of the automobile industry is once again incredibly uncertain, and EVs and ICE drivetrains are battling it out once again for supremacy in an ever-more-crowded market full of both fresh upstarts and established giants. The game has changed since the late 19th century, however, and now ICE cars are up against ever-tightening emissions laws and Wall Street investors that would prefer they vanish completely.

But with this new climate comes anxiety about the future of our hobby and car enthusiasm in general as the sunset of gasoline cars appears near. 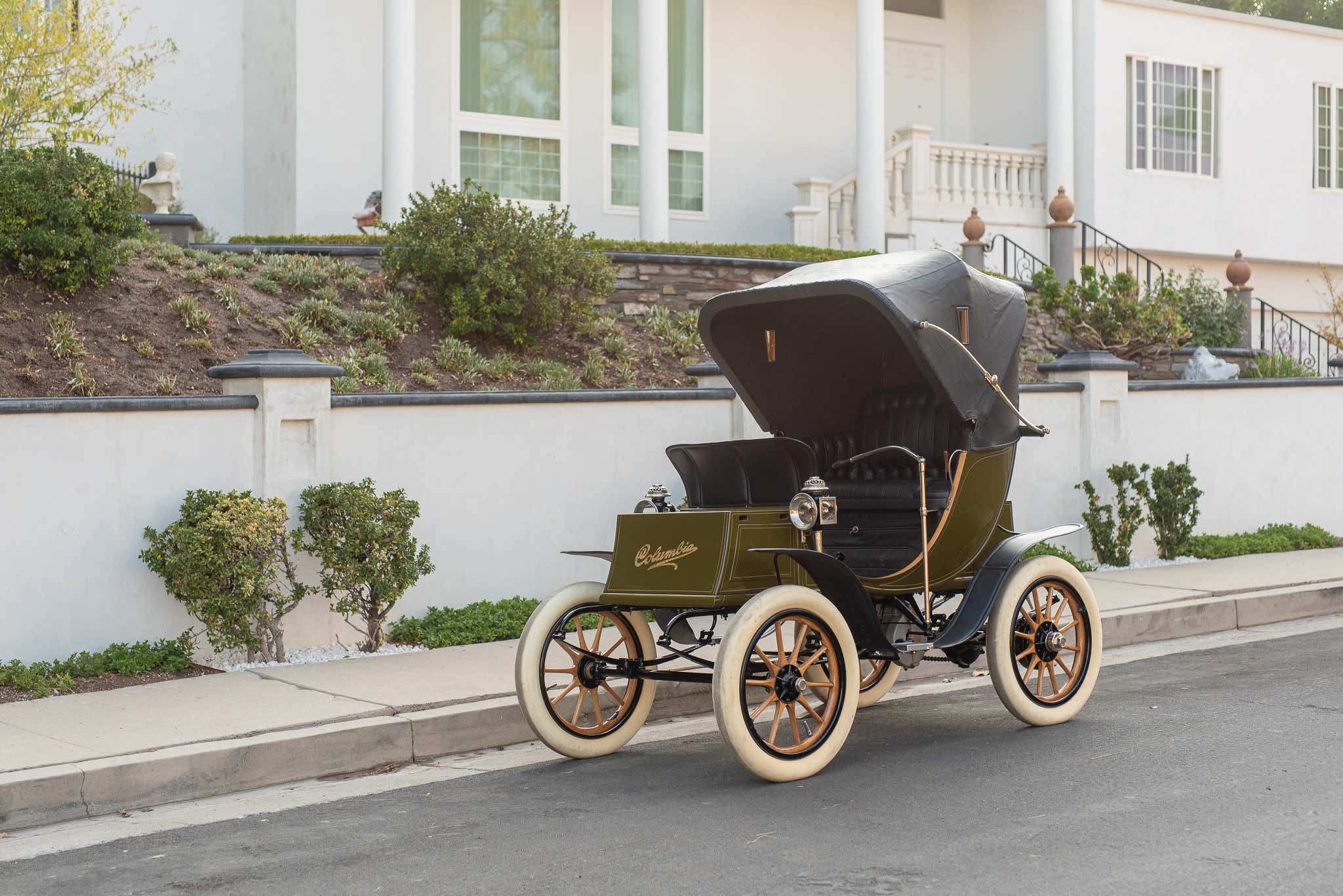 But even in a previously unknown-to-me 113-year-old carriage I steered with a stick and didn’t dare break 10 mph in, I had the time of my life. It reset my understanding of the present and my relationship to the hobby. The propulsion that wins the day and the companies that survive decades into the future won’t erase the accomplishments and progress of today.

No matter what the history books record or which manufacturers reign supreme, we will still have our passion and the joy that comes with it. The hobby will endure. And who knows—perhaps the relics of today will bring joy to 20-somethings 113 years from now.

Thank you to AdyCars for letting us review its Columbia! Got a tip or another older car you want to see us review? Send a note to [email protected]