At around 3500 km, I got a call from them that VW had come up with a fix. They then sprayed three coats of a lubricant over the beadings and said this will solve the issue.

BHPian Osteon206 recently shared this with other enthusiasts.

There is a fix available from VW for the creaking/rattling door issue issue. In the 1000km inspection service, they said adjustments were made in the door, but the issue persisted. Then at around 3500km I got a call from them that VW had come up with a fix. They then sprayed three coats of a lubricant over the beadings and said this will solve the issue. But some creaking persisted, at this point I got a little impatient and insisted they do something better.

Had a word with the service manager, which is when I learnt about the existence of anti-friction strip. So during the second inspection service they assured the issue will be sorted out soon and that their service head was at Pune for training on this.

But what surprised me was that the dealer told me that VW was paying only for 3 doors’ anti-friction strip, I insisted they apply this to all the doors – i was told I’ll have to pay Rs. 400 for the 4th door strip, I just wanted the problem to be sorted and agreed to pay. But this is not cool VOLKSWAGEN INDIA.

What VW should have done, is made a recall and fixed the issue than irritate customers who preferred Taigun over Creta/Seltos and made us go through this ordeal to get this fix.

I felt Rs. 400 is actually the cost of 4 strips. Details about the strip itself – it’s made by Saint Gobain, attaching pics of the fix and the bill for reference.

Following this fix done at 8300km I’ve never faced the creaking issue again. The car has run 11900km so far. 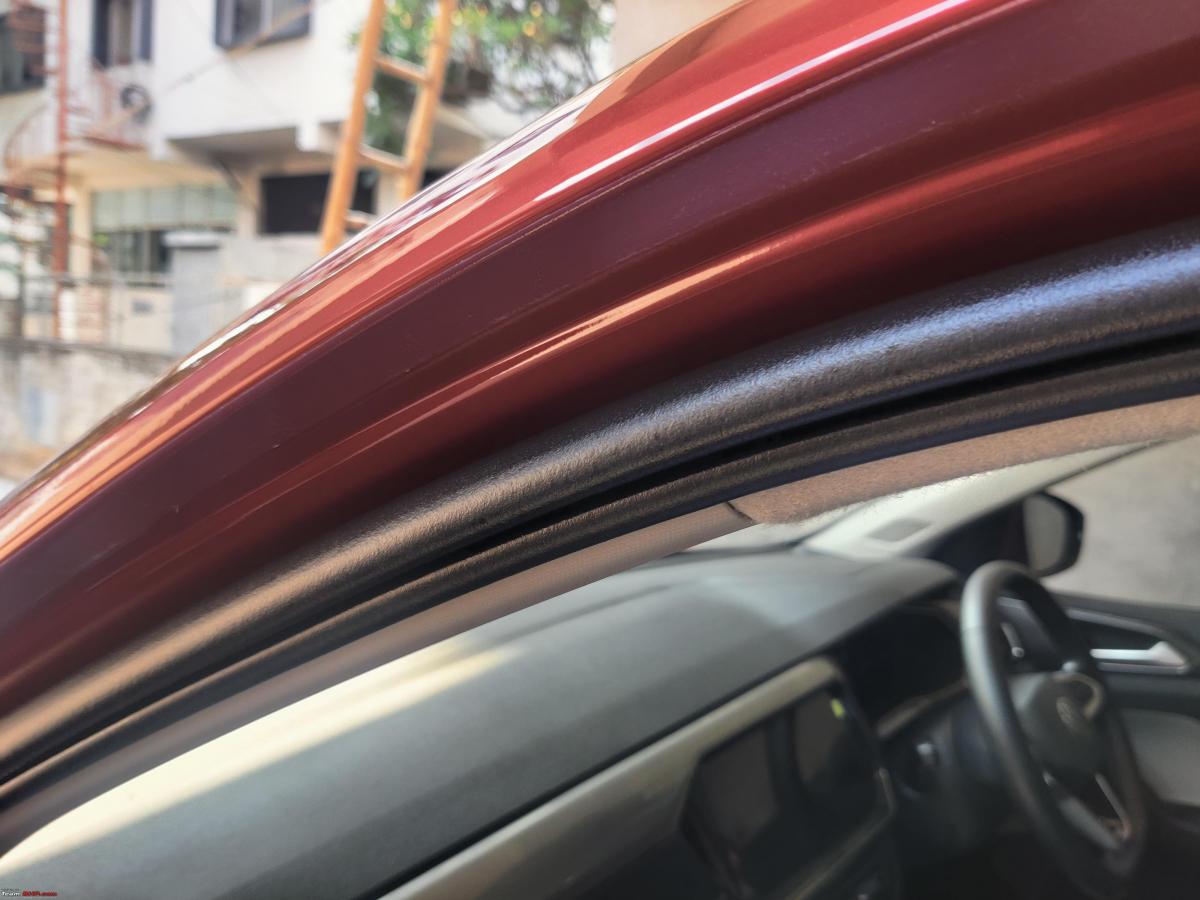 Please bear with the long post, wanted to share my experience with the other issues faced by me and others as well.

But one issue i face is that the one touch up of the driver side window doesn’t work properly most of the time – the window rolls up halfway and rolls back down, whenever this happens it happens twice. The third attempt it stops midway, following which the one touch up just gives way, I’ve got so used to this routine that I don’t even attempt one touch up now.

They have done basic setting of the windows multiple times, other than this issue, I’m just loving the car so I’ve even stopped complaining about this hoping that when the electrically folding ORVM is available anyway the window will get a new motor which should solve the issue.

I’m just hoping someone from VOLKSWAGEN INDIA is reading all these minor issues faced by customers.

As for the AC, I’ve figured out a way of cooling down the car sooner – pop up the sunroof, crack down all 4 windows just a couple of inches down, let the AC be at 22-24 degrees Celcius on auto with outside in circulation, at this point don’t use ventilation of the seats – the car cools down to a not uncomfortable space within 30seconds, i close the windows at this point, within the next 30 seconds the car cools down further and i shut the sunroof as well. The fan blower speed will still be high, so i switch to manual and decrease fan speed to 3 and also switch to inside circulation. After about 2 minutes I then switch to Auto with inside circulation. I’ve got so used to this routine now. As for the efficiency of the AC, i have never felt that it’s not able to cool the car (highest temperature I’ve faced so far is 36.5 degrees Celcius).

As for the mileage – I have a sedate driving pattern, excepting revving on empty roads just to hear the engine roar in the first and second gears occasionally. I always always wait for about 30 seconds after turning on the engine for the rpm to reach from 1500 to 1000, initially i used to wait just 10 seconds after a cold start and journey on, but this gyaan of waiting for the rpm to drop was given by a close friend Dr. KCK from Coorg who owns a Skoda Kushaq 1.0L MT style variant. I get an average mileage of 16-18kmpl (60% highway & 40% city). Within Mysore city I get around 14-16kmpl, on dual carriageway highways where I can’t use Cruise control I get around 17-18.5kmpl. On proper highways with cruise control mileage is sweet at 20-22kmpl. Max I’ve ever got is 23kmpl. I always keep the AC at 24, sometimes higher. I never keep the AC below 22.

Check out BHPian comments for more insights and information