In early 2000, it was clearly a majestic moment when Carl XVI Gustaf, the King of Sweden himself opened Volvo’s cutting-edge crash test laboratory in Torslanda near Gothenburg. What’s known as the Volvo Cars Safety Center is a multifunctional facility allowing engineers to recreate every imaginable traffic situation and accident, testing cars well beyond regulatory requirements. For the last 20 years, following thousands of computer simulations regarding each model, Volvo has crashed on average one car every day, which is a whole lot of high-strength steel bent to teach us more about safety.

Volvo’s lab contains two main test tracks that are 354- and 505-feet long. The shorter of the two is moveable and can be positioned at an angle between zero and 90 degrees, allowing for crash tests at different angles and speeds, or to simulate a crash between two moving cars. Here, test speeds can go up to 75 miles per hour (120 kilometers per hour). On the outside, Volvo performs its famous rollover crashes and run-off scenarios, during which cars get launched into a ditch at high speeds.

Volvo also has a mobile team tracking real-life collisions, and a crane that can drop pre-production cars from up to 98-feet to help rescue services practice cutting through modern Swedish steel. Inside the main hall, an enormous crash barrier is used for testing various frontal, rear and side impacts. Pretending to be an immovable object with its nearly 940-ton weight, it can in fact be moved around if needed with the help of air cushions.

Additionally, Volvo has around two dozen other fixed and movable barriers that are used in crash testing, including a moose-like structure to simulate crashes involving such large animals. People in Scandinavia need to be ready for the combination of loose moose in a snowstorm compromising both traction and visibility. 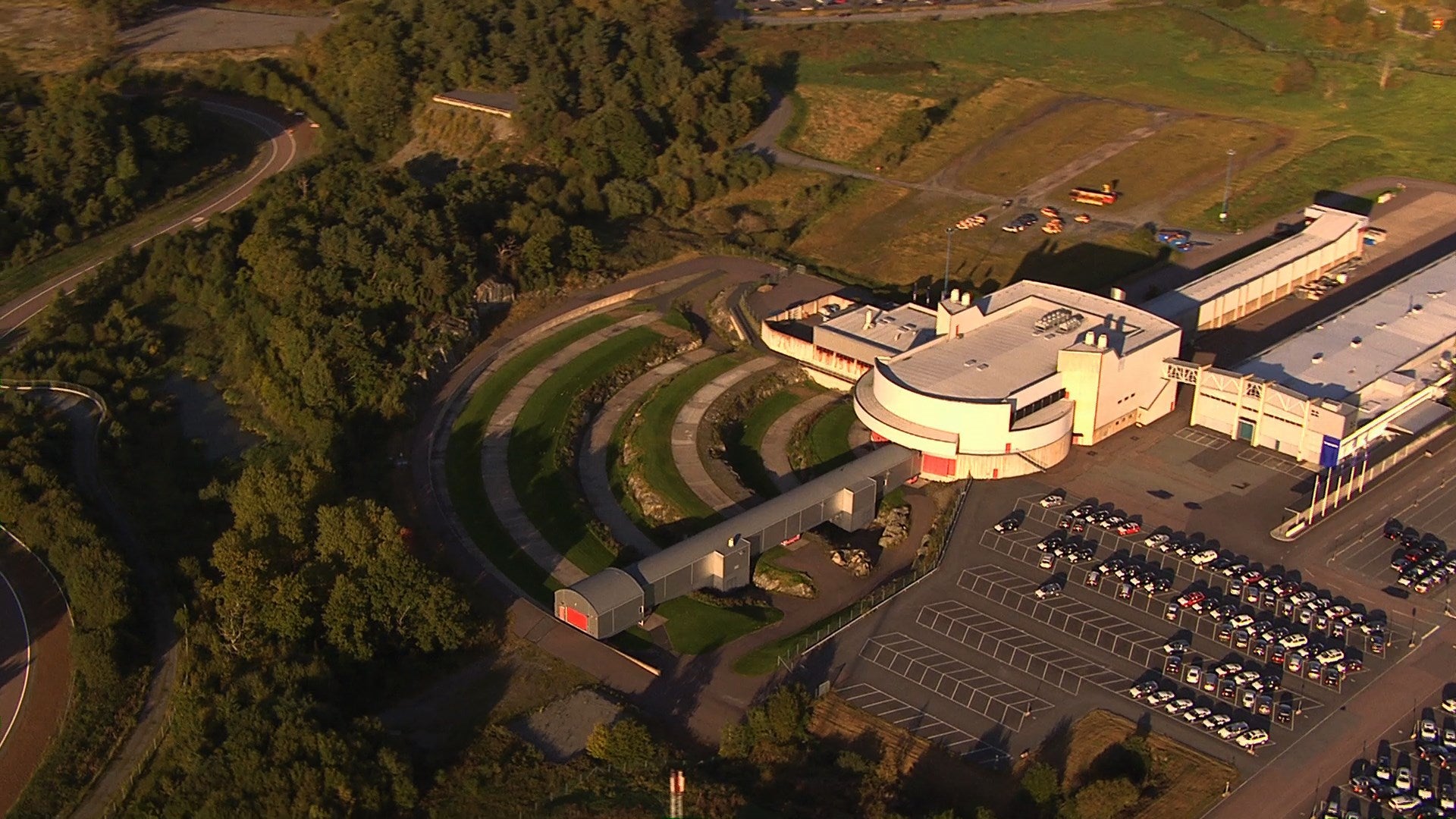 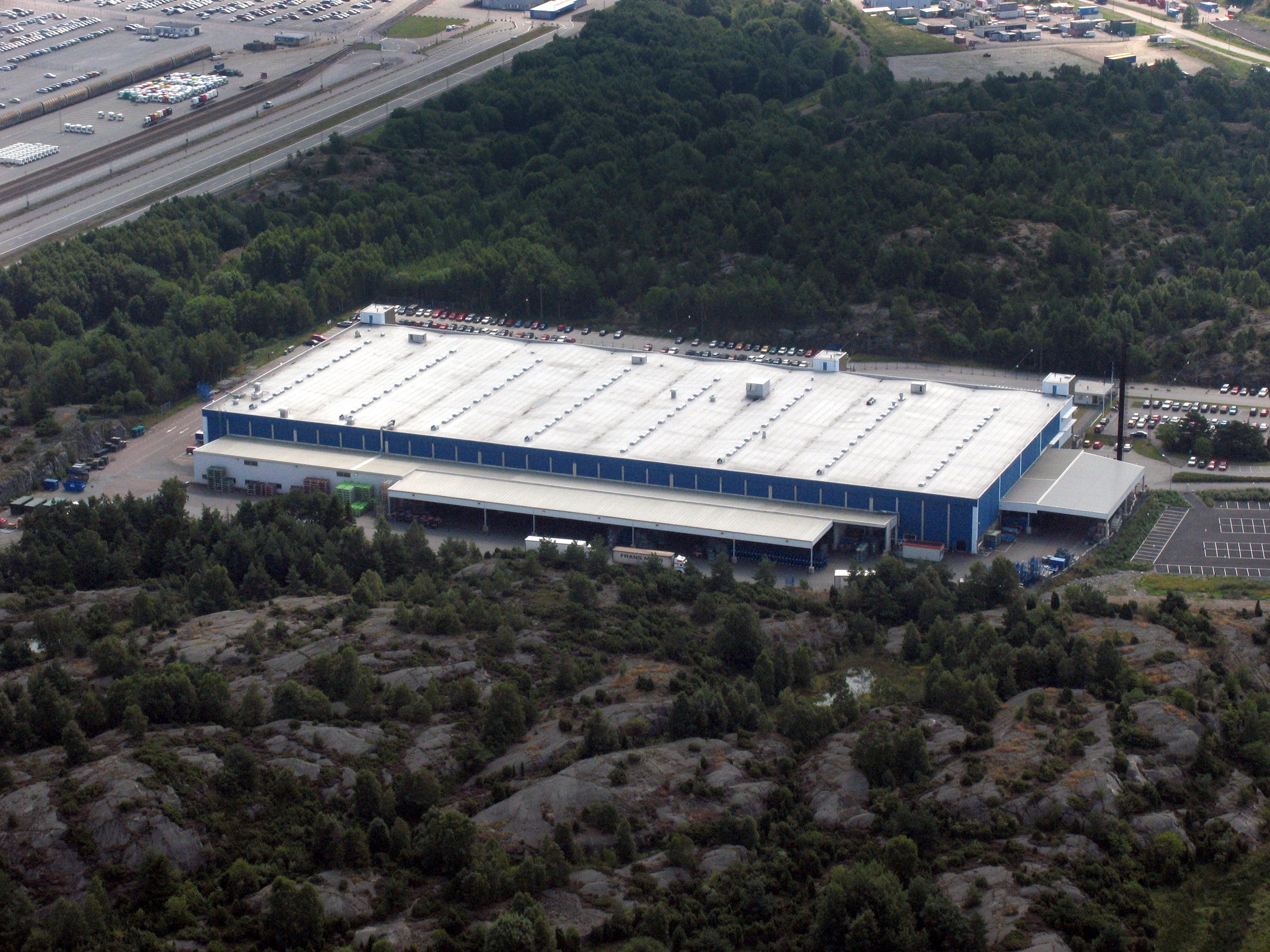 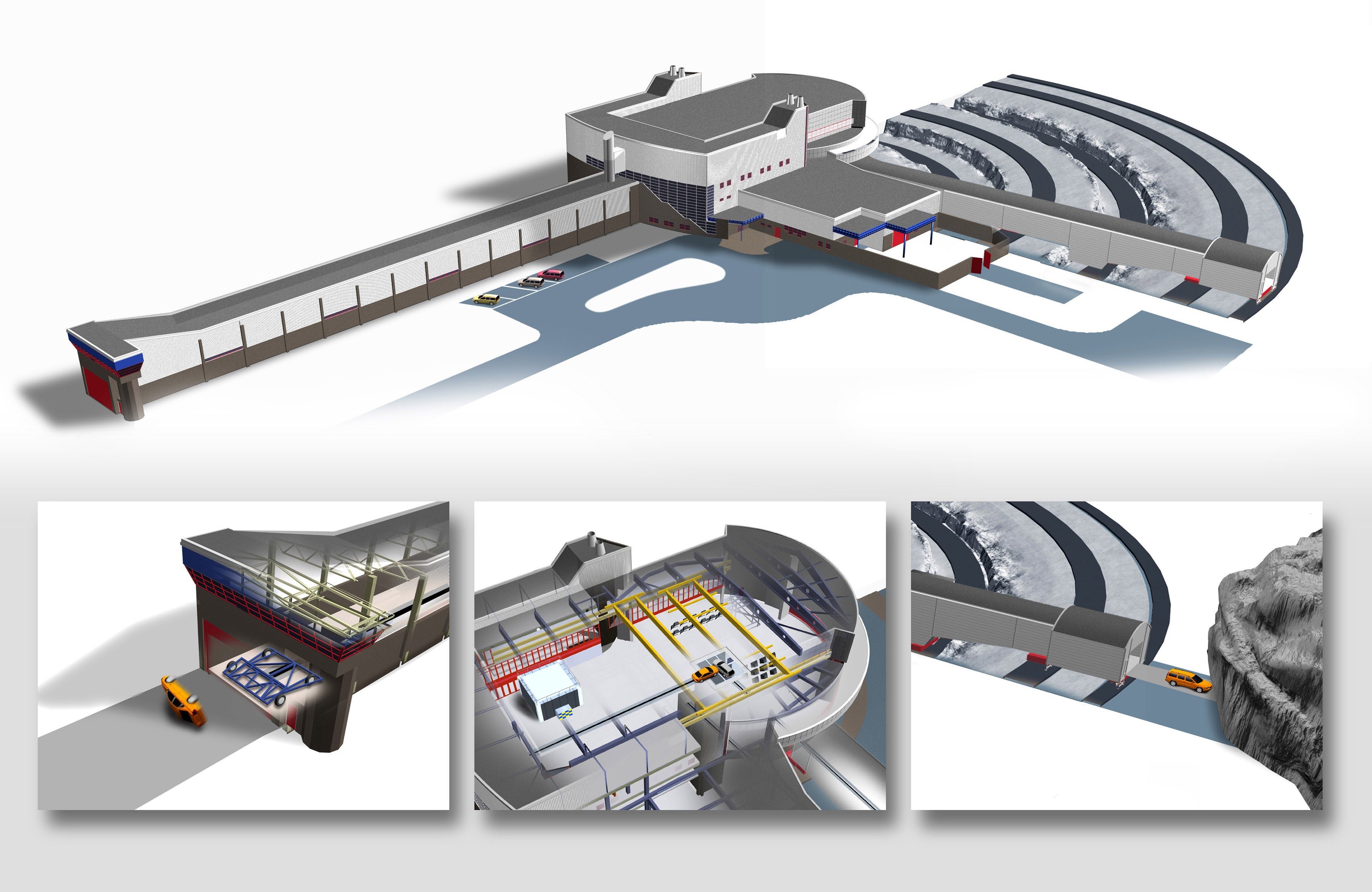 As Thomas Broberg, senior safety advisor at Volvo Cars explained a decade ago during the facility’s 10th birthday, the center can handle more than 400 full-scale tests a year, to a degree of precision that translates to less than an inch between the two colliding vehicles at 31 mph. This corresponds to two-thousandths of a second.

In 2010, Volvo upgraded to a high-speed camera system capable of recording the events at 200,000 frames per second, including from underneath through the track’s Plexiglas-covered pit. 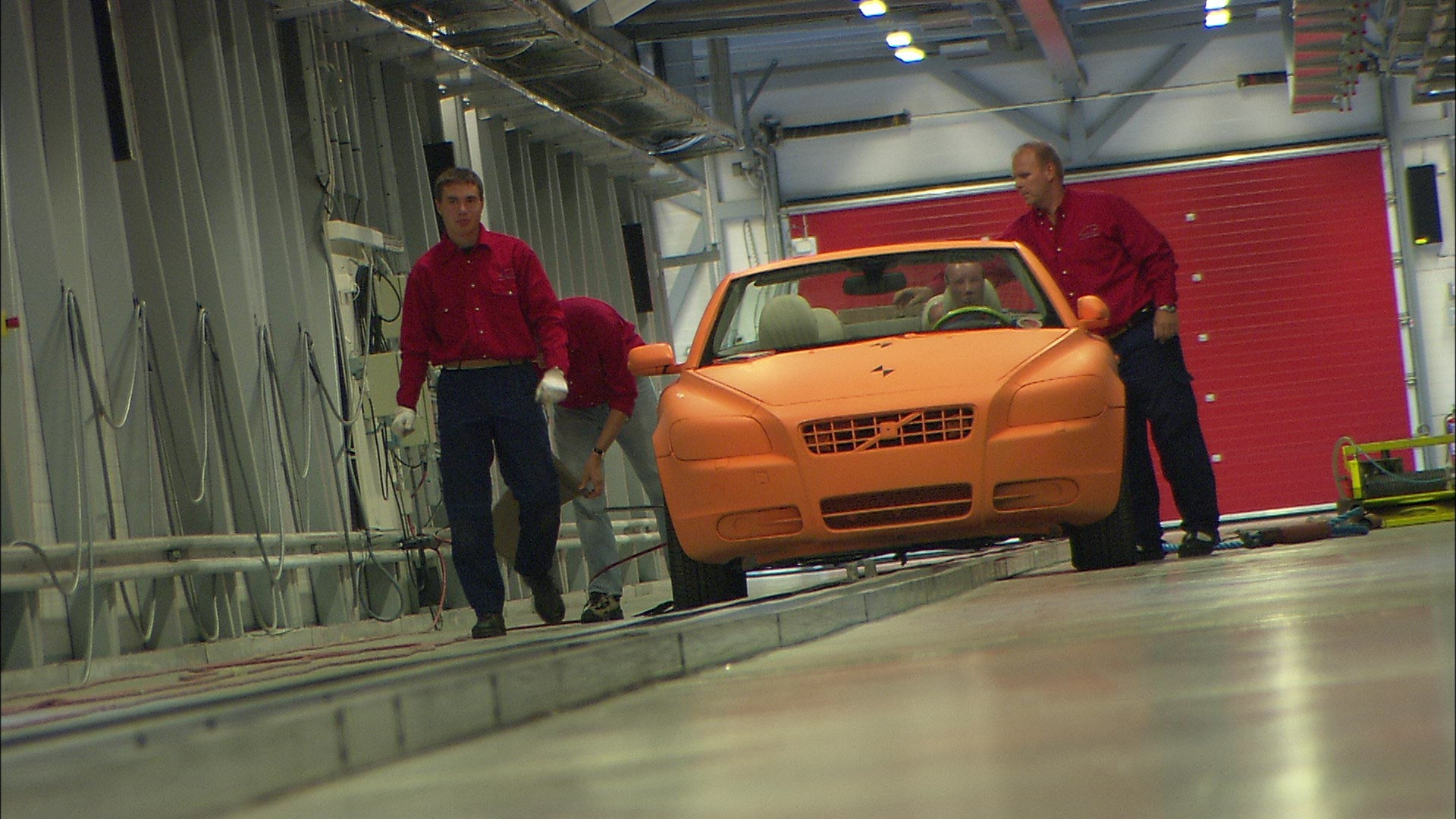 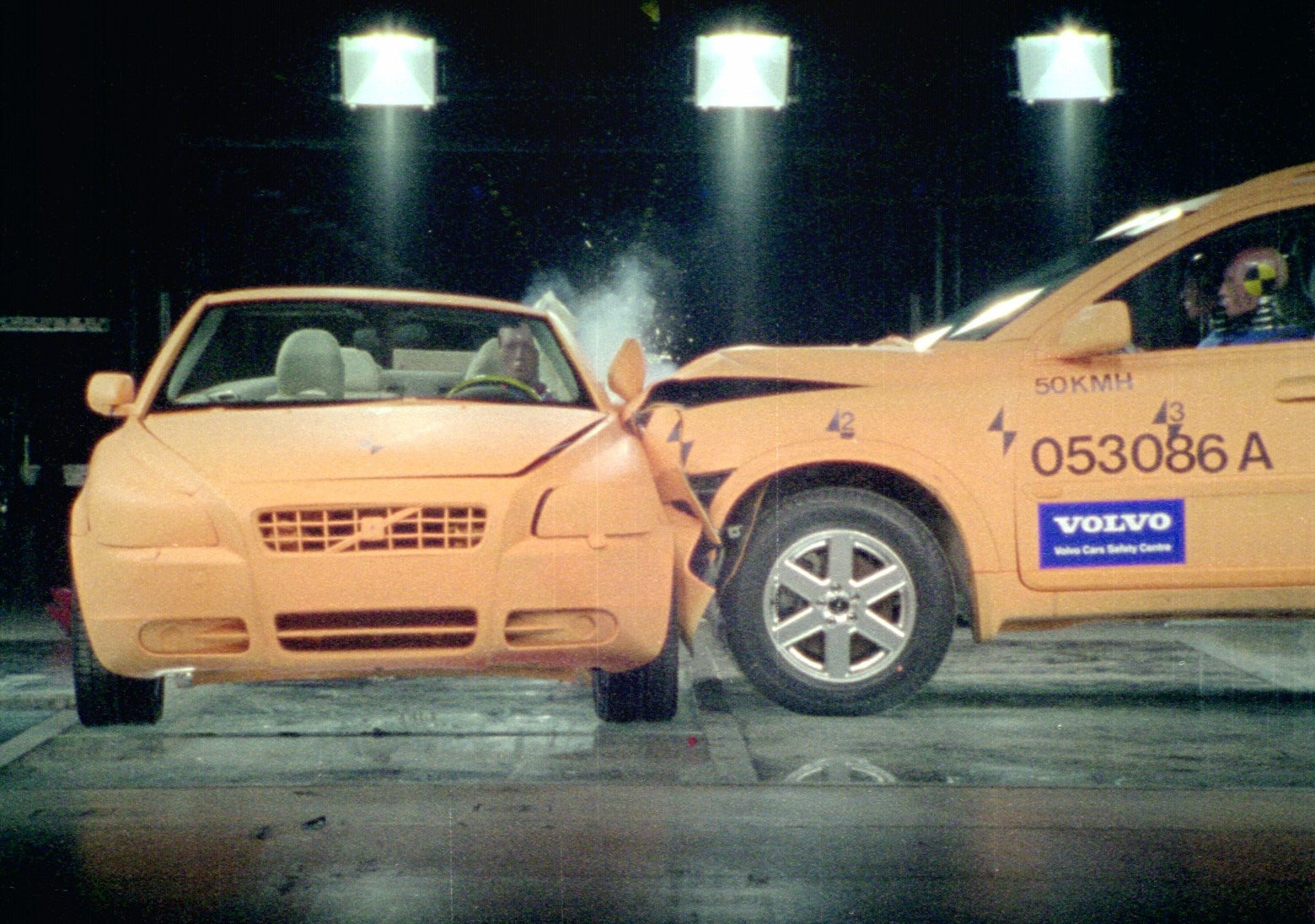 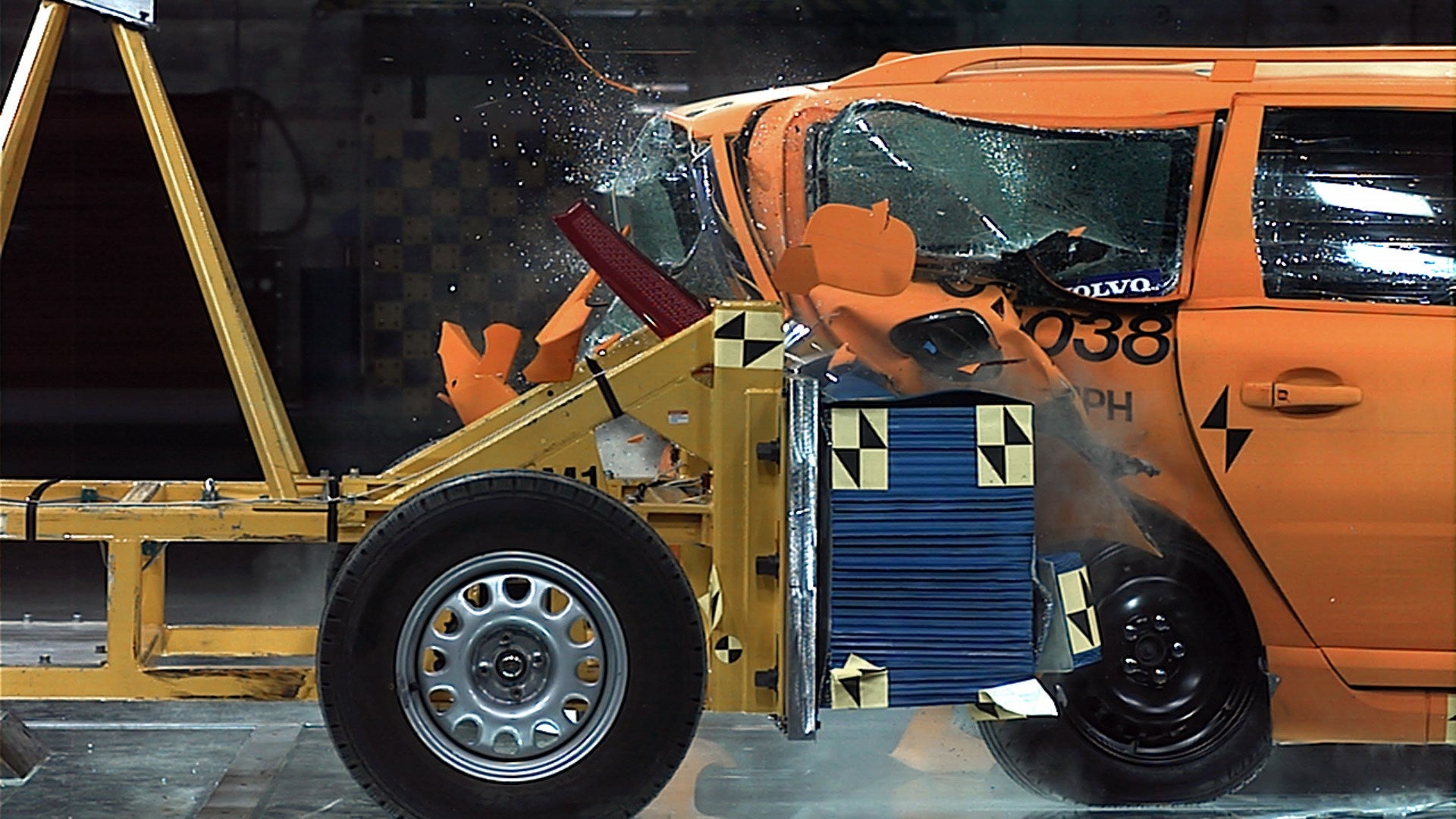 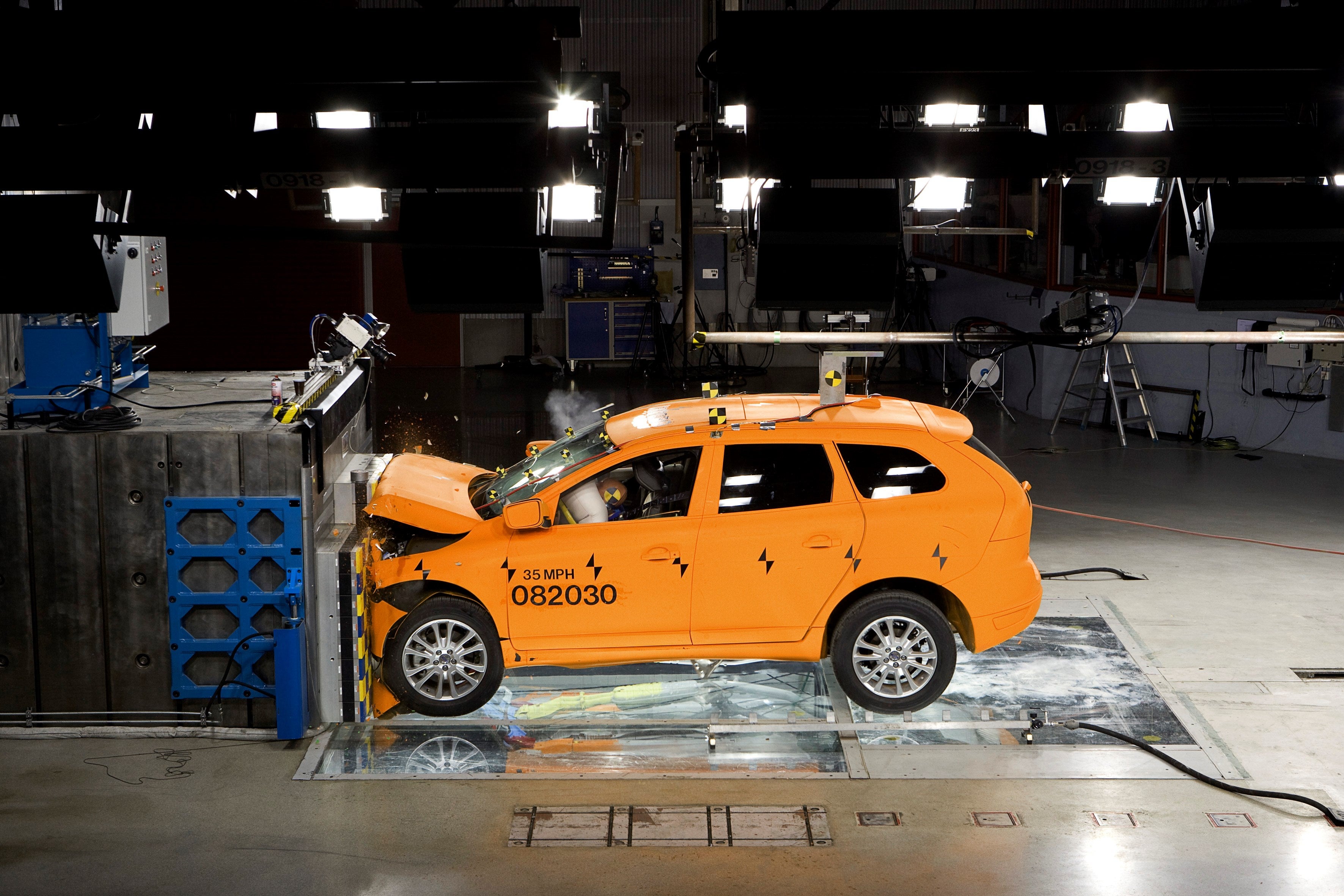 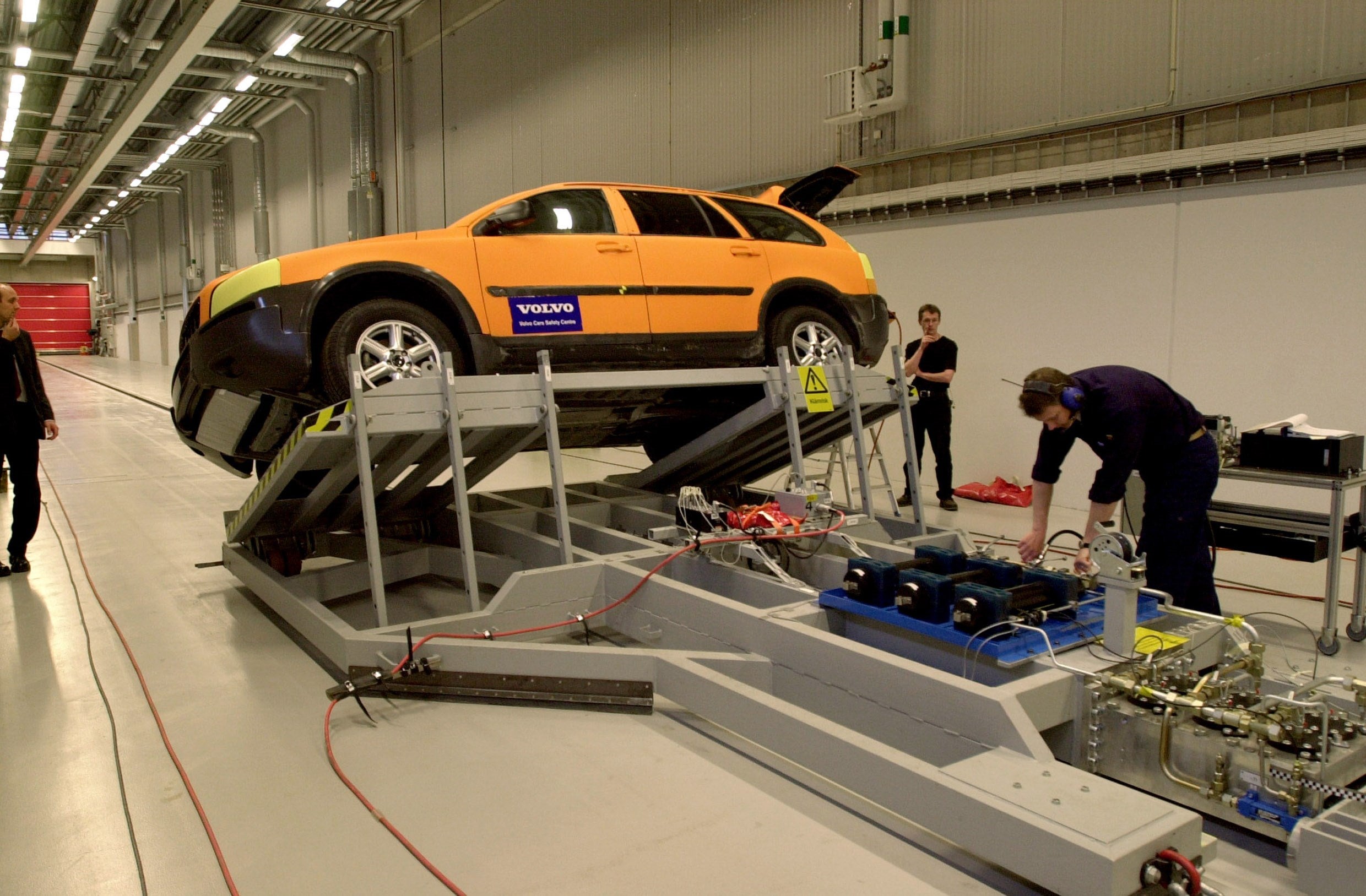 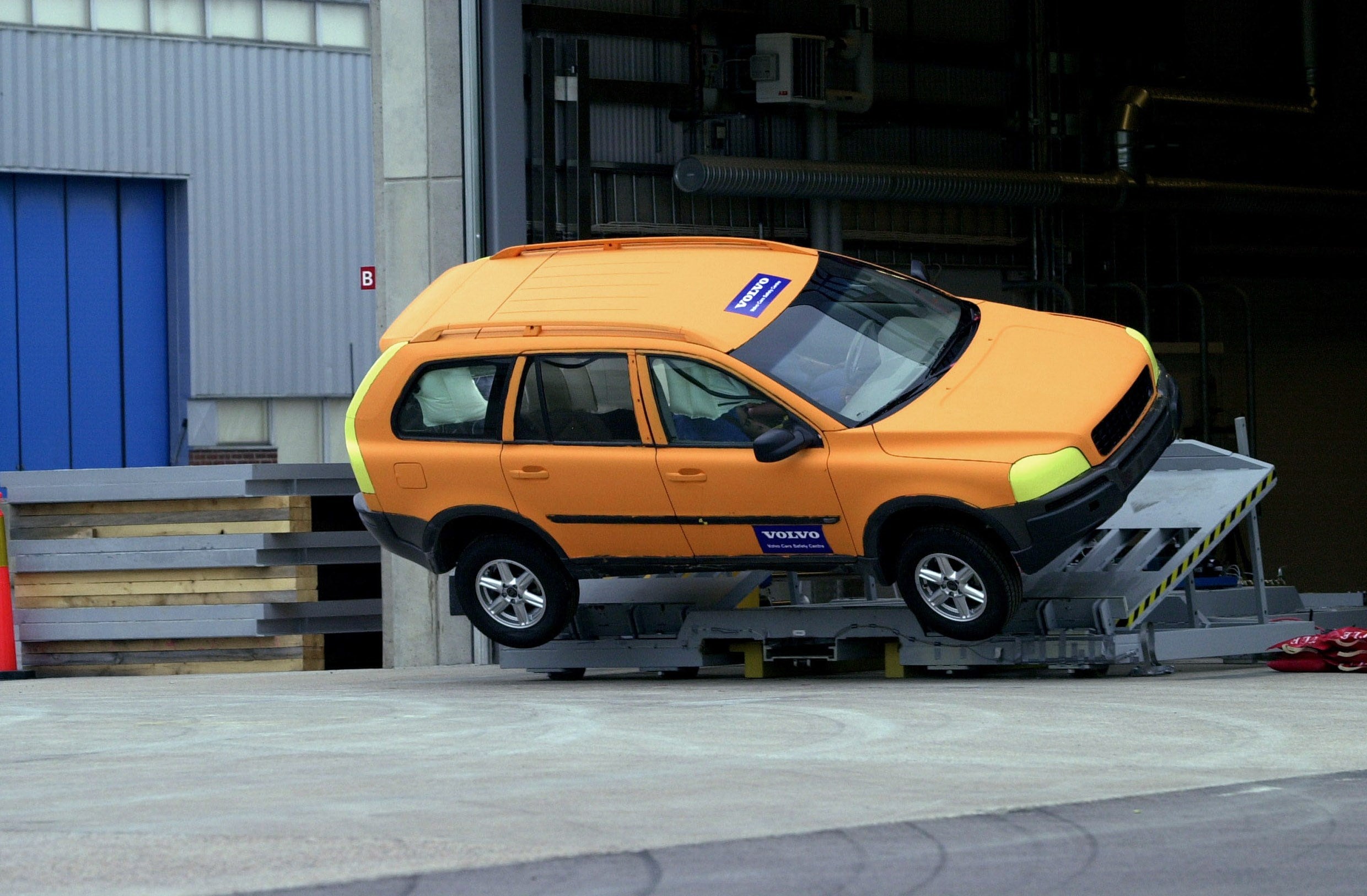 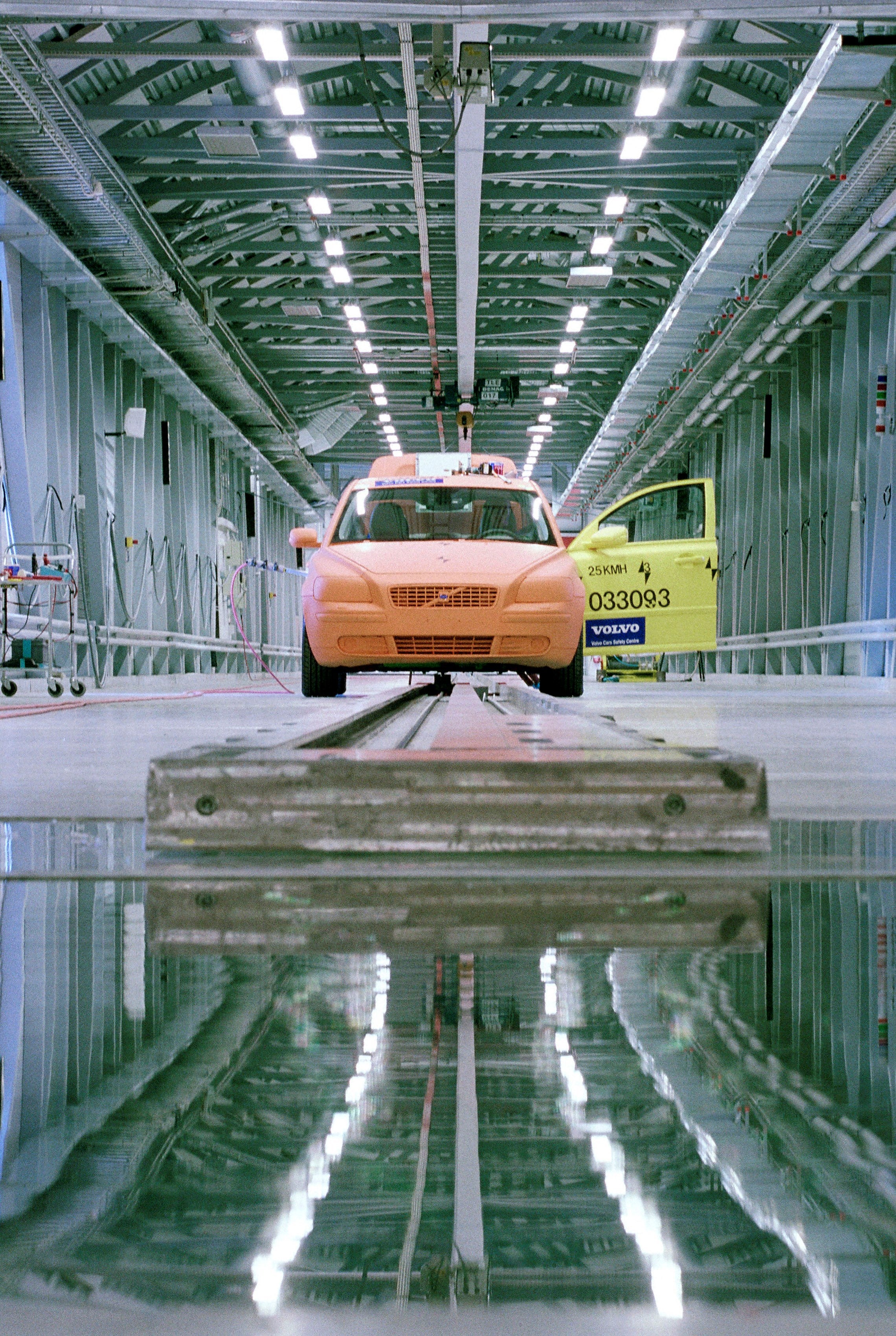 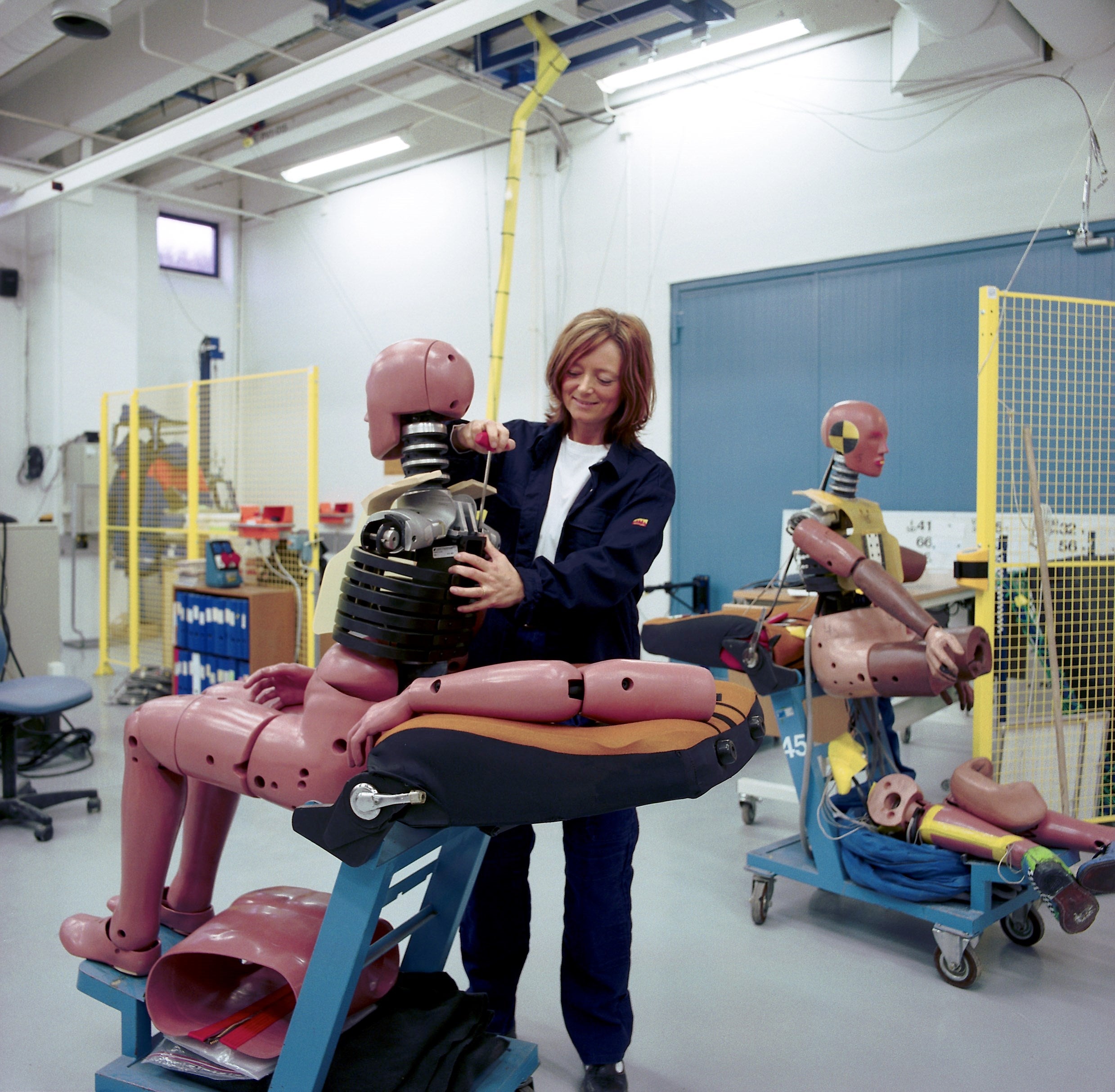 Today, while the dummies and barriers are loaded with more sophisticated sensors than ever, Volvo’s work gets exciting from the cars’ semi-autonomous features, tests focusing on the female physiology, and the fact that Volvo is owned by the Geely Group, along with Polestar, Lotus, Lynk & Co, the London EV Company, and more.

This means that while Volvo says nobody is supposed to die or get seriously injured in any of its new models, its lab works on a lot more than Volvo’s core business of Swedish premium cars. Recently, the Torslanda facility has also been equipped and prepared to execute electric car crash tests in an equally safe manner. 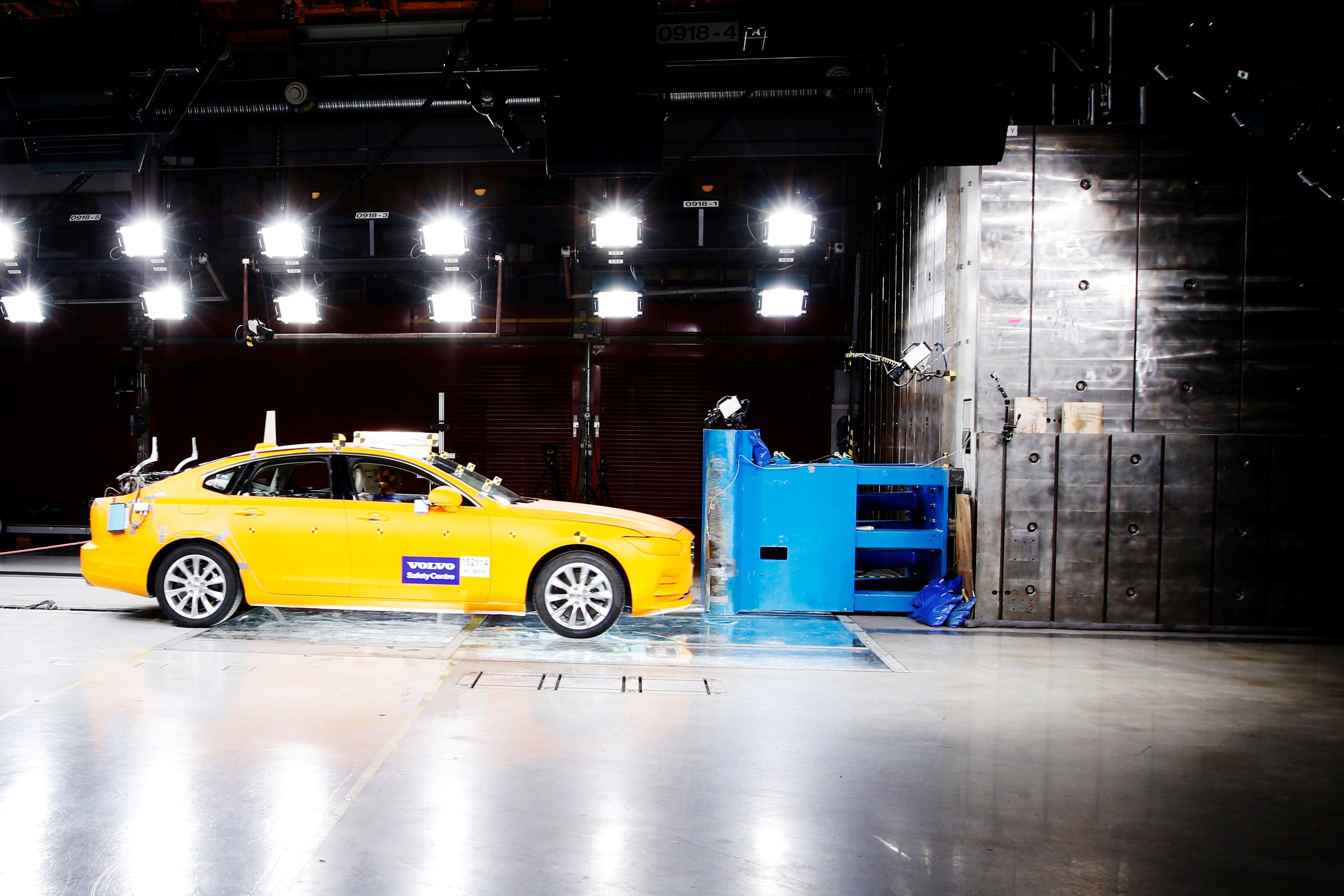 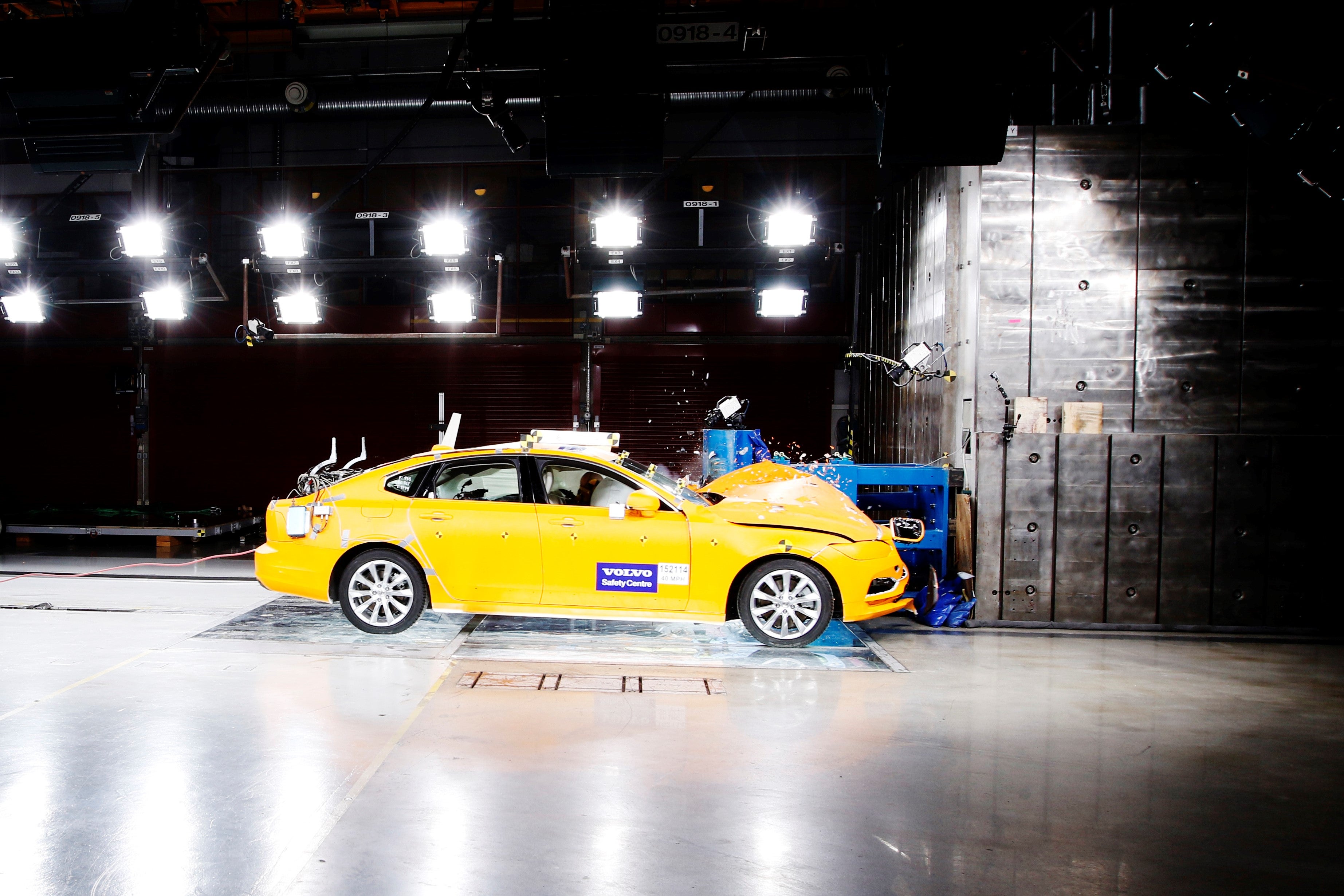 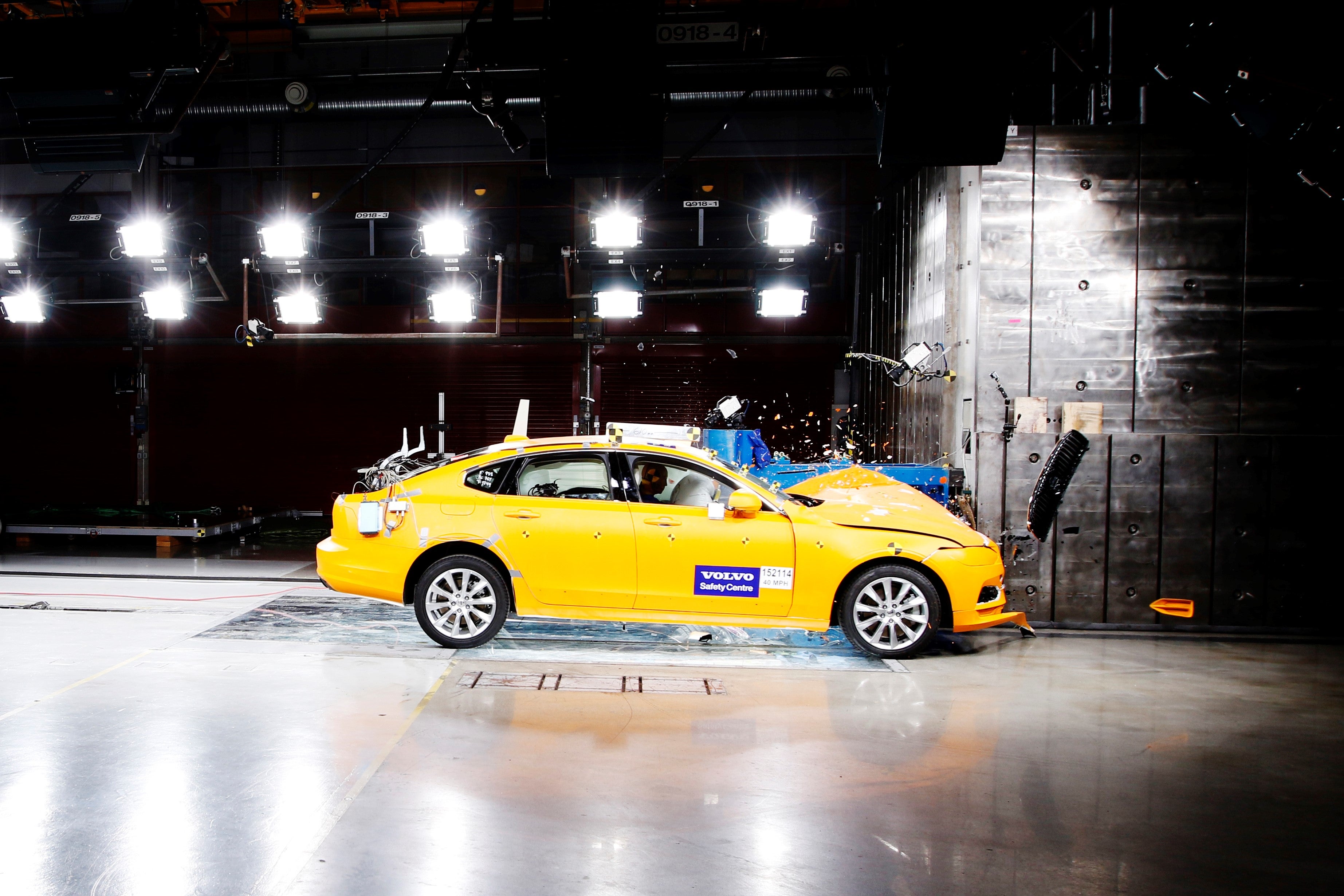 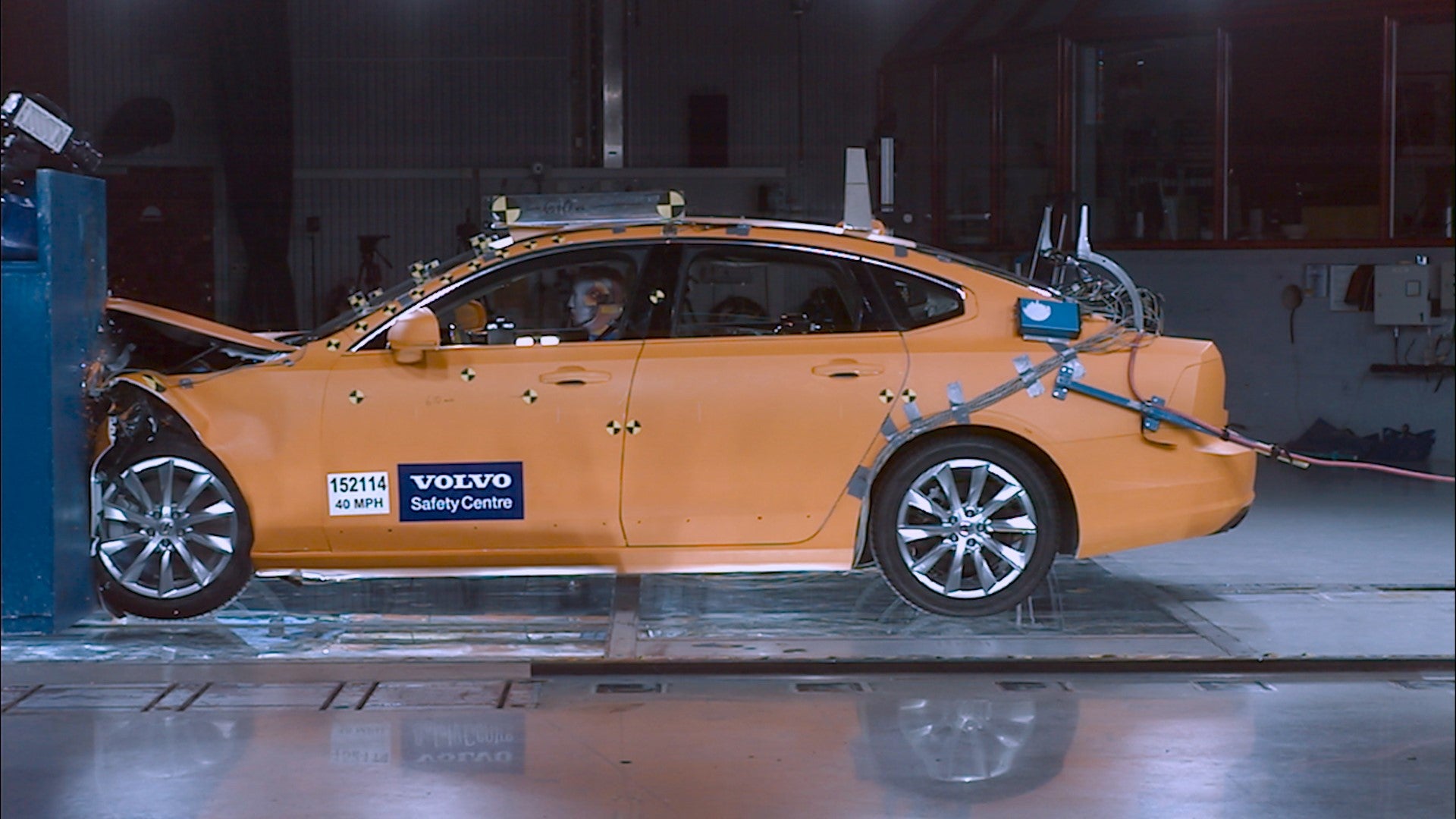 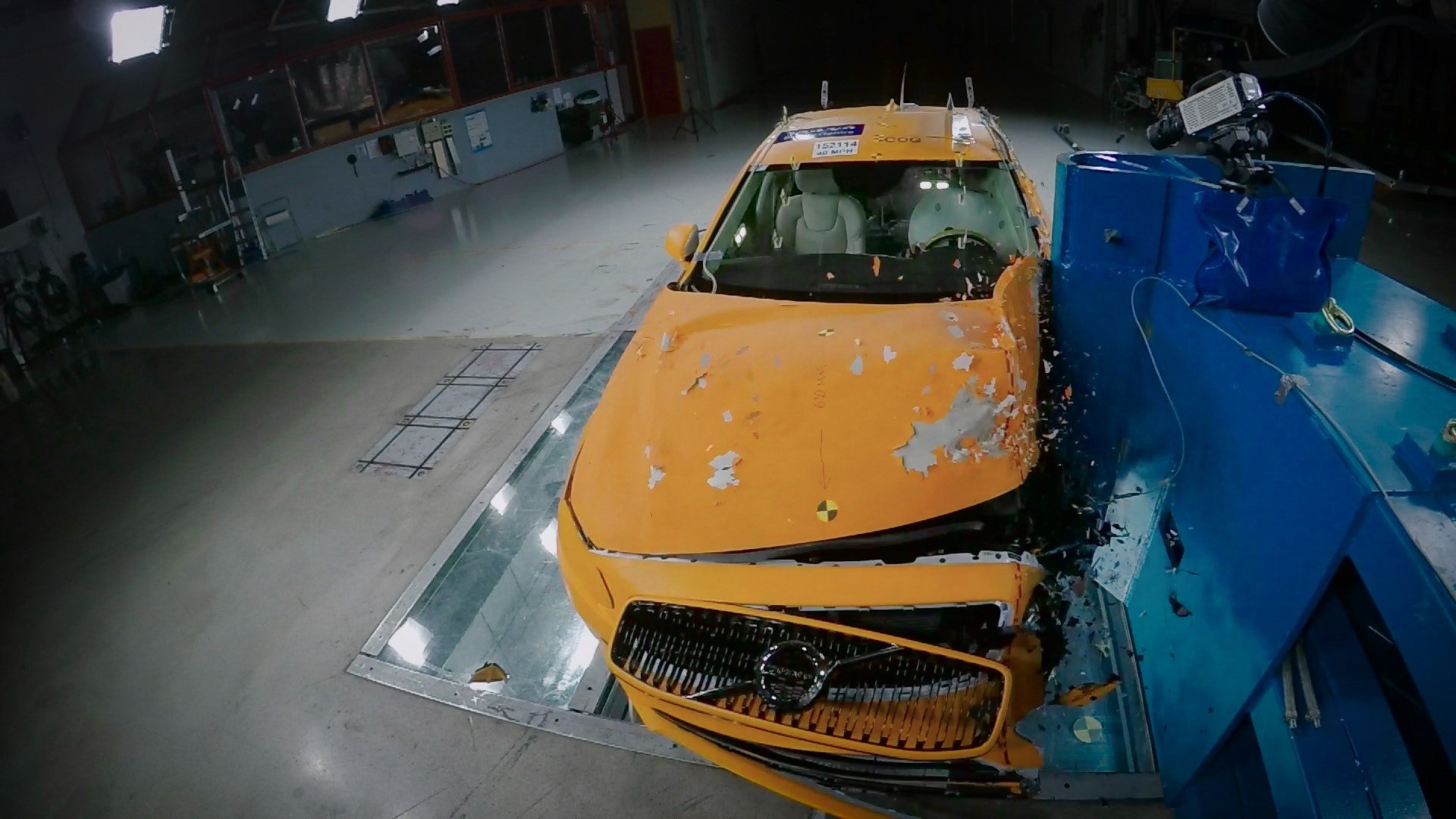 Of course, Volvo began its safety program decades before the rotating Torslanda center was constructed. Having introduced the three-point safety belt as standard equipment following Nils Bohlin’s patent filing in 1959, the carmaker never lost its ambition to understand accidents. All the while, it’s been steadily working to prevent them and reduce road traffic casualties worldwide.

One test that certainly did not take place at Torslanda was Volvo’s 1985 stunt to promote buckling up, during which a few unlucky Volvo 760 executive sedans were driven off a roof to fall 46 feet and simulate head-on collisions at around 30 miles per hour in a simple, yet dramatic fashion. For the clip, we thank Volvo Cars USA of 1985. For the rest of the brand’s achievements in connection with keeping us in one piece, the entire team at the Volvo Cars Safety Center in Torslanda, just outside the fine city of Gothenburg.

Got a tip on crash testing, Volvos, or all of the above? Send us a note: [email protected]

Related posts:
Next-Gen Kia Cadenza / K7 Spied Hiding A Stylish Makeover
Honda's New Robot Buddy Helps Kids Cross Streets Safely
Best News
Ford Ranger MS-RT: motorsport look for pick-up truck – paultan.org
01/19/2021
FBI: No crime committed as ‘noose’ rope was there in 2019
06/23/2020
Why VW Pulled The Plug On A 400bhp VR6 Arteon R
06/23/2020
2021 Kia Grand Carnival breaks cover – solid looker! – paultan.org
06/24/2020
New Volkswagen Arteon Shooting Brake arrives as part of facelifted line-up
06/24/2020
Recent Posts
This website uses cookies to improve your user experience and to provide you with advertisements that are relevant to your interests. By continuing to browse the site you are agreeing to our use of cookies.Ok