Turning a used BMW 116i into a proper hot hatch: It now spits flames!

BHPian n:CorE recently shared this with other enthusiasts.

I present to you – an absolute antithesis of the car in my previous ownership report. Objectively, both of them are hatchbacks, but fundamentally they are different animals.

The one before this was a transverse FWD, turbo-diesel. Torquey, explosive low-to-mid range. Rapid in-gear acceleration. This one is a longitudinal RWD, turbo-petrol. High-revving, entertaining mid-range. Effortless top-speed cruiser.

It all started with hunting for a small car for my Mum. One she could pop around the shops and salons in, go to kitty parties, basically do mom things. By the time I am finished with this car, she’s going to be fed up with all the tinkering at some point and we might have to get her something new. But yeah, she’s okay with it, for now, in fact, she likes it a lot. Only people with eccentric tastes much like herself would like their car in Valencia Orange. It’s a proper BMW colour as far as I’m concerned. The idea of an RWD hatchback is quite an elusive one. I had to look up how many of these automotive unicorns are in existence. This is a two-part question – How many RWD hatchbacks have been sold? a. “in India?” or, b. “in the world?”

The last RWD hatchback on sale in India that comes to mind is the Tata Nano. That car despite its comparable equipment levels was conceived with an entirely different set of design values.

As far as “in the world” goes, I really couldn’t come up with anything modern except the F20/F21 BMW 1-series which made it to our shores back in 2012. Although, it wasn’t on sale very long given BMW India’s delusional pricing, shockingly low levels of equipment (especially the one I ended up with), and its perceivably impractical nature.

This car was pretty much dead on arrival as far as sales numbers go. Let’s get all that’s wrong straight out of the way:

The car was a used purchase made in January 2019. It is an MY-2013 BMW F20 116i which had just about 19,000 km on the odometer. It was very gingerly driven within the city fulfilling similar duties (as it does now) at the hands of an affluent middle-aged woman.

A bit of a disclaimer, my driving impressions for this car would often be benchmarked concerning the other “hot hatch” in the garage. It’s my beloved first project car.

I’d suggest giving that hyperlink ago. It might seem like a dense read, I’m still experimenting with writing styles. Here’s Hoping I hit the sweet spot between informational, insightful, and engaging soon.

Straight off the bat – This is not a fast car, at least it doesn’t feel that way. The power delivery of this engine reaffirms that it is indeed the way the torque is delivered is that makes you feel that punchy grunt. I’m coming from a daily driving diesel engine with peak torque of around 310 Nm available between 2,000-3,000 rpm (i.e 1000 rpm spread). Feels very spikey. A much more pronounced pushback to the seat is felt in this band as a result.

The low-end although not explosive is very responsive. It picks up revs eagerly and goes about progressively delivering power. It’s a smooth petrol motor with a sweet-sounding stock exhaust (in the top end). These characteristics felt much more pronounced after installing the MST Performance Intake Kit. The stock plastic hose was cracked around the edges where it clamps onto the turbocharger (a known issue). Instead of simply replacing the hose, I decided on upgrading the whole intake system which included the following:

MST performance claims a dyno result of +13 bhp & +23.5 Nm @ 4,000 rpm on a bone stock 2016 116i. A lesser restrictive intake made this engine noticeably more free-revving. It also makes the pssssstt intake noises on lift-off. Guaranteed wide grins, every single time.

Also, the stock diverter valve has been replaced with a GFB DV+. The precise workings and functioning of this part by design are best left to the explainer video as produced by GFB AU.

The net result of this modification is a sharper throttle response, which helps in better regulation of in-gear boost pressure & more sweet noises on the lift.

Historically, my family has always been inclined towards buying new. This however is something the more I think about, the less sense it makes to me. I have developed quite an automotive habit over the years. Lurking around in specialists’ forums empowered by Chrome’s translate page feature, looking up diagrams and part numbers on RealOEM, ordering my parts from eBay, YouTube diagnosis, the list of resources available now is endless. Moderator akshay1234 and I go back to our college days, he has always been my guiding light, whenever I find myself out of my depths.

My used car buying process is quite motivated by the incremental changes I can make to it over time. It’s got to have a certain sense of OEM plus if you like. The way it should have been sold to us enthusiasts in the first place.

BMW’s intentions with the 1-series started out chasing its core values. However, in a market like India, we were sold a hot hatchback that was lukewarm at best. The prince engine sees a varied application across a LOT of other cars from brands like Peugeot, Citroen & Mini in a myriad of states of tunes. Tweaked versions of this same engine continue to be in use at present, the highest power output of which is 270 bhp in the Peugeot 308 GTi.

Quantum tuning UK’s figures for their engine remap gives a whopping 64% increase in horsepower and a 40% increase in torque. The car now makes peak horsepower of 220 bhp @ 6,000 RPM & 310 Nm peak torque @ 2,500 rpm. A custom de-cat downpipe was also thrown into this mix for smoother idle, cleaner revs, and free-flow of exhaust gases. Also, sound, this is now possibly the sweetest sounding petrol engine I have ever owned. In comfort, below 3000 rpm (where my mom would drive it) there is no telling of its sporting intentions. It’s got beautiful low-speed driveability and half-decent throttle response even in ECO PRO mode. Classic Dr Jekyll & Mr Hyde.

Throw in those claimed added horsepower figures by MST Performance with their air intake kit, we’re close to 233 bhp & 332 Nm. I know the numbers do not work like that*; I am due to a trip to the dyno soon, really curious to see how much power she is putting out.

This is now, a PROPER hot hatchback. Just like it should have been since it rolled out of the factory. I am nursing a few leaks at the moment because of a few brittle hoses and old gaskets giving away. Other than that, oil temps are fine and the car has not thrown out any errors whatsoever.

The following items were also coded in:

Sport+ mode: Sharpest throttle, maximum punch setting, BMW dynamic stability control will ensure a very controlled loss in composure at the rear every single time you launch from a standstill. It is enormously entertaining. You get intake noises, boost wooshes, and rorty exhaust notes up to the redline. The sport transmission update has really worked wonders, there is a perceptible difference in the way it goes through the gears now. Liftoff and the DV+ will get you back on boost almost immediately as you get back on the throttle. Lift off too quick, you will get deep pops & bangs that are not indecently loud yet very sporty. Bring the exhaust up to temperature, and yes, she will even spit flames out the tailpipe!

I do not care much for the premium hatchback/CSUV offerings of the present day even though they may be a lot more spacious, practical, economical, and reliable. For the price of a new KIA Sonet, I pride myself in driving what is possibly the last RWD hatchback in existence designed by the boys in Bavaria, souped up by a bunch of boys in Bombay. Huge shout out to the team at Redline Autohaus. We’ve made something special here. This one is a keeper, have big plans for her in the distant future. For now, can’t wait to take her out on long drives and put her through its paces once lockdown is finally over.

I do not want to sound repetitive, but as I said in my ownership report of the Polo GT TDI as well, caveat emptor. The tuner life is not for everybody, such projects can soon become money pits especially when you end up throwing parts at it willy-nilly in hopes of fixing a particular problem. It’s a test of patience and a matter of perseverance. 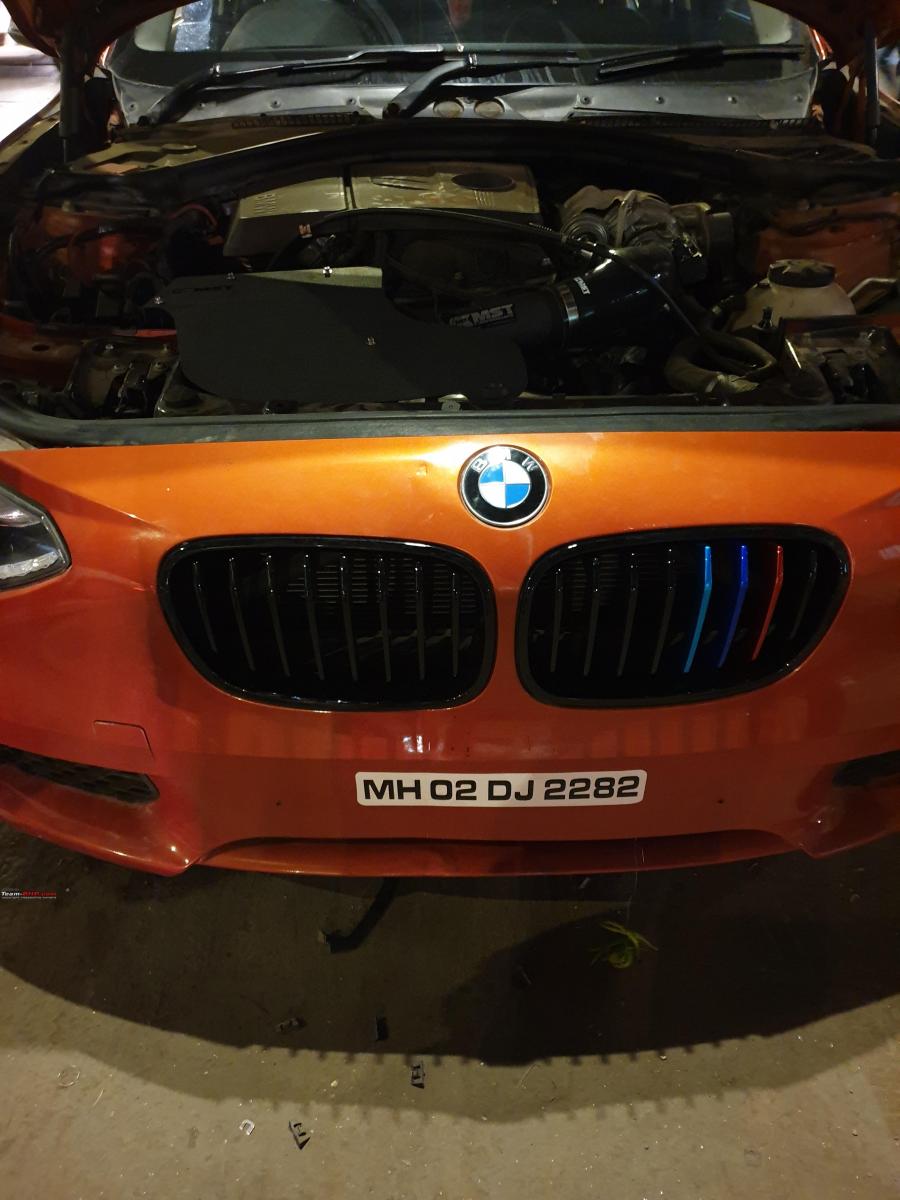