Is Don Schumacher Racing (DSR)—home to 366 NHRA trophies, 18 championships, and a 150,000-square-foot tech utopia at Brownsburg, Ind.—suddenly becoming a shell of its routinely remarkable self?

Or is it more of a case of megateams in general are dying?

With the announcement Thursday morning at Charlotte’s zMAX Dragway in North Carolina that motorsports mogul Tony Stewart and Top Fuel-driving fiancée Leah Pruett are launching their own NHRA team and taking three-time Funny Car champion teammate Matt Hagan with them, DSR will be losing three-fourths of its on-track presence for 2022.

Three-time Top Fuel champion Antron Brown has been planning for the past two seasons to transition to his own team as of the first of next year. That, coupled with the departure of Funny Car racers Tommy Johnson Jr. and Jack Beckman at the end of the 2020 season because of sponsorship issues, means DSR—the Team Penske of the NHRA—will have lost five of its six drivers within 24 months.

Tony Schumacher, the eight-time Top Fuel champion sidelined with no sponsor for all but eight races since 2018, announced Wednesday he’ll be back for a full 2022 season, courtesy of philanthropists Joe and Cathi Maynard. So Don Schumacher has at least some positive news in this revolving-door scenario.

All of this driver comings and goings (mostly goings) certainly has to make Funny Car veteran Ron Capps, the Lone Ranger from the 2021 lineup, wonder whether to stay put or venture out on his own at this point in his career. That’s something in the past he has said he might be interested in one day.

“You’ve got to step back and look at ‘Where’s our sport at right now? And where’s it going? I think through COVID, our sport did better than most,” Capps said. “And throughout this year, there’s been a lot of races without many empty seats in the grandstands. I think you stand back and look at our sport and how well it’s been through all this period. But where is it going?

Part of the answer is Stewart, who offered a glimpse Thursday of why established drag racers would leave the gold standard of the sport to undertake a brand-new venture (besides the fact his organization has amassed 30 championships and he has been a series, racetrack, and team owner, as well as champion driver).

Stewart said, “It doesn’t matter if it’s quarter-midgets, go-karts, all the way up to NHRA drag racing, Indy Car, Formula One, NASCAR—the competition keeps getting closer and closer and tighter and tighter. And you have to be on your game. But that’s why we do what we do . . . that challenge of trying to figure out how to do it better than everybody else.”

Stewart, Hagan, and NHRA president Glen Cromwell all praised Don Schumacher for his accomplishments and for his guidance and support as Stewart’s new two-car team takes shape.

“None of this would be possible without Don Schumacher,” Stewart said. “His support of what we’re doing has been through the roof. He’s done an amazing job of helping me understand all the nuances of the sport, how to take care of the partners, how to make the program work. He’s spent a lot of time with me to help us understand what it takes to be successful at this level.”

Hagan thanked Schumacher for allowing him “to be part of a great group. We’ve won multiple championships and lots of trophies and set records. He’s been gracious and great to allow me to have the opportunity. But I am pumped up to be part of Tony Stewart Racing. I think this guy’s got it together. Tony, he’s the man. With his relationships and his sponsors, I have no doubt this is going to be a big splash in NHRA. The energy, the charisma, the chemistry that we’re going to have as a team is going to be amazing.”

Pruett said this new step in her career brings her “stability on multiple levels,” including “emotional stability” and “logic.”

Perhaps for Schumacher, the move disrupts stability and stirs a conflict of emotions as he has helped his racing birds fly from the nest. But he understands the inevitable, the evolution from single-car team to megateam to downsized team. Maybe it’s simply part of the evolution to the new landscape in drag racing.

Schumacher will turn 77 years old Nov. 4. The other two “superteam” owners, John Force and Connie Kalitta, are, respectively, 72 and 83 years old. Kalitta, who fields two dragsters and a Funny Car, will turn 84 before the 2022 season begins. 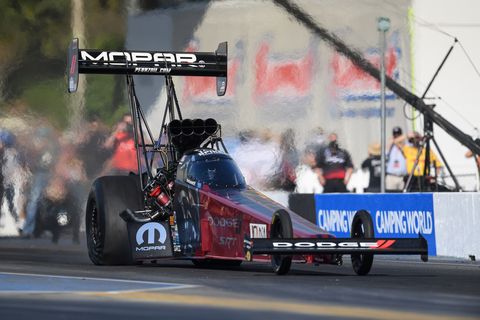 Hagan is not the first champion to leave the tent of an established team. Del Worsham, a past champion in both Top Fuel and Funny Car, left his seat at Kalitta Motorsports and spun off his own Funny Car team with Alexis De Joria in the driver’s seat.

And Force, like Schumacher, has had his COVID-induced on- and off-track struggles. John Force Racing sat on the sidelines in 2020, lost almost all of its mechanics and had to rebuild. He eventually pared down from four cars to three. That left Austin Prock, the talented and promising 2019 NHRA rookie of the year, the odd-man-out. It’s clear that Don Schumacher isn’t the only one downsizing. The luster is gone from the megateams at the moment.

Don Schumacher said late last season, “I do not believe we will ever be back to 2019, because everything has changed so much in this world and will continue to be changed for a long time.”

The NHRA, though, undoubtedly will be the beneficiary of Thursday’s announcements. As Cromwell gave a nod to Schumacher because he “has done a lot for the sport,” he was animated as he embraced the sport’s new “team of superheroes.” Cromwell called Stewart “the Superman of Motorsports,” Pruett “Wonderwoman,” and Hagan “Hulk Hagan.”

Their collective superpowers will shine once Stewart finalizes contracts with a manufacturer and marketing partners in the coming weeks.

And now the spotlight turns to Capps, as drag-racing fans wait to see if he might be next to try something new.

Capps said, “I know the rumor’s out there” about his future but that at this point rumors remain rumors, although he said he always has the mindset that “I want to help the sport grow. I grew up around this sport of drag racing. I’ve been around it all my life. I’m lucky to be where I am at now, making a living. It’s an exciting time. There’s a lot going on right now.”

If he ever were to establish his own team, Capps said, “the time and the place has to be right, first of all. And I’ve been pretty lucky to be around two pretty great owners in our sport Don Prudhomme and Don Schumacher. They’re completely different at what they do and their approaches. I’m smart enough to know to take mental notes on a lot of little things every day and watch the process and how they’re so successful . . . watching how Snake carried himself and how he supported his sponsors and watch how Don has brought the business-world approach to team ownership.

“When that time comes and I decide I want to pursue that, then I’ve got fantastic notes, if that’s something that I wanted to do,” he said.

Capps still marvels at what Don Schumacher has been willing and able to build: “I see what DSR has done with our chassis-building, the in-house shop . . . and I think it was a leapfrog performance, as far as chassis were considered. . . . You look around at DSR and you’ve got Bob Tasca and Cruz Pedregon [as partners in a technical alliance]. You’ve got (the Funny Car of) Paul Lee parked there in the shop. Antron, of course, and you go down the list. And there’s lots of different manufacturers’ cars working out of that shop. I think what you’re seeing is a transition of what Don has done and worked hard at. If you look around at DSR, it’s incredible: blower dynos, clutch dynos, the chassis shop . . . If you need something changed or something built or a new car, you walk 30 feet and you’re talking to Joe (Fitzpatrick) in the chassis shop.”

Capps, among others, is also quick to point out that the Capco Contractors/Torrence Racing family team has had a profound impact on the nitro scene and shown that the megateam is not the only path to

“You’ve got to look at the success of the Torrences,” he said. “Here’s a team that came along, not a megateam. They have another car, of course.” He was referring to part-time racer Billy Torrence, who has confounded the sanctioning body by competing when he feels like it (or, as he puts it, “by invitation only” from wife Kay Torrence, the legal team owner) and winning, qualifying for the Countdown, and finishing in the top five. Capps said, “The approach was to have one car [Steve Torrence’s], win a championship, buy parts from manufacturers and go out and run them—as opposed to a John Force or Don Schumacher, where parts are built in-house. And they’re not only winning championships [Steve Torrence is aiming for his fourth straight in Top Fuel] but really dominating the past few years.”

What all this means is that the megateams don’t necessarily have the advantage they might have had a decade ago. They’re obscenely expensive to maintain. Many would argue they detract from “the show.” And they knock themselves out in an environment where others increasingly are working smart, not just hard, which, as Brown said, means “you don’t have to reinvent the wheel.” So the rise in independent teams – even “super part-timers” who don’t race all the time but always are threats to win – seems to be the trend. And it definitely has affected Don Schumacher Racing.

Don Schumacher Precision Manufacturing, the newest arm of his racing business, makes and sells parts and pieces to a broad spectrum of racing customers but also serves other industries. That venture, along with Tony Schumacher’s return to the dragstrip to pursue a ninth title, is keeping DSR in a somewhat-normal orbit for at least the near future.

And while John Force Racing and Kalitta Motorsports have yet to tip their hands publicly about 2022 plans, it’s clear the sport is starting to see a significant shift in the way teams do business.

And how Tony Stewart and his new team, which definitely will attract fresh attention to the Camping World Drag Racing Series in the coming year, does business will be something to keep an eye on.