Volkswagen might have lagged behind the rest of the market in the highly competitive crossover battle, but the company has since fleshed out its portfolio in an effort to solve all of life’s transportation problems. The latest gas-powered crossover to join VW’s ranks is a compact crossover that effectively fills the void left by the departed Golf. Dubbed the VW Taos, this entry-level VW starts just shy of $25,000 and pits it in the middle of the compact-crossover battle. Powering this Taos is a 1.5-liter turbocharged four-cylinder that sends 158 hp and 184 lb-ft of torque through either an eight-speed automatic transmission before hitting the front wheels or a seven-speed automatic if equipped with the 4Motion all-wheel-drive system. 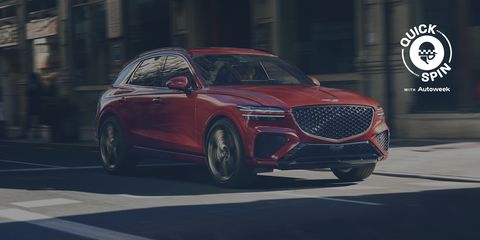 In a similar place, Genesis is also constantly expanding its crossover options to help sway buyers into the fold. While larger and more expensive than the Taos, the Genesis GV70 does a similar amount of heavy lifting for the team at Genesis, helping to expand the Genesis lineup and give prospective buyers all the options that their hearts—and the market—demands. Powering the Genesis GV70 is either a 2.5-liter turbocharged I4 or a 3.5-liter turbocharged V6. Both transmissions feed an eight-speed automatic that then transfers power to the standard all-wheel-drive system.

On this bonus episode of Quick Spin, Autoweek boss Natalie Neff chats with Wesley Wren about her time in the Genesis GV70 and the Volkswagen Taos. The pair also talk about the growing demand for crossovers, the roles that both of these vehicles play for each respective company and more.

Tune in below, on Apple Podcasts, Spotify, Stitcher, or wherever podcasts are played.