Home » Auto News » The Automotive Holy Grail: What Long-Lost Car Would You Love to Rediscover?

The Automotive Holy Grail: What Long-Lost Car Would You Love to Rediscover?

The worlds of art and cinema have their lost masterpieces—works destroyed, looted or simply forgotten in some dusty closet somewhere. A lot of times we don’t know if any of ’em were actually good, but it’s almost beside the point: The mystery surrounding these artifacts is a large part of their irresistible draw. There’s the thought that you might stumble upon one after years of Indiana Jones-like questing or, even better, sheer dumb luck.

The car world has its long-lost rarities, too, and here I’m not just talking the typical barn find. There are number of relatively well-known rare, or even one-of-one, relics the locations of which are unknown … to the general pubic, at least. They may be gone forever, or simply waiting for the right moment to reemerge, but for now they exist only as myth. As with many long-lost objects, it’s tough to separate anecdotes and hearsay from the sparse hard facts—and anyway, there’s always the chance that some far-fetched rumor is the first bread crumb on long trail leading to the eventual prize.

Sometimes, we know what happened to the “missing” car in question. Take the very cool Chrysler Norseman concept. It’s not exactly lost, in that we know precisely where it is: at the bottom of the Atlantic off the East Coast, somewhere within the wreck of the SS Andrea Doria. The Norseman went down with the liner in 1956; it was en route to the United States after being bodied at Italy’s Ghia (the carrozzeria built many of Mopar’s midcentury concepts). It was never displayed to the American public and remains one of the great Virgil Exner-era might-have-beens.

Speaking of slightly more obtainable concepts, the survival of so many American dream cars should be enough to give treasure hunters hope: Automakers often say they intended to destroy these creations after they’d served their purpose on the show circuit, and indeed, they sometimes did just that. But on more than a few occasions, they were smuggled out by key personnel who couldn’t bear to see their work shredded. And even if they were “destroyed,” it was sometimes done in such a way that they were more or less restorable decades later. What else escaped Detroit’s design domes? 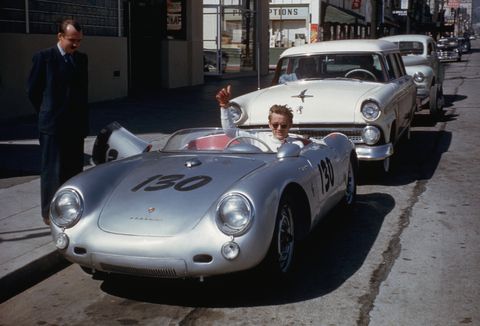 Then there are cars with histories that have been deliberately shrouded in myth and misdirection. There’s probably no better example of this than James Dean’s ill-fated 1955 Porsche 550 Spyder, “Little Bastard.” Dean died behind the wheel of his Porsche on Sept. 30, 1955; that much is certain. But after that, things get confusing. The valuable engine apparently went to a gentleman racer, a certain Dr. Eschrich, for use in a Lotus, and the rest of the car’s remains were purchased—supposedly—by customizer George Barris, who somewhat gruesomely exhibited the wreck like a sideshow huckster. The doctor was later injured or killed in a crash, all but confirming that Dean’s Porsche was cursed. 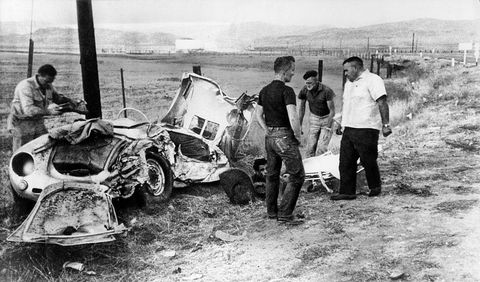 Except maybe that’s not what happened at all. Maybe the doctor bought the engine from Barris. Or it could be that Barris exhibited a dummy car, or only certain parts pulled from Dean’s car grafted on to a stand-in. The rumors of a curse seem to be unsubstantiated, as Dr. Eschrich apparently died of natural causes after a long life. But fanning those particular dark flames certainly would have been to Barris’ advantage as a promoter. Stories about the whereabouts of Little Bastard seem to pop up every few years. They’re good stories, sometimes involving outlandish claims like the car being hidden away behind a brick wall. Until I see the parts myself, I’m not ready to believe any of them.

Finally, there are cars that have simply vanished without a trace. The 1935 Bugatti Type 57 Aérolithe prototype, a magnesium alloy-bodied predecessor to the famed Atlantics, disappeared sometime in 1936. It may have been disassembled by Bugatti, its parts reused elsewhere. Or it might have been destroyed accidentally during WWII.

Either of those outcomes is plausible, and in the absence of the original, the Aérolithe has since been painstakingly replicated. But could the original—or at least key parts of it, including its lightweight bodywork—still be out there, tucked away in some picturesque French chicken coop? Unless the car (or credible period documentation of the car’s dismantling) emerges, it’s impossible to prove one way or the other.

Another Bugatti is what is possibly the most famous missing car of all time: the 1936 Type 57SC Atlantic often called “La Voiture Noire,” or “The Black Car.” Of the four Atlantics built, it is the only one unaccounted for today. It is also, potentially, the most valuable vehicle in existence: Nobody knows what The Black Car would be worth if it were to be found, but some place that number at over $100 million.

That would be a truly staggering sum, even for Bugatti Atlantics. Its particular provenance—it was driven extensively by Jean Bugatti and, unlike the other three Atlantics, was factory supercharged right from the start of its life—is part of that, but I can’t help but feel that the air of mystery surrounding The Black Car contributes to the bonkers estimate.

The last, admittedly hazy, record of the car places it in France in early 1941, though Bugatti doesn’t claim to know what happened to it after 1938. It may well have been destroyed in war. Or it could have been tucked away in some little corner of Bordeaux, forgotten or concealed for whatever personal reasons. When it comes to Bugattis, this is not as crazy as it sounds! Again, we just don’t know, and that’s what makes the very possibility of the car surviving so tantalizing.

There are more than a few historical artifacts I’d like to track down; what happened to the original Packard marine V12s that powered Gar Wood’s record-breaking Miss America X, for example? But when it comes to automobiles specifically, my personal automotive holy grail is, like The Black Car, also a prewar classic—though one with a thoroughly American pedigree. I want to track down one of the lost 1933 Pierce-Arrow Silver Arrows.

The Silver Arrows were the storied Buffalo, New York, automaker’s attempt to wow the public and generate sales in the Depression-wracked marketplace of the day. With a price tag of $10,000, these were fantastically expensive halo offerings, so it’s not surprising that only five were built. Three are known to exist.

The other two? That’s where it gets interesting: I can’t figure out what happened to them—which means there’s a possibility that one or both survive. Unlike Europe, the United States wasn’t ravaged by war in the 1940s. But while they weren’t bombed into oblivion, there is a chance that they went to a scrapper during a wartime metal drive. I’m not sure I buy that, though, at least not for both cars.

The story goes that one of the three known survivors was restored by Bill Harrah after being pulled, in a pitiful state, from a Pennsylvania riverbed some years after the war. Harrah had an eye for distinctive cars and the resources to indulge it, but this happened long before Silver Arrows were selling for millions of dollars (the car pictured at the top of the article sold for $3,740,000 in 2015). It happened long before there was a collector-car market as we know it, in fact. Point is, it was clear relatively early on that the Silver Arrows were special vehicles. It is plausible that an owner, even a very patriotic one, would want to spare theirs from a scrap pile.

Because I have not been able to prove satisfactorily that the two missing cars were destroyed, I believe there’s still a chance that one or both is out there, somewhere. But even in this age of information, there’s shockingly little relevant material available online; dig far enough into any topic, and you’ll realize that much of the impressive volume of content online is a jumble of the same facts, half-truths and speculation repeated over and over again.

The quintet of original Silver Arrows did ultimately lead to a run of vaguely similar eight- and 12-cylinder production models with the same name. They’re rare but not quite as spectacular as the extravagant, flamboyant show cars—and they make doing research on the original five a lot more complicated. When we’re able to travel freely again, I plan to do a deep dive into the story of the five Silver Arrows, incorporating original research using information only available in physical archives.

Stay tuned for that. Until then, I’ll dream of finding one in an old dilapidated barn someday.

I think everyone has a story about a car they’d love to discover (or discover again). What’s your dream find? It could be as rarified as a Bugatti that disappeared three-quarters of a century ago or as humble as a high-school ride stolen out of your driveway when you were just a teenager. Maybe it’s an Ed Roth kustom or a missing racer. Whatever it is, I’d love to hear about it.

Sign up to leave comments and share with us what long-lost car you hope to one day find.