The 2022 McLaren Artura is notable not just because it’s a new McLaren. It represents a new era for McLaren—one of electrification without sacrificing the very thing McLaren is known for: performance. Back in February, we gave you an initial look at the hybrid car’s impressive stats. More recently, McLaren shed additional light on the Artura, as well as what powers it.

But first, let’s back up a bit. At the Goodwood Festival of Speed in 2018, the British automaker announced its £1.2 billion ($1.7 billion) Track25 business plan, which included the promise of hybridizing the entire McLaren sports car and supercar range by 2025. Now, three years later, the 2022 McLaren Artura is the first manifestation of that promise. Famously, McLaren unveiled the very exclusive hybrid P1 hypercar
at the 2012 Paris Motor Show. Production ran from 2013 to December of 2015 with 375 cars built in total. McLaren revealed during last week’s deep dive that planning for the Artura began in 2014 and 2015—well before P1 production had ended. And though it didn’t provide the target Artura numbers, I imagine McLaren has plans to build more than 375 of them, considering its $225,000 price tag and placement in the lineup. The Artura is not part of the uber-exclusive Ultimate Series, after all.

What it is, though, is the first car to use McLaren’s new McLaren Carbon Lightweight Architecture, or MCLA, which is specially designed for hybrid cars. The MCLA is comprised of three main elements: an electrical structure, a chassis structure, and a carbon fiber monocoque. That monocoque itself is made up of more than 500 individual bits of carbon. Like in all road-going McLarens, the monocoque cuts down dramatically on weight while also providing excellent chassis stiffness.

You’ll also notice the tub lacks a central roof support beam like the 720S’s chassis’s got, which probably means a convertible version of the Artura is imminent. No guarantees, however! 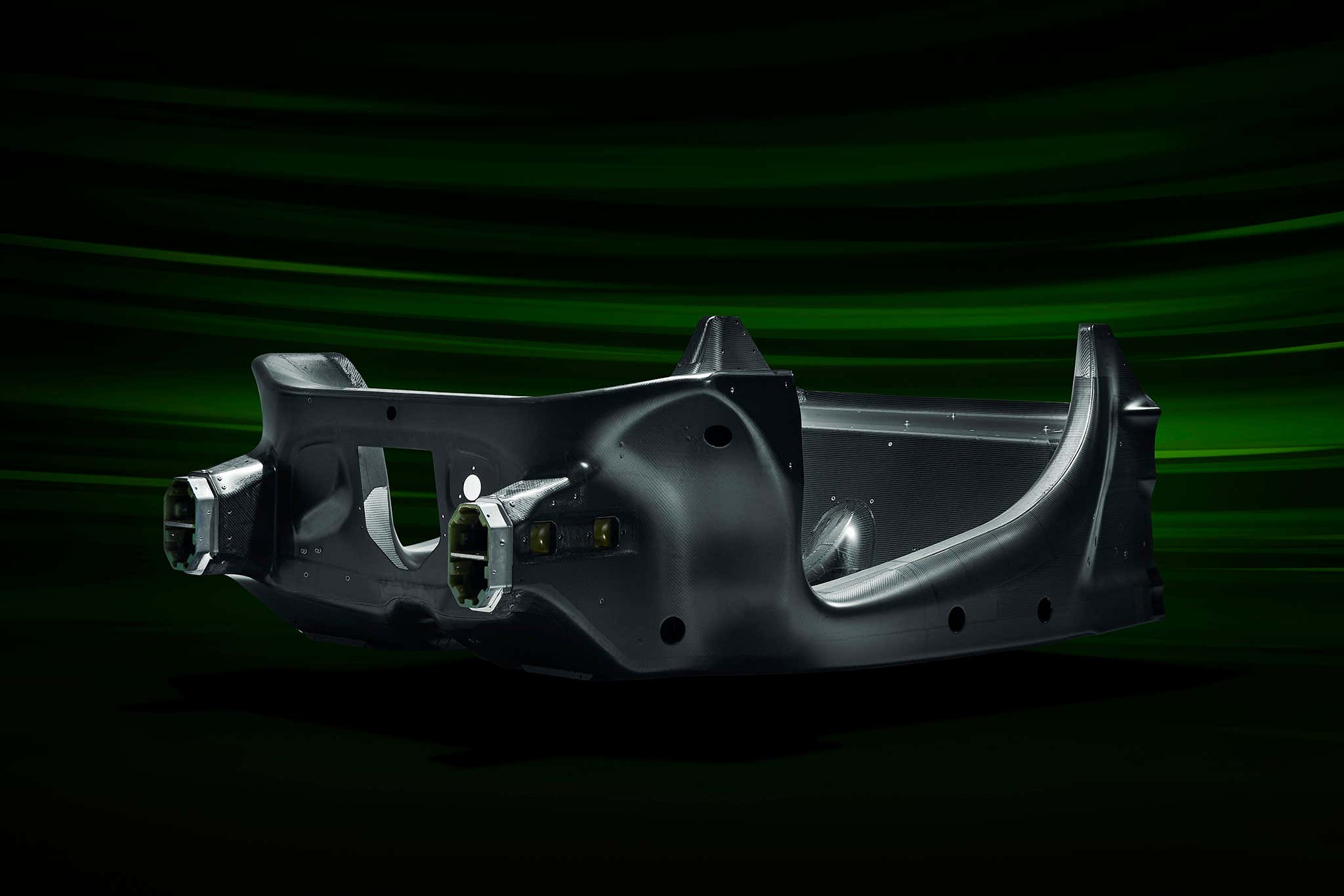 But the star of the show has to be the all-new, 3.0-liter twin-turbocharged V6 nestled at the heart of the Artura. Those paying attention will know this is the first V6 to ever appear in a production McLaren.

Codenamed the M630, McLaren says it was “engineered from the ground up” to fit into the MCLA platform. Special attention was paid to packaging, which explains why it uses a 120-degree “hot vee” layout—meaning that the turbocharges are located within the valley of the engine—so McLaren was able to lower engine height by 1.6 inches as compared to the M840T twin-turbo V8 found in the 720S. Engineers were also able to cut down M630’s length by 1.1 inches because the bore is 0.35 smaller than the M840T’s.

In total, the M630 is 7.5 inches shorter and 8.7 inches narrower than the M840T. Weighing in at 353 pounds, the V6 is also 110 pounds lighter than the V8. On its own, it produces a claimed 577 horsepower and 431 lb-ft of torque. When combined with the e-motor—which is located between the engine and the transmission and itself makes a claimed 94 HP and 166 lb-ft of torque—the Artura’s claimed total system output comes to 671 HP and 531 lb-ft of torque. All with an estimated 3,303-pound curb weight. 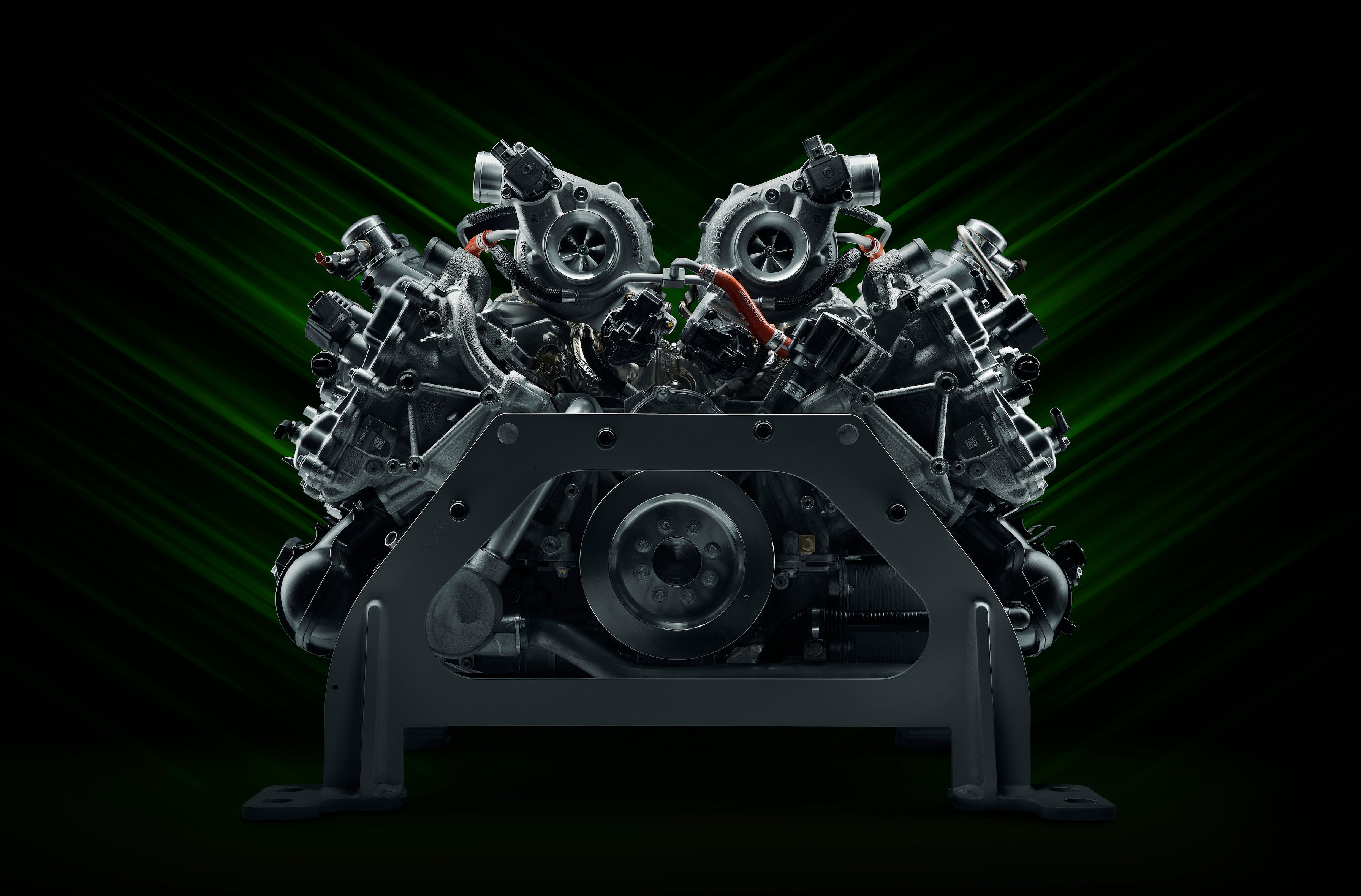 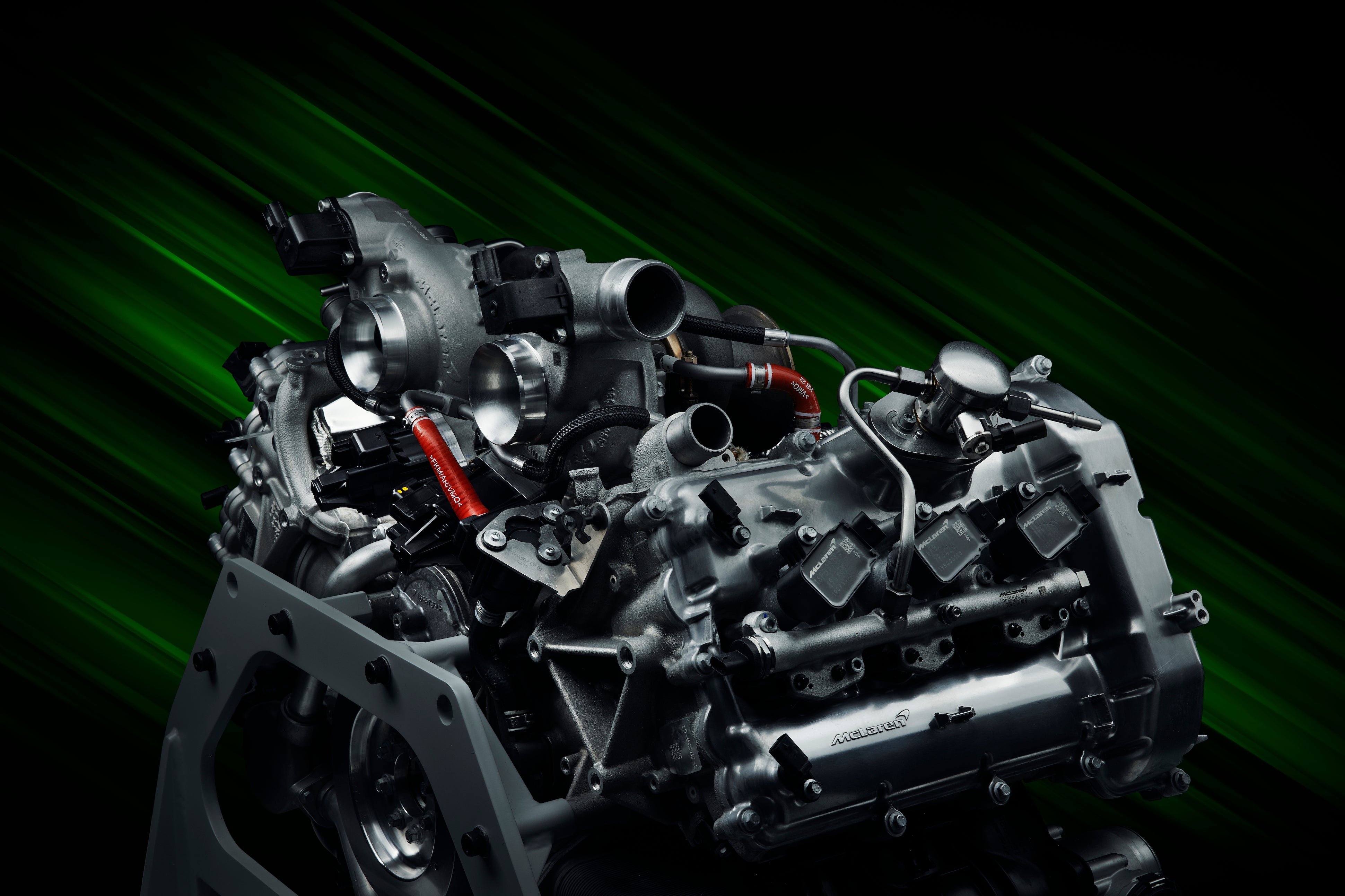 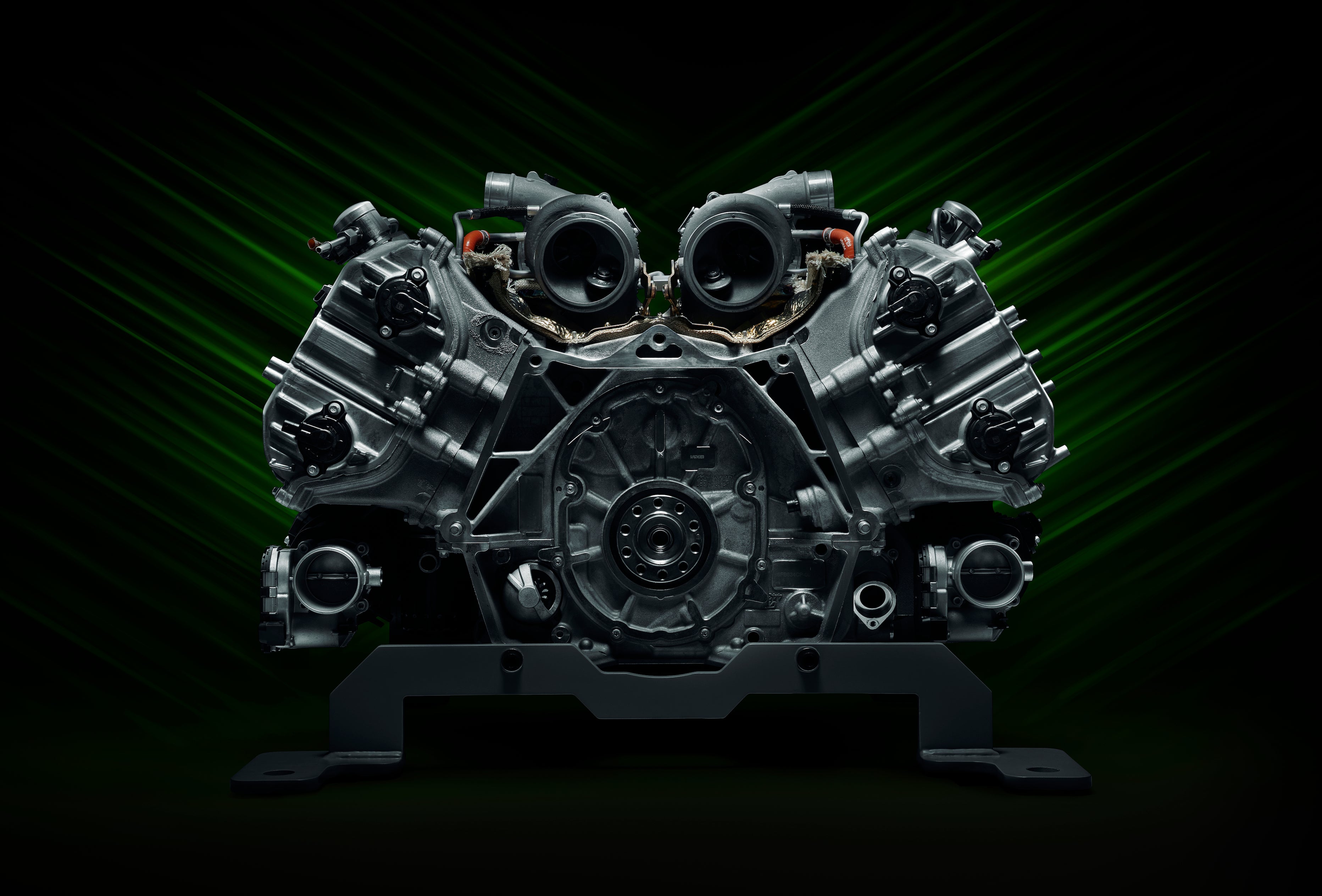 That’s still quite light, hybrid powertrain and all. The car’s hybrid bits account for just 287 pounds of its curb weight, according to McLaren. That includes the 34-pound e-motor and 194-pound battery pack. The new e-motor is less than half the weight of the one found in the P1 but has 33 percent more power density, according to Sunoj George, McLaren’s head of electric drive technology.

Interestingly, in an April 2021 press release, McLaren reported a 180-degree angle six-cylinder engine was considered for the Artura. If I let my imagination run wild for a second, that could have meant a midship, hybrid flat-six McLaren supercar. But nothing of the sort came to fruition, as McLaren also said the idea was “dismissed because it would raise the height of the crankshaft and therefore the center of gravity of the car.” So it went with the wide-angle V instead.

Still, it’s fun to think about. Why did McLaren initially consider a flat-six? What advantages did it see a flat-six providing? Were any flat-six Artura prototypes ever built? What other engine configurations did it consider before settling on the 120-degree V6? 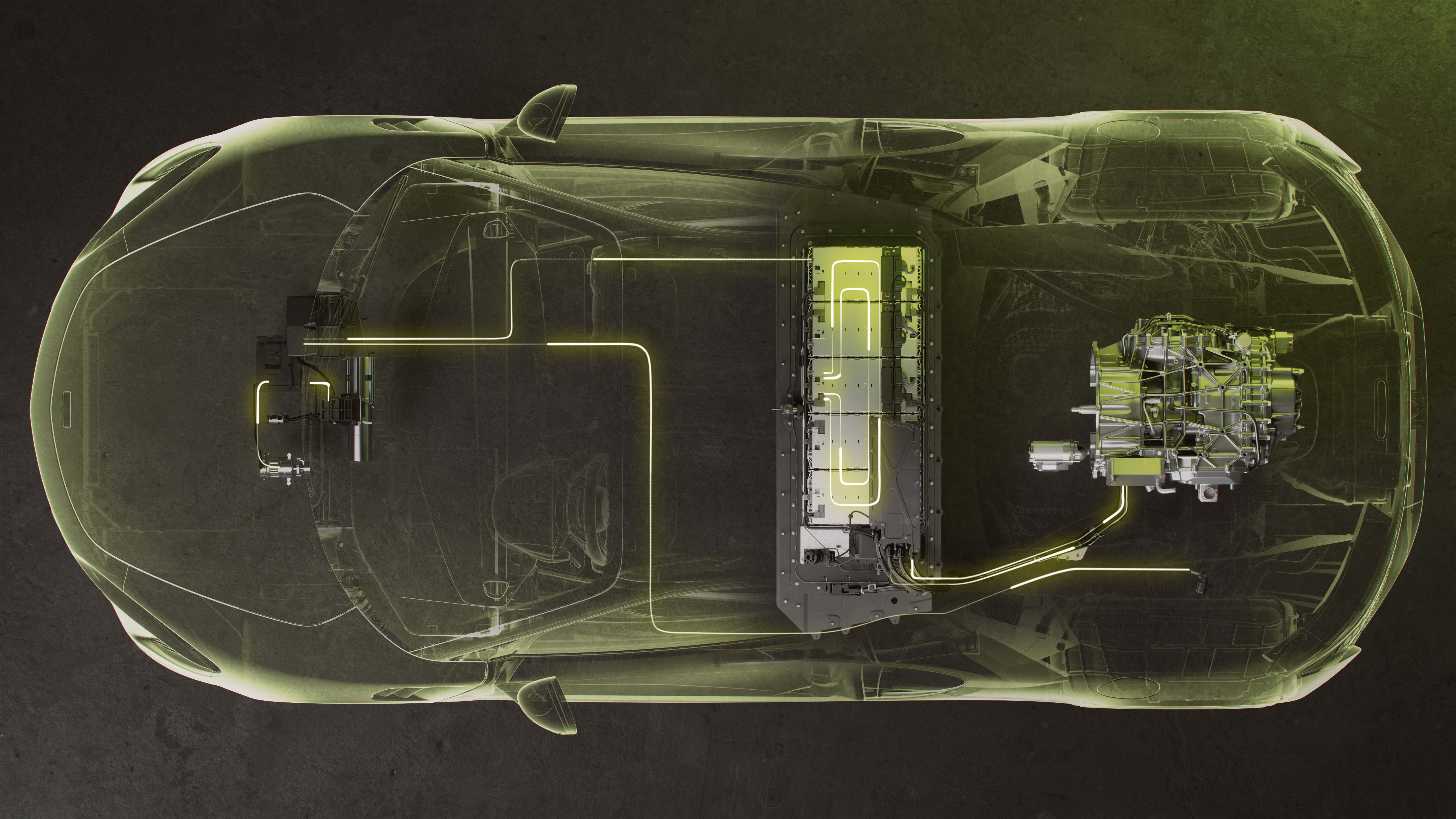 But Richard Jackson, McLaren’s head of powertrain, put an end to my musings. “It seems like a casual comment made in an interview with a journalist about 180-degree angle has been given much more significance than intended,” he said. “The 120-degree V-angle for the new engine was locked in back in 2014. There were no detailed design studies done on anything other than the 120-degree V-angle.”

Flat-six or not, the new plug-in hybrid Artura should be quite the performer. It also wears the aerodynamic uniform you can expect on all modern McLarens by now, as well as the show-stopping dihedral doors. And with the claimed 19 miles of electric-only range, you can sneak silently around the cul-de-sac without waking the neighbors. 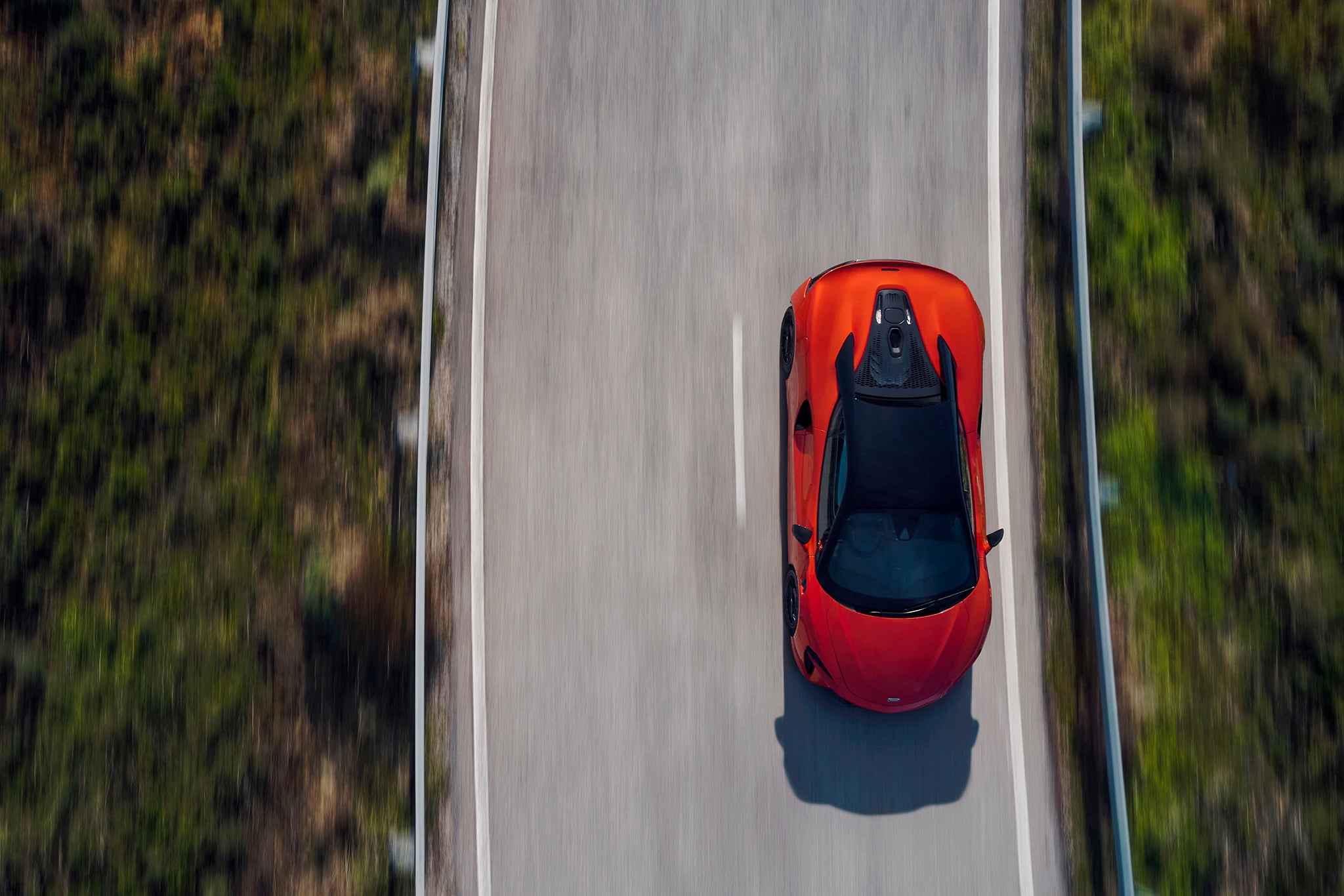