As pickups keep getting bigger, many are longing for the days of the once-diminutive Ford Ranger, Chevrolet S-10, and Toyota Tacoma. These trucks have scaled up from their mini-truck days into genuine midsize rigs, dwarfing their historical counterparts. Judging by the spy shots captured by the folks at the Maverick Truck Club, a forum dedicated to the upcoming Ford Maverick, the calls for a compact truck are being answered. 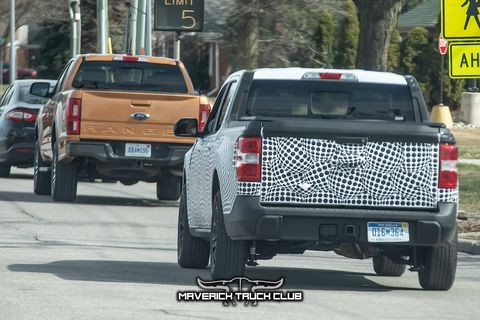 The upcoming Ford Maverick was spotted next to Ford’s revived Ranger—and it looks small. While it won’t be possible to say exactly how small it will be until Ford releases the official facts and figures—details so far have been very light—it does look noticeably smaller than the midsize Ranger.

It remains to be seen how the public accepts the Maverick. The Honda Ridgeline, for its own part, isn’t exactly setting the sales charts on fire, and there’s competition coming from the compact Hyundai Santa Cruz that could enter the market around the same time. All that said, looking back at the wild success the previous Ranger had during its run, and the rampant success of the Ford F-150, we’re pretty sure Ford knows how to sell trucks.

If you want to see more pictures from this test, head over the Maverick Truck Forum here.

Would you be interested in a unibody compact pickup from Ford? Let us know in the comments below.