Tesla Is Crushing More than Just the EV Market

The world knows Elon Musk as a wide-eyed dreamer and mercurial dude. He wants to send people to Mars, tunnel his way to a world with less traffic, wants to put neural interface microchips in people’s brains, and will pay $44 billion for Twitter. How many of the world’s richest men have hosted Saturday Night Live?

There’s also the car business, which he has single-handedly disrupted with Tesla Motors, a company valued at a trillion dollars, depending on the day.

Tesla makes nothing but battery-electric cars—and absolutely owns the market until other established automakers roll out enough new EVs in an attempt to seize some market share.

What’s been lost in the auto industry’s late-pandemic haze of the past six months is Tesla’s sales performance relative to the entire industry—not just other EV makers. In terms of volume, we know Tesla has been clobbering the (well-received) Volkswagen ID.4, Ford Mustang Mach-e, and Porsche Taycan. Tesla reportedly owns more than 70% of the EV market in the US.

Stack up Tesla’s performance against makers of conventional piston-powered cars, and the results must send a chill from Detroit to Wolfsburg to Tokyo. It takes some legwork to establish apples-to-apples comparisons. While other automakers report sales by region generally once a quarter, Tesla only reports two numbers every quarter: total vehicles produced globally and total vehicles delivered globally.

Recently, Tesla said it produced more than 305,000 vehicles and delivered more than 310,000—clearly including some vehicles made in the fourth quarter of 2021. The folks at Kelley Blue Book have done their best guesstimating and determined that, of those 310,000 vehicles sold worldwide in the first quarter, Tesla sold more than 125,000 of them in the US.

Here’s where things get interesting. In the US, the more recently launched Model 3 sedan and Model Y crossover would make up the vast majority of those sales. The KBB analysts say Tesla sold 46,707 Model 3s in the US in the first quarter and a whopping 71,358 Model Ys in the same period. 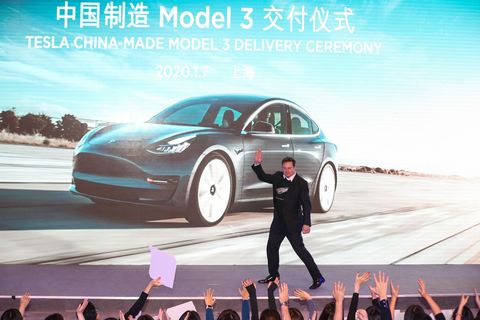 Now let’s compare the Model 3 and Model Y to the non-electric vehicles in those respective segments. Based on size and price, Model 3 would compete with midsize luxury cars such as the Acura TLX, Audi A4, BMW 3-Series, Cadillac CT4/CT5, Lexus ES, and Mercedes C-Class. Those are the popular models in the segment, and there are a dozen more that sell in lower volume. For years, it’s basically been a battle for supremacy between BMW, Mercedes, and Lexus.

Here’s how Tesla stacked up to them in the first quarter in US sales:

Mercedes C-Class will come on strong later in the year, but the first-quarter sales numbers are way down due to model changeover.

If we look at sales for the Model Y, the grossly uneven trendline is essentially the same.

For context, the Mustang Mach-e resides in this segment as well and finished the quarter with a respectable 6734 deliveries.

There are a lot of reasons for these lopsided sales results: Tesla has managed to better navigate component supply shortages than many automakers, and Tesla still benefits from its status as an outlier, an alternative to the status quo. Lots of buyers are ready for a big change.

“With Tesla’s recent sales performance, we can no longer think of Tesla as somehow a separate EV brand,” says Michelle Krebs, executive analyst at Cox Automotive, which also owns Kelley Blue Book. “It is a full-fledged luxury brand that challenges and sometimes beats the established luxury brands.”

With more than 125,000 US deliveries in the first quarter, Tesla outsold BMW, Mercedes, and Lexus by at least 50,000 units. That means Tesla crushed brands that sell in even lower volume: Audi, Cadillac, Chrysler, Dodge, Land Rover, Lincoln, Mazda, and Volkswagen. Tesla nearly outsold Subaru and was less than 10,000 units from reaching Ram. We’re talking about all vehicles sold by these brands—not just a smattering of battery-electrics. At what point will rabid demand for Teslas level off?

Of course, one quarter is merely a skirmish in a protracted battle that will be waged for years from brand to brand and startup to startup, and the weapons will be both electric motors and fading internal-combustion engines. Legacy automakers are bought in to electrification, and Tesla’s wild ride—and the first-quarter sales results—illustrates precisely why some automakers are going all-in, ready to swear off piston power at a certain point.

Tesla’s first-quarter smackdown was not an isolated phenomenon. In 2018, when Model 3 production was fully ramped up, it instantly topped its segment while sales volume for the Mercedes C-Class, which led the segment in 2017, fell more than 20%, recalls Paul Waatti, manager of industry analysis at AutoPacific.

Again in 2020, when the Model Y went on sale, it overtook the segment. Nearly all nameplates in the segment lost market share, including 2019’s best-selling BMW X3, which saw volumes drop around 15%, Waatti says.

“Some of the core tenets that designate a traditional luxury vehicle—like impeccable build quality, fit and finish, and premium appointments—don’t necessarily need to apply for a Tesla buyer,” Waatti says. “In reality, Tesla’s products don’t compete with many of the luxury products it conquests by established standards.”

With Tesla dominating the luxury ranks, it makes sense that BMW will launch its new flagship 7-Series sedan later this year with both battery-electric and combustion engines. If the manufacturing model is flexible enough, BMW can pivot to meet demand for either propulsion system.

This could be an expensive strategy in a full-size luxury sedan segment that has fallen dramatically over the past decade. But BMW doesn’t have much choice: Its current-generation 7-Series, along with the Audi A8, Porsche Panamera, and even the spectacular new Mercedes S-Class were handily outsold in the first quarter by the Tesla Model S—a car that’s been in the market for a decade and is badly in need of a complete re-engineering.

And yet, thousands of well-heeled buyers still want it.

As Tesla launches new or redesigned models, such as the Cybertruck, do you expect the brand to continue widely outselling its rivals, whether gasoline-powered or all-electric? Please comment below.