Land Rover brought the Defender to the US for the first time in the 1990s, but it certainly didn’t bring all of them. Deep-pocketed North American Land Rover enthusiasts received the 90 and 110 flavors of the V8 Defender NAS, and that’s about it. Those who kept those V8 Defenders ended up losing almost nothing in depreciation over the next 20 years, and can still sell them today for pretty close to what they paid for them, if not more. If they had accumulated only modest miles, some profit could even be in order, minus the upkeep costs, making those Defenders as collectible as something like an air-cooled Porsche from the same period.

Those who wanted a Defender 90 or Defender 110, but were confined to the limited number of NAS examples, now have their pick of almost any version or engine, as the vast majority of Defenders are now importable via the 25-year rule. But now that almost everyone’s had their fill of Defender and Series wagons, Defender and Series pickups are seeing a surge in interest.

Land Rover produced quite a few different truck versions of the Series 4x4s since their debut, with different wheelbases and configurations. But we’ve only been seeing the later pickup versions arrive stateside for a few years now. 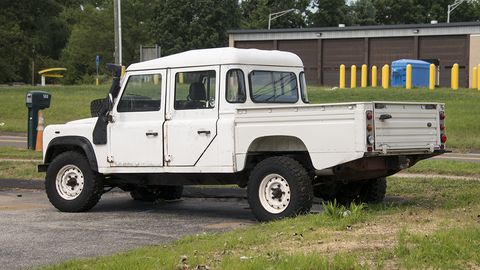 Far from the generously optioned NAS Defenders, the pickup trucks we’ve seen stateside tend to be British farm-spec examples with small diesel engines, more than a few dings and some corrosion issues. Just about the smallest engine on the menu was a 2.2-liter inline-four turbodiesel, courtesy of Ford, but a couple of larger 2.4- and 2.5-liter inline-four and inline-five turbodiesels were also on the menu, all with well below 200 hp on tap. Five- and six-speed manual transmissions were the usual choices when it came to these trucks.

This one appears to be a “bitsa” wearing a Land Rover 110 badge, but it clearly has the wheelbase of the 127 model, which is how these were known before the Defender 130 badging arrived in the early 1990s. The bed and the front fascia appears to have been fitted from a different vehicle, but thankfully we also have the license plate data, obtained via the UK’s publicly available plate database.

The license plate implies that this as a 1987 model equipped with a 2.5-liter turbodiesel engine, originally finished in white, and last registered in 2015. So it came into the US relatively recently.

“In Double Cab format the 130 combines the practicalities of both a high capacity Pick up and a Station Wagon,” ad copy of the time promised. “It is part of a wide range of vehicles offering proven capability, reliability and unequalled parts commonality across diverse applications.

“Qualities that combine to make a cost-effective tool for a business or organization, on its own or as a part of a fleet. Versatility is inherent in the design and construction, tailoring to bespoke requirements is straightforward.” 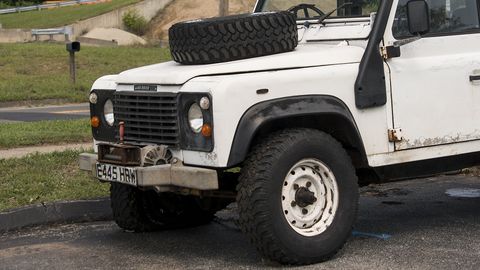 Demand for ‘fender trucks is such that it often makes sense to do a quickie restoration back in the UK, where parts are more plentiful, before fitting some crowd-pleaser parts-bin items like larger wheels from higher-spec Defender SUVs, newer grilles, in addition to far more comfortable, modern seats. So it’s not uncommon to see Defender pickups stateside that had been purchased for just a couple of thousand quid, and then had been given another few thousand in work, including a respray and some equipment upgrades. After shipping, sellers have been able to command serious premiums once the trucks looked presentable. And of course, there is now no shortage of Land Rover specialists stateside that can easily fit around $75,000 worth of upgrades to a Defender from the 1990s, ranging from suspension components to sound systems, with the only limit being the owner’s checkbook. We’ve certainly seen more than a few built to a $125,000 standard, and that’s hardly the ceiling these days when it comes to restored and upgraded Defenders.

Then again, it’s still possible to spend as few pounds sterling as possible in importing a truck, even though they’re certainly in the minority stateside. For every 30 over-restored and over-equipped Defenders, we’ve seen one or two that seemed they’ve just left a farm in the Midlands on tires bought in 1995, with diesel engines clattering as they move about carefully. And that’s what this one appears to be.